Earlier this year the International Journal for Creative Media Research (IJCMR) published a journal article by Annie East, Deputy Head of Media Production Department at BU, on ways students make meaning of the risk assessment process on their undergraduate filmmaking degree. Based on Annie’s doctoral pilot study findings, this article, whilst written in a pre-covid19 environment, has 5 areas for consideration of health and safety going forward in a Covid-19 student fieldwork context. Below Annie considers how we conceive health, safety and risk before outlining 5 points.

What is safe? The social construction of safety

Safety is a subjective, constructed and socially derived notion. The Health And Safety Executive literature does not define what safety is, leaving companies and organisations to interpret or translate how that applies to their practices. Similarly risks are ‘selected’ and ‘risk is only what people choose to say it is.’ As for health, we follow current advice in how to understand what is ‘good health’.

To give more clarity we could consider the terms ‘health’ and ‘safety’ from within the industrial context in which they are being used. Since my research is about filmmaking (in an HE context), when we refer to safety at work we can consider a film set in a studio; a lighting electrician may fall off a ladder that isn’t secure and this is a result of non-safety, or ‘unsafe-ness’. When we talk about health we can view the same studio where a set designer is carrying heavy props and as a result of that act, potentially, over time, this will create health problems, linked to heavy lifting, for that person. Safety is therefore constructed by us with an immediacy, whether perceived as safe or unsafe, and health is constructed as more removed from the act, alluding to future constructs of ailment/s within the body (or mind).

So with a socially constructed definition of health and safety the linked article can be read, taking into account the added consideration of working practice and Covid19 outlined in 5 points below.

In the article I propose a new research method; VR elicitation. A two-tier practice of placing a 360-degree camera into fieldwork (in this case a student film shoot) and then viewing it back as a way of deepening reflective and reflexive practice for both educator and student through an immersive environment. In response to innovation around education during Covid-19, VR elicitation could be utilised to enhance, learning for students who may not be able to engage as fully with fieldwork. This would be through remote learning ‘in the round’ with peers and educators taking advantage of the immersive environment. Working with apps that can download onto smartphones and be slotted into a £30 VR visor. 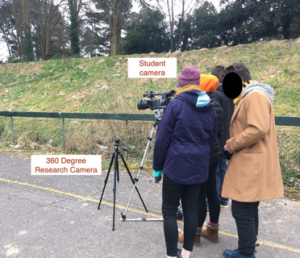 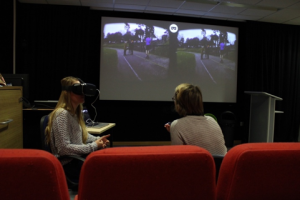 2. The paradox within HE

The article highlights the paradoxical nature of working in a tripartite environment; education that teaches industry practice whilst complying with HE rules. With the extra layer of Covid-19 risk management incorporated into our health and safety practices, it is worth fully understanding the paradox presented within the article.

3. Risk as imagined, risk as performed

4. Working beyond bureaucracy in risk management

The article posits holistic ways to approach risk management that involves engaging HE students more thoroughly. Moving us away from purely bureaucratic tick box exercises of writing a risk assessment towards a shared ownership of risk management strategy or otherwise referred to as ‘institutional magic’ by Patrick Brown. This holism is essential now that we are dealing with an invisible risk.

The pilot study teases out some of the ways students inherently keep themselves safe and are examples of where the imagined is very different to the performance. This reminds us of the importance of developing shared ownership of managing risk rather than staying purely with top-down implementation that is tied to institutional and legal power structures.

Doctorate via Centre of Excellence for Media Practice (CEMP).

Fusion BU2025 looks to ensure that students are informed in the ‘latest thinking in practice and research’ it also looks to ensure graduates are ‘innovative’ and ‘have research skills’. The doctoral research that Annie East is engaged with seeks to discover the ways in which students are working with health and safety risk management processes on their location film shoots. The pilot study looked to test the use of a 360-degree camera on a student shoot as a Virtual Reality (VR) elicitation tool for data gathering . Here Annie East and first year student, Rowan Prosser, reflect on his role as student research assistant, working with the 360 degree camera on a second year student film shoot.

Rowan Prosser: As a first year student the opportunity to work on academic research was both intriguing and a great opportunity to learn. The project gave me a chance to see how research is carried out in an academic way, seeing the correct processes of it all. It was all carefully considered and planned accordingly, my needs and any questions I had were answered immediately; something you don’t get when working with other students. When planning for the pilot project, the meetings that took place were well informed. In contrast, when I work with fellow students, there is sometimes difficulty in getting to the point of the discussion or the heart of the problem.

Annie East: Finding a student keen to work on research that was testing relatively new technology was key for this pilot. Meeting with Rowan for the first time as a researcher rather than as lecturer was a turning point. The power dynamics of student/lecturer dissolved with Rowan becoming more of an equal in our journey to master the technology and workflow of the camera. I chose to work with a student to lessen the power dynamic on the student film shoot; taking myself physically away from their shoot and allowing a student to operate the 360-degree camera. Reflections on the approach.

Rowan Prosser: It was an interesting scenario to be surrounded by second year BA Television Production students. Due to the role I had (responsibility for the 360-degree camera) they all tried to adhere to my needs and requests throughout the shoot. This allowed me to make sure that my camera work was achieved. If I was in the way, they would politely ask me to move the camera. The kit used really interested me; 360-degree video is something that is slowly coming into the fold – people (including the 2ndyear students I was working with) are very interested in the camera and how it works. This allowed me to educate and show them.

Annie East: Interestingly it is not just the power dynamics of lecturer/student that are changing with this work but also student-to-student interactions. The collaboration gave Rowan a new perspective and a window into the world of a second year student film shoot, levelling the inter-year dynamics somewhat. Silently it also afforded him institutional power; he became the educator and sage.

Reports from the field.

Rowan Prosser: Observing second-year students on their film shoots gave me the ability to blend in since I was a fellow student.  We were able to talk about the course, topics we enjoyed thus allowing the presence of a camera filming their every movement less uncomfortable. It was interesting to observe the similarities of 2nd-year students to 1st years on the shoot. The classic way in which clear leaders can sometimes emerge and take over other people’s role was seen, this being an issue with student filmmaking, when someone isn’t happy with how someone else is conducting their role.

Annie East: Rowan’s reflections display some of the key tensions in setting up this research project; how do we observe students in the field and in what ways does that change the way they behave. This pilot confirmed going forward that the data to be captured is not the footage itself but the conversation about the footage when each crew member put on their VR visor to re-immerse themselves back into their field. This shifts the research focus away from behaviour and towards reflections on action and reflections in action.

Rowan Prosser: I really enjoyed the experience, as the opportunity to carry out research for an academic is not something that happens a lot. It gave me a clear insight into the future on how I can carry out future research and also taught me a lot about 360 cameras which I have not previously used. The group of second year students responded very well to me being around, and in the group, so it would be interesting to see how other groups would react to my involvement.

Annie East: These reflections suggest a shift in student identity and changing power dynamics between researcher and student and between student-to-student. The confidence that this work appears to have afforded Rowan sets him on the path of the lifelong learner; someone thirsty for new challenges. The challenge for BU2025 is the possible perception that working on academic research is a rare experience. Going forward Rowan can choose to be part of the full study and be more experienced for it; a scaffolded approach to collaborative research rather than a siloed one. The vision of fusion in BU2025 features a strong sense of inclusivity which we can promote to our students creating not only rounded academics but also fully rounded students, confident to take on ‘intriguing’ research projects.

Foucault, M., 1991. Discipline and punish. The birth of the prison. London: Penguin.