This innovative HEIF-funded project aims to test the use of flow cytometry for its ability to replace outdated and labour-intensive ways of working (microscope assessments) for the detection of harmful algae in coastal waters. This is a research need currently under consideration by U.K. Centre for Environment, Fisheries and Aquaculture Science (CEFAS) government scientists but is not a service offered commercially by any environmental consultants. The societal need is food safety: harmful algae can accumulate in shellfish and cause human poisoning, resulting in conditions known as amnesic, paralytic and diarrhetic shellfish poisoning (ASP, PSP and DSP). Harmful algae are therefore monitored by both shellfish producers and public health scientists. Shellfish production is a significant part of the regional economy of Dorset (Poole Harbour is a major national site of oyster and mussel production for example) and harmful algae have been detected locally, sometimes resulting in shellfishery closures which can have major economic impact. The project is funded until summer 2017 and the core team is composed of Ian Chapman and Dan Franklin in the Department of Life & Environmental Sciences, with support from other LES colleagues via a project board.

BU academic Dan Franklin and PhD student David Hartnell presented research in Wuhan, China during the 10th ICTC last week. Attracting about 350 delegates, and sponsored by the Chinese Academy of Sciences, the conference was concerned with the growing problem of toxic cyanobacteria in freshwater resources and the ways in which ecological and health consequences can be reduced. Toxic cyanobacteria are a particular problem in China, where they have contaminated public drinking water supplies creating a serious public health issue. Dan and Dave gave 4 presentations at the conference on work carried out with BU colleagues Ian Chapman, Su Chern Foo, Eddie McCarthy and Prof. Genoveva Esteban. Dr. Andy Turner from the government biotoxin labs at CEFAS, Weymouth, an important collaborator on the BU work, also presented at the conference. The conference was a great success and enabled meetings with important researchers in the field from around the world. Dan and Dave would like to thank BU for funding some of the expenses of the trip. 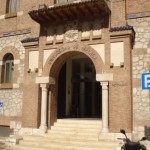 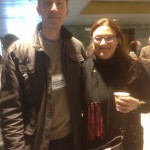 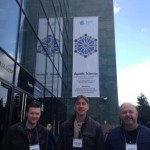 Dr Daniel Franklin (FST) recently visited colleagues from the University of Malaga in Spain, a Santander Partner University, and also attended the Association for the Sciences of Limnology and Oceanography meeting in nearby Granada. This meeting had 2,500 delegates from 65 countries and used a parallel session format to present cutting-edge science from across the myriad disciplines involved in the study of aquatic systems.
During the visit Dan discussed research ideas with Dr Maria Segovia of the University of Malaga and met members of her research group. Discussion focused on the measurement of phytoplankton dynamics during large-scale ecosystem manipulations (mesocosm experiments) which are designed to test the response of the microbial food web to CO2 enrichment. Dan also discussed the possibility of student and staff research exchanges with Dr Segovia and this will form an ongoing process.
At the conference BU FST PhD students Ian Chapman and Dave Hartnell gave excellent presentations to leading lights in the fields of cyanobacteria management and phytoplankton assessment. The conference was excellent in the range of opportunities it provided to meet with and discuss research with world-leading specialists. We are now planning a submission to a high-impact factor journal which will publish proceedings from the conference. Overall, a very successful visit. Thanks to Santander for the funding.

Dr Daniel Franklin from the Faculty of Science and Technology has been awarded funding from the Santander strand of the Fusion Investment Fund to establish working relationships and collaborations with the University of Malaga, Spain, a Santander Partner University.

The Department of Ecology and Geography at the University of Malaga hosts an active group of researchers interested in the response of aquatic ecosystems to increased CO2. Members of the Malaga research group have recently worked at the prestigious international mesocosm facility at the University of Bergen (Norway) which allows large-scale experimental manipulation of the aquatic environment to test research hypotheses. They have also used this powerful approach in their work in the Mediterranean. The Malaga group have just (late 2014) published a series of papers on the effects of CO2 enrichment on aquatic ecosystems.

Dan applied for and was awarded funding to visit the group in February 2015 in order to facilitate networking with the aim of establishing joint EU research proposals in the future and also researcher visits to BU. In addition to these activities, there is an international meeting of the Association for the Sciences of Limnology and Oceanography (ASLO) in nearby Granada (22-27 February 2015) for which two BU PhD students have had abstracts accepted and Dan will now also be attending the conference.