We are pleased to announce the release of Cross-Disciplinary Approaches to Prehistoric Demography, a themed issue of The Royal Society Philosophical Transactions B series, compiled and edited by Philip Riris and Fabio Silva from the Department of Archaeology & Anthropology at BU, in collaboration with colleagues Jennifer C. French (University of Liverpool), Javier Fernandéz-López de Pablo (University of Alicante, Spain) and Sergi Lozano (University of Barcelona, Spain).

Demography impacts a wide range of aspects of human culture past and present: from our capacity to transmit genes and knowledge across generations, to the reach of our social networks and long-term impacts on the environment. Recent cross-disciplinary advances in the reconstruction and interpretation of prehistoric population histories (palaeodemography) have been transforming our understanding of past societies. This theme issue integrates the efforts of researchers working across archaeology, anthropology, genomics, palaeoecology, and evolutionary demography, combining original research alongside critical reviews, to provide a benchmark for the state-of-the-art in prehistoric demography and a statement of the future of this rapidly growing cross-disciplinary endeavour.

The themed issue, which includes an open-access manifesto for palaeodemography in the 21st century and several other open-access articles, can be found here. 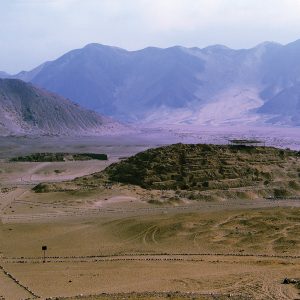 A view across Caral, one of the earliest urban centres in the world and a key study site for research on prehistoric population history, such as reported in this theme issue. This site, 200km north of Lima in Peru, was inhabited roughly between the 29th and 19th centuries BC by the Norte Chico civilization. The mound seen in the centre is the “Edificio Piramidal la Cantera” (the Quarry Pyramidal Building) and the building in the left background is the “Edificio del Altar Circular” or Building of the Circular Altar. Image credit: Daniel Sandweiss.