Dr Mel Hughes, from the Centre for Seldom Heard Voices, was asked by Urban Markström and Ulla-Karin to join them as part of an advisory board for a project, for which they have received a six-year research grant regarding service user involvement in community mental health.

All researchers in the research program, called called ‘UserInvolve’ are members of a Swedish research network called Centre for Evidence-based Psychosocial Interventions (CEPI). A couple of times a year, they arrange seminars, where they introduce current themes or discuss a variety of ongoing projects. Participating are both senior and junior researchers, and people with lived experience of mental illness (often representatives from service user organisations).

Mel was invited to present at the seminar series on 10th November 2021 and the session was really well received and triggered a great discussion on parity of participation and how we need to change the research system to make involvement more inclusive. The day after the event, Ulla-Karin said ‘talk in the hallways today is that people are very enthusiastic and inspired by your talk on CEPI, yesterday’.

Mel is now working with Ulla-Karin and other colleagues to Guest edit a Special Issue of the British Journal of Social Work on The Voice and Influence of people with lived experience.

A lovely day by the river Stour on Friday 24th saw around 40 delegates and Bournemouth University staff come together to celebrate the launch of the National Centre for Post Qualifying Social Work’s new Mental Capacity Toolkit- mentalcapacitytoolkit.co.uk.

Funded by the Burdett Trust for Nursing, the toolkit aims to provide easily accessible learning materials and information for nurses and other professionals and is a web-based tool which can be accessed wherever a professional has access to the internet.

The project team, led by Professor Lee-Ann Fenge, Director of the NCPQSW and the Centre for Seldom Heard Voices and Principal Investigator Dr Sally Lee, undertook an 18-month long research project investigating the issues that professionals encounter in using the Mental Capacity Act 2005 and what could help to increase knowledge and understanding of the legislation and practice requirements.

The day started with an introduction into the NCPQSW and Centre for Seldom Heard Voices wider work and resources by Professor Fenge before Mike Lyne, Programme Lead for the MCA 2005 at BU and a member of the project team took delegates through the context of past and current mental capacity work at BU with a short tour of future developments. Dr Lee and Dr Debbie Slate then introduced delegates to the research themes and the detail of the project.

Dr Mel Hughes, co-director of the Centre for Seldom Heard Voices and Stevie Corbin-Clarke from the project team followed by discussing a project that they have been working on with the charity National Voices, looking at how the introduction of remote service models during the Covid-19 pandemic has affected vulnerable people and those without internet access.

After a light lunch and a warmup quiz, Emily Rosenorn-Lanng introduced the online toolkit and encouraged delegates to log on and have a “play”, and to provide the project team with immediate feedback. Comments included, “I like the visual aspect of the tool” and “I really like the reflective nature of the tool and the questions it asks” and “the quizzes are great!”

Suggestions for further developments were also made with the addition of a search function being a particular desire, which the project team hope to be able to provide this week. Another item on the wish list was the ability to print out a certificate of completion for CPD purposes. The toolkit is very much a work in progress and will be added to over the course of the next few months. The project team are happy to receive feedback and suggestions via the “contact us” details on the NCPQSW website. The toolkit can be accessed at mentalcapacitytoolkit.co.uk.

Here are some example pages of what is included in the tool: 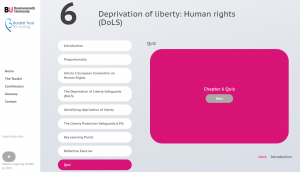 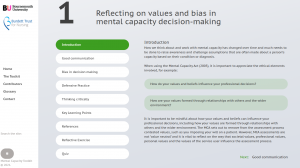 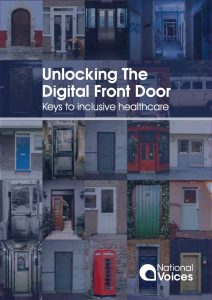 Stevie Corbin-Clarke and Dr Mel Hughes from the BU Research Centre for Seldom Heard Voices have been collaborating with National Voices on a project which aimed to develop an understanding of practical ways to support people who might find it difficult to access virtual or remote health services and who might be affected by wider inequalities.

To find out even more about the project, download the report and explore other resources, visit the National Voices website here:  https://www.nationalvoices.org.uk/publications/our-publications/unlocking-digital-front-door-keys-inclusive-healthcare

Covid-19 has meant changes in the way that people access services and accelerated a move to virtual and remote models of care – a digital “front door”. This has opened up may opportunities for  innovation to develop easier access, but has also thrown a spotlight on inequalities, barriers for people to access health and social care and a digital divide.

With the pandemic leading a move to NHS 111 First and digital first access to primary care, health and social care services must to adapt in order to be inclusive and responsive to people from all backgrounds and with a range of needs. Through our listening exercise we explored people’s experience of this rapid shift.

We hoped to explore what a more joined-up and person-centred experience of care looks like, how virtual services could meet the full range of clinical, emotional and practical needs of people at risk of exclusion and address the barriers to access and use confronting some groups. We wanted to address barriers to good care and improve health and wellbeing outcomes, particularly for those people who have high burdens of ill health and who are affected by inequality.

The report also explores how the move to remote service models impacted people and how the Voluntary, Community and Social Enterprise sector (VCSE) has led innovative ways to deliver healthcare and support people during the COVID 19 pandemic.

If you have any questions, contact Stevie Corbin-Clarke at scorbinclarke@bournemouth.ac.uk

The COVID-19 pandemic has created major upheaval across the world, and for frontline practitioners in social work, this led to sudden changes in working practices alongside homeworking. In the summer of 2020, Parliament started to conduct an inquiry exploring workforce burnout and resilience in the NHS and social care as a result of the COVID-19 pandemic. As part of this they put out a call for evidence from interested parties, and were particularly interested into early research findings. Areas of interest to the inquiry included the impact of the COVID-19 pandemic on resilience, levels of workforce stress, and burnout across the NHS and social care sectors and the impacts of workforce burnout on service delivery, staff, patients and service users across the NHS and social care sectors.

At the beginning of the COVID-19 pandemic in March 2020 Professor Lee-Ann Fenge and Emily Rosenorn-Lanng from Bournemouth University developed a collaborative research project with Tilia Lenz from the Pan-Dorset and Wiltshire Teaching partnership (PDWTP) to explore the impact of COVID-19 on practitioners and managers, and to date this has been completed by 146 participants. We submitted evidence to this inquiry based on our preliminary findings, and this has now been published by the Health and Social Care Committee.

This publication recognises the importance of the research undertaken by BU and the PDWTP during COVID-19, and the contribution this makes to understanding how practitioners have responded to the unprecedented challenges created by the pandemic.

In 2012, a study by The Housing Link and St. Mungo’s identified that two thirds of homeless patients were discharged from hospital straight back onto the streets. Despite it being included within the Care Act (2014) that provisions should be made available to adults on the basis of individual wellbeing (s.1), and the more recent Homelessness Reduction Act (2018), it appears that homeless people are continuing to fall through the net when they come into hospital. This was illustrated recently by an article in the Guardian (13/03/19) which reported figures obtained under freedom of information requests from 89 NHS trusts. It reported a shocking increase in the number of hospital discharges of people with no fixed abode. These figures have risen by 29.8% from 6,748 in 2014 to 8,758 in 2018. This has increased simultaneously alongside official estimates of the number of rough sleepers in the UK, which has risen 132 per cent since 2010 (Fitzpatrick et al 2017), and follows concerns about growing numbers of homeless deaths.

A lack of planned hospital discharge may result in a revolving door of hospital admissions. In many ways, practice in this area appears to have gone backwards. Several decades ago, when I was a hospital social worker, I spent much of my time ensuring that those of no fixed abode could be safely dischaged into some sort of housing provision. Patients would not be discharged without this assurance. In the intervening years a focus on delayed discharge payments, and a reduction in welfare provision, as a result of austerity, has resulted in increasingly dehumanised systems of health and social care provision. Those experiencing homelessness often have multiple and complex needs, resulting in ‘deep social exclusion’, yet health and social care policy and practice may be creating further challenges for those already experiencing multiple disadvantages.

To move beyond a system where being of ‘no fixed abode’ is deemed acceptable, would require a concerted effort to work effectively across agencies. Furthermore, it would require improved interprofessional communication and improved funding to offer meaningful support. At a political level there needs to be a genuine and sustained interest in an improved supply of secure and affordable housing. We must also listen to the voices of the most disadvantaged in society, to develop a more humanised understanding of what being homeless is really like. A recent project at Bournemouth University used arts based methods to engage with the lives and experiences of a group of homeless people (Fenge, et al. 2018). Their words acted as a powerful reminder of the importance of listening to people, and to not ‘have people show concern then not even listen to your answer’. However, with Brexit continuing to dominate political and public debate, we risk the most vulnerable groups being silenced as they bear the brunt of austerity politics and a failure to join up policy.

Homeless link and St Mungo’s, (2012). Improving Hospital Admission and Discharge for People who are homeless, St Mungo’s and Available from https://www.homeless.org.uk/sites/default/files/site-attachments/HOSPITAL_ADMISSION_AND_DISCHARGE._REPORTdoc.pdf