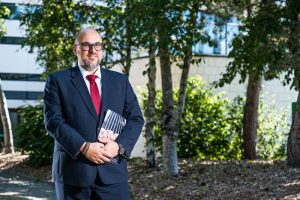 The 8th edition of BU’s annual research magazine – the Bournemouth Research Chronicle – has now been published.  This year’s edition focuses on the work of our Early Career Researchers (ECRs). Read on to find out more about research being undertaken in the Faculty of Management.

There is a population of around 82,000 prisoners in the UK, according to the Ministry of Justice. Statistics from the Prison Reform Trust suggest that 48% of adult prisoners reoffend within one year after release, with rates rising to 64% for those serving sentences of less than 12 months.

The National Audit Office has estimated that crimes committed by recent offenders costs the economy £9.5 billion to £13 billion per year. However, evidence suggests that those who go into work after leaving prison are less likely to reoffend, but this can be difficult without the right training and support.

The Clink Charity aims to reduce reoffending rates by training prisoners in hospitality skills (predominantly in fine dining restaurants) which they will be able to use in meaningful employment on release. The charity offers prisoners the chance to achieve NVQ qualifications, with the added incentive of a job opportunity and accommodation upon release. They operate five training restaurants in partnership with Her Majesty’s Prison and Probation Service. Since the Clink Charity initiative was launched in 2009, their programmes have helped to reduce reoffending by 50% among those who have graduated from their schemes.

As part of a team of researchers, BU’s Dr Charalampos Giousmpasoglou has been collaborating with the charity to critically assess the quality of training they provide. As well as being an active researcher in the area of hospitality and human resources management, Dr Giousmpasoglou has over 20 years’ experience as a hotelier in luxury hospitality and fine dining restaurant management.

“Training prisoners is always challenging. The Clink Charity is unique because there is no other fine dining training restaurant in a prison globally. As a concept, it’s very innovative, original and interesting, which is why I wanted to get involved,” says Dr Giousmpasoglou.

“My PhD research focused on people management in a luxury hospitality context, which gave me a better insight into a general manager’s job in luxury hotels. I’ve also explored the ways in which an individual’s cultural identity, occupational and organisational culture can affect their ability to succeed in the sector.

“It is really helpful to be able to use my industry experience in class, as it helps my students to develop a better understanding of the real world. It is also an advantage to be able to present myself as a former colleague to practitioners. Through carrying out research with those working in industry, I have found that even in very high-class establishments, poor management still exists.”

UK Hospitality estimates that around 6 million people are directly or indirectly employed through the hospitality industry, making it the third biggest sector in the UK economy. Although the industry faces challenges in terms of the uncertainty of Brexit and changes from the use of new technologies, it remains a thriving sector of the economy.

“I hope that my research will help to better inform staff selection and increase the standards of management within the sector, so that more staff can be better trained and retained,” explains Dr Giousmpasoglou. “By applying these insights to the challenges being addressed by The Clink Charity, I hope that we will be able to improve job retention and further reduce re-offending by former prisoners.”

Thanks to the Bournemouth University’s Acceleration of Research & Networking (ACORN) grant scheme, Dr Giousmpasoglou was able to carry out a pilot study with The Clink Charity to assess trainee prisoner satisfaction and their reasons for joining the skill building programme.

“The aim of the project was to identify the strengths and weaknesses of the programme and make recommendations regarding the programme curriculum and the participants’ wellbeing,” explains Dr Giousmpasoglou, “We focused on how the training has been implemented and received, rather than the way the restaurants are run.”

Initial results have been very positive, with the research team finding that participants reported increases in self-confidence (91.6%), in their desire to learn (83.3%), their chances of getting a job (80.6%) and their ability to cope with prison (75%).

“We found that participants wanted to take part in the programme because they were keen to usefully occupy their time, challenge themselves and increase their employment opportunities on release. As well as boosting their confidence in a number of ways, our research suggested that it was also changing their future plans. 91.7% of people reported wanting to get a job once they left prison, while 52.8% said they were interested in starting their own business or being self-employed.

“The project was only possible because of the ACORN fund and the support of the Research Development & Support team’s training and seminars. It’s given me an opportunity to test the waters, share knowledge with The Clink Charity and find out if a larger research project would be worthwhile,” concludes Dr Giousmpasoglou.