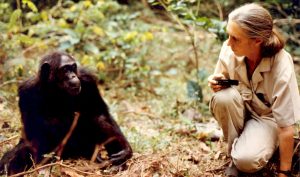 Ask a sample of natural scientists and conservation workers – especially female ones – why they became interested in the natural world, and one name comes up time and time again: Dr Jane Goodall. Dr Goodall’s incredible trail-blazing work with the chimpanzees of Gombe – flying in the face of expected gender roles and established academic and scientific practice in the field at the time – led directly to the game-changing discovery that chimpanzees used tools, kickstarting a revolution in the way that we think about our closest living relatives and ourselves. This was a change in thinking that goes much deeper than simply ‘learning new things’ about another species; the extremely close evolutionary relationship between us and chimpanzees and the many shared behavioural and cognitive characteristics that Jane Goodall was among the first to document in the 1960s changed the way we think about animals and about ourselves, and how we perceive the relationship between us and the other animals with which we share the world. Dr Goodall’s work has been central to re-imagining that relationship, moving from the entitled assumption of a stark divide between ourselves and the natural world – there to be exploited by our own evolutionarily unprecedented species – to the realisation that despite all our much-vaunted intelligence, our lives are still fundamentally entwined with those of other species, and indeed to the natural world more generally. Perhaps it is no surprise, then, that Dr Goodall’s pioneering primatological and ethnological work has evolved to include developing community conservation programmes in many African countries (TACARE), launching the Jane Goodall Institute’s global environmental and humanitarian programme Roots & Shoots which empowers young people to become involved in hands-on programmes for the community, animals and the environment, and her appointment as a UN Messenger of Peace.

Certainly Dr Goodall has been an inspiration for all of us here at IMSET, and her family roots in Bournemouth are simply the icing on the cake as far as we’re concerned, so we’re incredibly excited to announce that in conjunction with the Jane Goodall Institute UK, IMSET is delighted to host (albeit virtually!) ‘Reasons for Hope with Dr Jane Goodall DBE’. After this year, we can probably all use some reasons for hope, and if anything can provide them it will be hearing Dr Goodall speak about her inspiring work, her belief that our daily actions make a difference, and that it is up to us the kind of difference we want to make. Interested in the natural world, in understanding what makes us human, in working with young people from all cultures and societies to inspire and build a better future? Register for free on Eventbrite now and come along on Thursday 27 May 4-5pm (BST): https://www.eventbrite.co.uk/e/reasons-for-hope-with-dr-jane-goodall-dbe-tickets-147675793273.