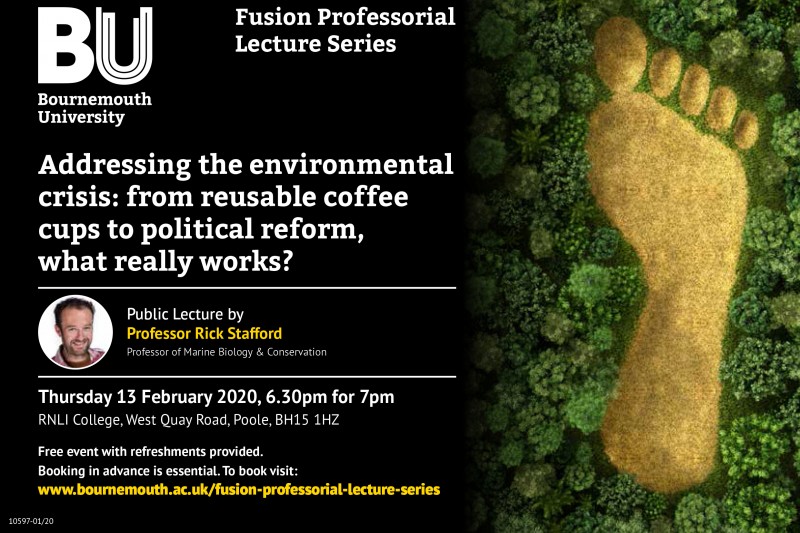 With so many reports and news stories about the environmental issues we currently face, including climate change, biodiversity loss and plastic pollution, which problems should cause us most concern and how can we tackle them?

A Bournemouth University (BU) academic will talk at RNLI College on Thursday 13 February to address these issues in the first of a series of free public lectures. BU’s Professor of Marine Biology and Conservation, Rick Stafford, will launch the Fusion Professorial Lecture Series with his talk, ‘Addressing the environmental crisis: from reusable coffee cups to political reform, what really works?’

Rick, from the Department of Life and Environmental Sciences, said: “It’s vital we address the environmental crisis properly in the very near future. This talk will bring together my research over the last two years and present a timely message that it’s not too late to act, and give a positive vision of what the future could be like if we do.”

Using his research, Rick will demonstrate that plastic pollution is a real threat, but has been overemphasised in order to maintain the economic and political status quo. His findings also show that climate change and biodiversity loss need large systematic changes in economic and political thinking to be successfully tackled, although nature-based solutions such as tree planting and a respect for nature are also important.

Rick will demonstrate the benefits to biodiversity and society of changing our approach to economics, and show that necessary changes will be advantageous to most people, both in developed and developing countries.

Rick added: “It’s very timely, and hopefully it will inspire people to support the necessary changes we need at local, national and international levels.”

The Fusion Professorial Lecture Series is free and open to the public, with six planned throughout the year, and cover a wide range of topics from BU academics.

The free to attend lecture takes place on Thursday 13 February, 6:30pm, and is ticketed. You can register for tickets on Eventbrite.