On Wednesday 9 October 2019 Stephanie Schwandner-Sievers and I hosted an international and intersectional conference involving staff, students and Erasmus colleagues to debate issues of gender, violence and conflict in contemporary societies. We were very fortunate to receive funding from the Women’s Academic Network for this event, and for additional guest speakers who will be visiting BU in the coming months to contribute to discussion on this theme.

The focus of our ‘Gender in Conflict’ conference was to provide a platform for discussion and reflection on conceptualisations of gender and violence that have heightened visibility in post-conflict environments. We asked contributors to consider what we can learn from questions of gendered violence in a fragile international context and whether international lessons can be applied to social environments in the UK.

We were fortunate to have the opportunity of the Erasmus-funded presence of two visiting Kosovar colleagues who presented at this event.  Dr Linda Gusia and Assoc. Prof. Nita Luci are the founders and directors of the Programme for Gender Studies and Research at University of Prishtina, Kosovo. They are highly visible women’s rights activists in Kosovo. The post-conflict situation in Kosovo poses unexpected challenges to equal rights not only arising from classic patriarchal cultural legacies but also from masculinity reiterations in the totalising field of international intervention.

We were also joined by two BU criminologists of our own Department for Social Sciences who are working in related fields: Jade Levell on gang crimes in the UK and Dr Shovita Dhakal Adhikari on agency and interventions within human trafficking in Nepal. This conference emerged from our own academic interests in questions of gendered hate crime in the UK (Dr Jane Healy) and on questions of social justice in transnational and post-conflict settings (Dr Stephanie Schwandner-Sievers). 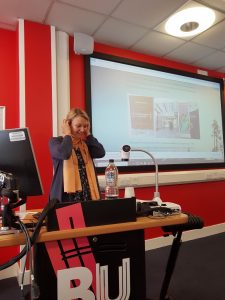 Stephanie opened the conference by encouraging contributors and audience members to reflect upon the transferability of interpreting phenomena we often consider in their specific contexts alone and the limitations arising from differences in our epistemological framings of analyses, contingent on such context and distinctions such as ‘the Global South’. Questions of cultural translation, power, language and positioning can be perceived or experienced as barriers to engagement, rather than opportunities to share best practice. The aims of the conference were to critically re-envisage our contemporary conceptualisations of such concepts on the basis of comparison and shared reflection.

Jade Levell was our first speaker, with a paper entitled:  “The competing masculinities of gang-involved men who experienced domestic violence/abuse in childhood”. Jade’s presentation, drawn from her PhD thesis, considers the conflicted and competing gender performances by marginalised men who have been drawn into gangs in the UK. She demonstrated how these men are performing hegemonic masculinity in an attempt to claim power where they have none. This is conveyed through a language and symbolic rhetoric of war and honour. 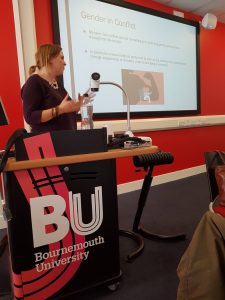 Nita Luci then spoke about “Researching Gender in the Balkans” as she traced the recent history of gender studies research in Kosovo. Her presentation began during a period where few academics were interested in looking at gendered experiences in the region to the emergence of the Programme for Gender Studies and Research in contemporary Kosovo. Through this timeframe, she highlighted the simultaneous re-framing and changing conceptualisations of masculinities in Kosovo. Linda Gusia’s paper took this conceptualisation further. In “Recognition of Sexual Violence in Kosovo after the War” Linda highlighted the conflict between the hyper visibility of war-time sexual violence and a complete silencing of questions of gender and nationalism before the war. She considered how sexual violence against women was propagated by men, as an attack on the nation’s male gaze. Through a nationalist lens the concept of heroism was the prevailing public image and discourse. There was limited space for women’s own conceptualisation of the war as their stories were reframed through a narrative of sacrifice, martyrdom and atonement. 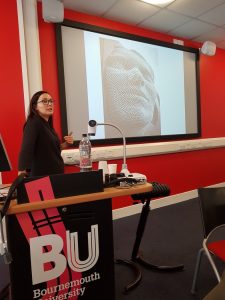 In her paper entitled “Exploring Child Vulnerabilities: pre- and post-disaster in Nepal”, Shovita Dhakal Adhikari demonstrated similar patterns of silencing of women’s and girl’s experiences of human trafficking in Nepal. Shovita critiqued the application of Westernised concepts and labels to Nepalese society, particularly in regard to discourses of vulnerable victims in need of ‘rescue and protect’. Here again, women’s bodies are being controlled as a method of protection. Lastly, Stephanie chaired a panel discussion of all of the speakers, entitled “Inverting the gaze: Juxtaposing gender and conflict in transitional societies abroad and the UK”. This produced a lively debate around concepts of competing masculinities, vulnerabilities and visibilities of marginalised voices that could be drawn from all case studies presented. The conference drew to a close with contributors and audience members agreeing that this was an energising and engaging series of papers that showcased similarities in constructions of gender and gendered violence, both in the UK and abroad. 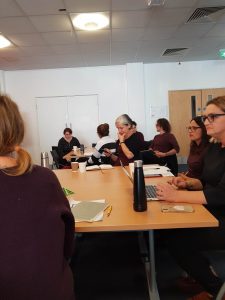 Two further speakers who were unable to attend this conference at short notice were re-scheduled to visit BU this academic year: