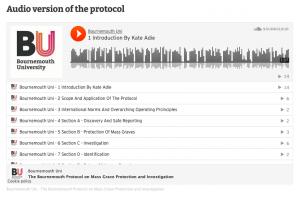 Kate Adie, broadcaster, author and the University’s fifth Chancellor is familiar with sites of conflict and destruction. In her introduction to the Bournemouth Protocol on Mass Grave Protection and Investigation she reflects on her experience:

“Mass graves are not lone incidents in human history; they exist across the globe and as a journalist I have witnessed and reported on them. But despite their diverse nature, mass graves are likely to have something in common: a family anxious to know what happened, next of kin needing to offer a dignified burial to their loved one, survivors longing to mourn the dead and a community wishing to pay respect.”

The Chancellor recognises the importance of meeting those needs and with it the aim of the Bournemouth Protocol.

“Mass graves from their discovery through to commemoration efforts deserve protection and investigation. Such efforts involve extensive engagement: From the legal, investigative and scientific disciplines to community liaison and family support, each with their own rules and standards of professional practice, they all have to come together for respectful, indiscriminate and dignified handling of mass graves and human remains.”

Bournemouth University has been instrumental in collaborative research to shape mass grave investigative practice and has been training the next generation of Forensic Archaeologists and Anthropologists, through simulation exercises at Trigon Estate, Wareham for many years. The Bournemouth Protocol, led by Dr Melanie Klinkner, are another important milestone through providing clarity on international norms and standards.

It is a great honour and privilege to have Kate Adie voice the introduction of the audio version of the Bournemouth Protocol. Special thanks go to Alastair Danson, radio and screen actor, for voicing the remainig text of the Protocol; Alex Wegman, demonstrator in film and television at Bournemouth University for his expert recording; and Rudy Noriega, freelance radio producer and Lecturer in Journalism at Bournemouth University for producing the audio version of the Bournemouth Protocol. The Audio and Protocol can be found here.