How and when humans first colonised North America is a question that has long puzzled researchers. A groundbreaking new study by BU academics has shed new light on patterns of migration and reveals that humans may have reached the Americas 7,000 years earlier than previously thought.

The study, written by Professor Matthew Bennett and Dr Sally Reynolds and published in Science today, reveals that human footprints discovered in New Mexico date from 23,000 and 21,000 years old. The discovery has the potential to radically change our understanding of when the continent was settled and suggests that there is much still to be discovered about migrations and earlier populations in this part of the world. 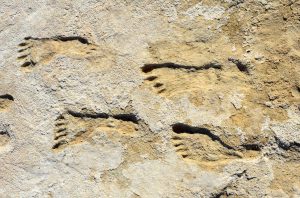 The footprints were left in soft mud on the shores of what was once a shallow lake which now forms part of Alkali Flat – a large playa (a dried desert lake) at White Sands, New Mexico with the tracks seeming to be left mainly by teenagers and younger children. Seeds found in layers of sediment above and below the footprints were radiocarbon dated by the US Geological Survey, providing the research team with very precise dates for the footprints themselves.

Professor Bennett said: “The footprints left at White Sands give a picture of what was taking place, teenagers interacting with younger children and adults. We can think of our ancestors as quite functional, hunting and surviving, but what we see here is also activity of play, and of different ages coming together.  A true insight into these early people.”

The pioneering research has been featured heavily in the media this morning with front page links on BBC News, The Times, The Guardian and many other media channels.

Science is viewed as one of the most prestigious academic journals with competition to be published so intense that less than 7% of submissions are accepted. Professor Bennett and Dr Reynold’s groundbreaking article highlights their decades of hard work and expertise in paleontology, human evolution and environmental & geographical sciences.