The end of our study leave in Malaysia is beginning to come into view and if anything the pace of work seems to be accelerating as time evaporates. During our remarkable time in Southeast Asia we have been asked to give numerous research seminars, deliver many guest lectures and been warmly invited to attend and contribute to Higher Education planning meetings. One research project done and dusted, we have moved seamlessly on to the next, in-between time spent trying to keep up with an invisibly multiplying list of writing commitments, while steaming none so genteelly under the busy, overhead fans.

Today we took a break from it all. Instead we went on visits to local social welfare agencies in Penang, to see for ourselves some of the NGOs where our BU social work students were placed, and where they are still fondly remembered.

Under the wing of Ai-Na Khor, the brisk and friendly CEO of Asia Community Service, we were first taken to see the Children’s Early Intervention Centre, where Jenna and Chloe, our Level I students had been placed under the British Council PMI 2 mobility grant we secured from 2009-12 to study student learning processes in unfamiliar international placement contexts.  We admired the dedication of this innovative, small NGO, which is entirely non-government funded, but which provides services for children from infancy to school-age years in a small ‘heritage’ house, donated rent free by a local philanthropist.

From there Ai-Na took us by 4-wheel drive high up into the verdant Penang hills to see a remarkable supported employment centre for adults with learning disabilities established in an unremarkable kampung (village).  Here the ‘members’ of the Stepping Stones Work Centre work effectively as a co-operative with the same NGO and have developed a flourishing and diverse cottage industry of hand-made goods collected from local recycled materials. The atmosphere of the Centre was bright and lively, and the members confident, friendly and eloquent, even when speech was a challenge in any language.

Here we saw a small paper-making industry, where recycled paper was reformed, strengthened with banana fibres produced through laborious grinding with pestle and mortars. The finished colourful, textured product of chalk pink, orange, yellow, lime and leaf green paper would be used for robust items like book bindings.

Here they also produce hand-loom weaving, the cotton spun and dyed on the premises.  A strangely metallic, highly robust weaving was examined with raised eyebrows. Guess what it is made of? We were asked. Recycled cassette tape of which the members had collected boxes of discarded tapes over time.

More textiles, this time traditional batik cloth using the tricky, not to mention risky, hot wax method. The designs, stamped or the more unique, free-hand style, were vibrant and impressionistic.  Delighted by them we bought many examples to use as…umm! Well something! Who could resist them after all?

In the spotless kitchens run by the members bread was being baked and packaged to sell to the local ‘coffee-shops’ in Penang. It smelled good.  A hand-made bar of mint soap made apparently of recycled, halal cooking oil and a beautiful little pottery, leaf-shaped dish completed our shopping. Everything was cheerfully packed up in dainty origami bags with handles, made entirely of cleverly folded newspaper and magazines. We treasured our purchases and marvelled at how little they cost and the incredible skill that went into every stage of the production by people otherwise written off by society in most countries.

This trip meant so much to us. Sara reminisced about her practitioner days employed as a social worker with people learning disabilities. Jonathan, also, rehearsed his experiences in a similar role, resurrecting images of proud attendees at an Adult Training Centre in the UK closed long ago as attendees were ‘mainstreamed’ whether they liked it or not, but whose identity-affirming work at that centre had made their lives meaningful.  Where are those disadvantaged people today? It is unlikely that many have independent and creative jobs to go to, unlike these active, Penang citizens, who are, regardless of disabilities, able to make and spend a hard-earned and proudly won wage.

Seeing work like this reminded us both of why we went into social work in the first place. It also made us question once again where so much has gone wrong. Perhaps in the UK our homage to politically correct approaches has failed to take into account the nuanced twists and turns by which people of diverse abilities live their lives and display their humanity. 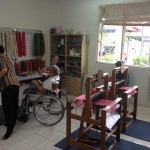 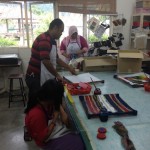