Jet lagged and dazed Professor Bennett is just back from another session of fieldwork in New Mexico at the newly created White Sands National Park.  Previously a National Monument it was transformed into a Park by President Trump in December 2019 becoming the 62nd National Park in the USA.  Not only does the name change involve an exchange of various land parcels with its military neighbours (White Sands Missile Range), but it also adds the words palaeontology and archaeology into the founding legislation and mission.  This is in part a result of the research that we have been doing at White Sands since 2017.  This was my tenth trip since January 2017 which is a huge investment of time, with more to come in the future.  We have shown that fossil human footprints from the Late Pleistocene exist just below the surface at White Sands, how these humans may have hunted giant ground sloth, as well as pioneered the application of ground penetrating radar to the prospection of Ice Age footprints.  We are currently examining a potential mammoth kill site, the early use of transport-technology and also resolving some outstanding issues with respect to dating these tracks work we are doing in conjunction with the USGS.  Watch out for exciting updates in 2020.

The change in designation Monument to Park has huge implications for visitor numbers, federal resources and the local economy which will benefit annually by over $6 million dollars.  Last year our work was captured in a French/Ger 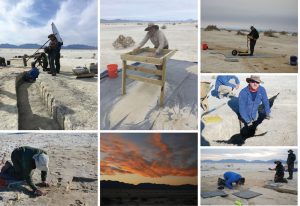 man documentary made by ARTE as part of the Terra X series.  Interest in the site remains high and this season we had a TV crew from PBS America and Nova with us in the field.  They are following our research team throughout the next nine months and will be filming here in Bournemouth at some point in the near future.  The Director of the Smithsonian Dr Kirk Johnson is leading this programme and is now a fan of the site.  The technological aspects of our work at White Sands are also due to feature on Ancient Mysteries Decoded available via the Discovery Science channel later this year.

You may also have read about White Sands just before Christmas since it is the landing site for the new NASA Starliner.  The missile range is also home to the Trinity Nuclear Test site. A few pictures ‘of my other office’ give you a flavour of the environment in which we are working.