Dr Jaeyeon Choe – Business School – has published an edited book, entitled “Pilgrimage beyond the Officially Sacred: Understanding the Geographies of Religion and Spirituality in Sacred Travel” with Dr Michael Di Giovine from the Department of Anthropology and Sociology at West Chester University of Pennsylvania, USA. 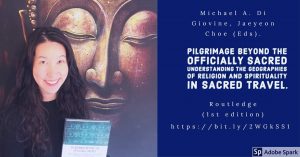 Pilgrimage beyond the Officially Sacred: Understanding the Geographies of Religion and Spirituality in Sacred Travel examines the many ways in which pilgrimage engages with sacredness, delving beyond the officially recognized, and often religiously conceived, pilgrimage sites.

As scholarship examining the lived experiences of pilgrims and tourists has demonstrated, pilgrimage need not be religious in nature, nor be officially sanctioned; rather, they can be ‘hyper-meaningful’ voyages, set apart from the everyday profane life—in a word, they are sacred. Separating the social category of ‘religion’ from the ‘sacred,’ this volume brings together a multidisciplinary group of scholars employing perspectives from anthropology, geography, sociology, religious studies, theology, and interdisciplinary tourism studies to theorize sacredness, its variability, and the ways in which it is officially recognized or condemned by power brokers. Rich in case studies from sacred centers throughout the world, the contributions pay close attention to the ways in which pilgrims, central authorities, site managers, locals, and other stakeholders on the ground appropriate, negotiate, shape, contest, or circumvent the powerful forces of the sacred. Delving ‘beyond the officially sacred,’ this collective examination of pilgrimages—both well-established and new, religious and secular, authorized and not—presents a compelling look at the interplay of secular powers and the transcendent forces of the sacred at these hyper-meaningful sites.

Providing a blueprint for how work in the anthropology and geography of religion, and the fields of pilgrimage and religious tourism, may move forward, Pilgrimage beyond the Officially Sacred will be of great interest to an interdisciplinary field of scholars. The chapters were originally published as a special issue in Tourism Geographies.

Geographies of religion and spirituality: pilgrimage beyond the ‘officially’ sacred

1. From the liminal to the lateral: urban religion in English cathedrals

2. Meaning-making in the course of action: affordance theory at the pilgrim/tourist nexus

7. Reframing and Reconceptualising Gambling tourism in Macau as a Chinese Pilgrimage

More more information and how to order: