Dr Jaeyeon Choe in Business School has published an article entitled, “Faith Manifest: Spiritual and Mindfulness Tourism in Chiang Mai, Thailand”, co-authored with Dr Michael O’ Regan. They were invited to write this article for a Special Issue “Faith in Spiritual and Heritage Tourism” in Religions (Edited by Dr Michael Di Giovine and Dr Mohamad Sharifi-Tehran). 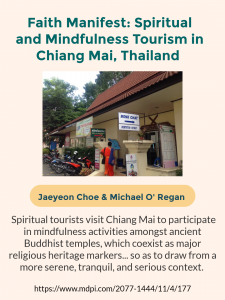 From books to movies, the media is now flush with spiritual and wellness tourist-related images, films, and fiction (which are primarily produced in the West) about Southeast Asia. Combined with the positive effects of spiritual practices, greater numbers of tourists are travelling to Southeast Asia for mindfulness, yoga, and other spiritual pursuits. Influenced by popular mass media coverage, such as Hollywood movies and literary bestsellers like Eat Pray Love (2006) and tourism imaginaries about particular peoples and places, spiritual tourists are visiting Southeast Asia in increasing numbers. They travel to learn about and practice mindfulness, so as to recharge their batteries, achieve spiritual fulfillment, enhance their spiritual well-being, and find a true self. However, there is a notable lack of scholarly work around the nature and outcomes of spiritual tourism in the region. Owing to its Buddhist temples, cultural heritage, religious history, infrastructure, and perceived safety, Chiang Mai in Thailand, in particular, has become a major spiritual tourism destination. Based on participant observation including informal conversations, and 10 semi-structured interviews in Chiang Mai during two summers in 2016 and 2018, our research explored why Western tourists travel to Chiang Mai to engage in mindfulness practices regardless of their religious affiliation. We explored their faith in their spiritual practice in Chiang Mai. Rather than the faith implied in religion, this faith refers to trust or confidence in something. Interestingly, none of the informants identified themselves as Buddhist even though many had practiced Buddhist mindfulness for years. They had faith that mindfulness would resolve problems, such as depression and anxiety, following life events such as divorces, deaths in family, drug abuse, or at least help free them from worries. They noted that mindfulness practices were a constructive means of dealing with negative life events. This study found that the informants sought to embed mindfulness and other spiritual practices into the fabric of their everyday life. Their faith in mindfulness led them to a destination where Buddhist heritage, history, and culture are concentrated but also consumed. Whilst discussing the preliminary findings through a critical lens, the research recommends future research pathways.