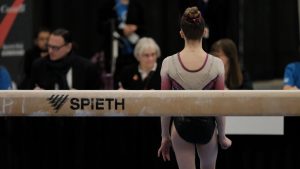 Over the last few months, numerous stories have emerged from the world of gymnastics which have exposed the darker side of the sport.  Sexual abuse, bullying, harassment, fear and body-shaming are just some of the conditions that gymnasts from around the world have spoken out about.

BU’s Dr Carly Stewart, together with 22 other scholars from a number of countries, have published a manifesto proposing eight actions to be taken.  The manifesto is about changing the culture of women’s artistic gymnastics and seeking to address deep seated power that operates against athletes, often transferred from the coaches and other officials. By doing so, they hope to disrupt and prevent physical, psychological and emotional abuse.

The group of scholars are known as the International Socio-Cultural research group on Women’s Artistic Gymnastics (ICSWAG), which was established in 2016 following an international conference held at the University of Gothenburg.  Research from network members highlights problematic coaching behaviours and practices and the need for change.  Many of the network’s members are former gymnasts and several have coached, judged, and been officials with gymnastics organisations.  The ISCWAG body of research is extensive and has recently culminated in the book ‘Women’s Artistic Gymnastics: Socio-Cultural Perspectives’.

The need for change has been clearly demonstrated over the summer following the launch of the documentary Athlete A on Netflix about systematic abuse and a culture of silence within gymnastics in the USA. National team physician Larry Nassar was one of the perpetrators, sentenced to several hundred years in prison for abusing hundreds of women gymnasts.

“Athlete A” caused women gymnasts from other countries to come forward during the summer, speaking out about similar abuse and is gaining momentum.

Since this summer, this group of gymnastics scholars been interviewed in the international media, including Australia, Switzerland, the Netherlands and Sweden and are in discussion with national gymnastics federations and other organisations to discuss how change can be made possible.