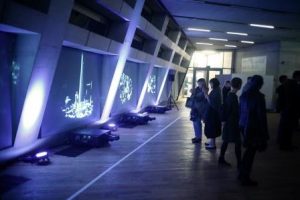 Background: BU’s Gingrich and Renaud are practice-based researchers and members of the Analema Group, an arts collective which creates participatory experiences that explore the relationships between sound, colour, light, movement and form. They created three multi-sensory experiences which focused on audience participation through KIMA, an art and research project investigating the visual properties of sound. KIMA: Voice represents participants’ vocal harmonies in 3D form. BU worked with researchers from the Centre for Performance Science – a partnership between the Royal College of Music and Imperial College London – to explore how such harmonies can measure social connectedness, happiness and loneliness. KIMA: Noise is an interactive sound art piece, developed with an urban noise and health expert from Queen Mary University London, which examines the negative effect of urban noise on social behaviour, health and wellbeing. KIMA: Colour, created with scientists and curators from the National Gallery and data and algorithm experts from King’s College, allowed audiences to experience a deeper understanding of the art and science of colour in its paintings by transforming the colour data into light and sound installations.

The impact: Engagement with the KIMA installations improved wellbeing by increasing feelings of social connectedness, particularly during the first Covid-19 lockdown. The projects raised awareness among clinicians and decision makers of the benefits of participatory art. KIMA: Colour, in particular, provided evidence of the way in which digital platforms can enable art collections and museums to stay relevant in the 21st century. The work also increased the public discourse on the relationship between art and health, including the detrimental effects of urban noise on wellbeing in KIMA: Noise.

Background: The hump-backed, orange-finned mahseer is one of the world’s largest freshwater fish and unique to the Cauvery River basin in southern India. Of high global angling significance due to its size (>50kg), its spawning migrations have been threatened by dam building since the early 1900s, leading to decreasing fish numbers. This has since been compounded by unsustainable harvesting, which created local food security problems as the fish was an important protein source.  In 2010 Pinder was fishing in the Western Ghats of southern India, where the Cauvery river originates, and realised that the number and types of mahseer fish being captured did not reflect historical angling records for the region. Together with Britton, he initiated a mahseer research programme, which led to the identification and conservation of a fish now known to be at imminent risk from extinction.

The impact: BU’s research clarified the taxonomy of the orange-finned mahseer as Tor remedavii, which was vital in getting it classified as ‘Critically Endangered’ on the International Union for Conservation of Nature’s (IUCN) Red List of Threatened Species. As IUCN noted: “Without… [BU’s] research, there is a very real possibility that this megafauna could have gone extinct without ever formally being recognised as a species.” By spotlighting the orange-finned mahseer as a conservation priority, BU researchers influenced responsible stocking policies across the mahseer genus, throughout India and southern Asia. Indian-based multinational utility company Tata Power amended its Mahseer Conservation Programme and specific guidance on protecting the fish was included in India’s Wildlife Action Plan. The research insights contributed to new conservation, outreach and education awareness programmes for local schoolchildren and anglers. Working with Tata, India’s Ministry of Environment, Forest and Climate Change and the World Wide Fund for Nature India, the researchers helped develop a robust monitoring programme, which was initially due to be implemented last year, but is currently on hold due to Covid-19.

Next post: preserving heritage military vehicles & support for those with face blindness.