Professor Adrian Newton shares his experience of presenting at a BU Café Scientifique event on 4 May 2021.

This talk for Cafe Scientifique was designed to launch a new book that I’ve just written, called ‘Ecosystem collapse and recovery’. This is the first scientific monograph that explores these phenomena, and has just been published by Cambridge University Press. Ecosystem collapse has been in the news a lot recently, with major environmental catastrophes including the bleaching event in the Great Barrier Reef in Australia, and unprecedented fires in Australia, California, Indonesia and the Amazon. Indeed, as I was writing the book, new examples of major changes in the world’s ecosystems seemed to be happening every week. 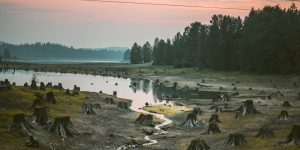 Although ecosystem collapse could clearly have major implications for human society, it has only recently become the focus of scientific attention. I became interested in the topic through my research on ecosystems near to Bournemouth, specifically the New Forest National Park and the county of Dorset. In the New Forest, we found that the ancient beech woodlands are collapsing throughout the Park, which is having a devastating effect on the wildlife associated with them. The main cause appears to be climate change, although high herbivore pressure is adding to the problem. In Dorset, we found that a number of ecosystems have been dramatically transformed over the past 80 years or so. Back in the 1930s, there were extensive areas of species-rich chalk grassland, for example, which has now largely disappeared, owing to the spread of arable agriculture. So the problem of rapid environmental change is happening everywhere, including on our own doorstep here in Dorset.

For the talk, I decided to focus on some of the most interesting stories I came across while writing the book. I learned a great deal from the writing process; I really enjoyed digging into the literature on topics I knew little about. For example, what happened to the world’s ecosystems after the asteroid strike at the end of the Cretaceous – how long did it take them to recover? And how did extinction of megafauna at the end of the last Ice Age affect the world’s ecosystems? I also came across some epic human stories, such as the colonisation of Australia by boat perhaps as long as 60,000 years ago, and the colonisation of Madagascar by a boatload of fisherfolk from what is now Indonesia, around 3000 years ago. Perhaps the most startling is the idea that the Sahara desert might largely have been created by people, after they introduced livestock to the area around 7,000 years ago, when it was still a grassland landscape with lakes and rivers.

I thought the talk went really well, and I have since received a lot of positive feedback about it. I always find it challenging to answer questions from the public, as you have to think on your feet, but I really enjoyed the discussion after the talk – the audience asked some great questions. It certainly felt a bit strange giving my talk on-line, just speaking to my laptop rather than to an audience in a room, but I really liked the way that people from all over the world were able to attend, including some old friends. Some of the comments I received were along the lines of “I never knew that anything like this was happening”, so if my talk has helped raise awareness of how rapidly the world’s ecosystems are changing right now, it will have done its job. 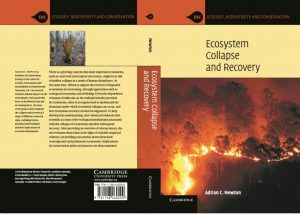