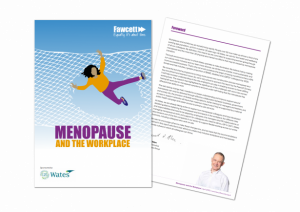 As the current UCU Equality Officer, I’d like to share some recent research (2022) on menopause and the workplace, which is presented by the Fawcett Society*. The research (see: https://www.fawcettsociety.org.uk/Handlers/Download.ashx?IDMF=9672cf45-5f13-4b69-8882-1e5e643ac8a6) follows on from the C4 documentary ‘Davina McCall: Sex, Mind and the Menopause’ commissioned by Finestripe Productions.

This televised popular cultural representation raised awareness of the menopause. Additionally, Finestripe commissioned Savanta ComRes to conduct a  survey of 4,014 UK women aged 45-55 who are currently or have previously experienced the perimenopause or the menopause. The Fawcett Society, who were involved in the research design, acknowledge their gratitude “to Channel 4 and to Finestripe for enabling us to use that data in this report. We are also grateful to The Wates Group (a construction company), without whose sponsorship this report could not have been produced.”

Key findings from the research are as follows:

At the end of October 2021, the UK Government issued a Press Release (see: https://www.gov.uk/government/news/more-support-for-women-experiencing-the-menopause) outlining action for a Menopause Taskforce to better support women experiencing the menopause. The Task force will be co-chaired by the Minister for Women’s Health and Carolyn Harris MP and aims to address the role of education, training and workplace policies. The Civil Service will be involved in developing workplace menopause policy to ensure women can continue to work to their full potential.

At BU, we have Menopause Guidelines (see: https://staffintranet.bournemouth.ac.uk/workingatbu/healthsafetywellbeing/hsfire/menopause/) for members of staff and managers, which states that: “Research shows that the majority of women are unwilling to discuss menopause-related health problems with their line manager, nor ask for the support or adjustments that they may need”

One of the aims of the BU guidelines is to: “Foster an environment in which colleagues can openly and comfortably instigate conversations, or engage in discussions about menopause“.

Hopefully, existing menopause and workplace research findings, accompanied by policy reform, will impact change in the workplace and make menopause easier to talk about and support.

The TUC also have an informative and useful menopause toolkit: https://www.tuc.org.uk/sites/default/files/Menopause%20toolkit%20Eng%20FINAL.pdf

*The Fawcett Society is a UK charity, established in 1866; campaigns for women’s rights