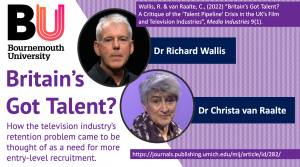 There’s currently a talent crisis in the television industry. As I’ve previously described in this blog, media careers have a ‘shelf-life’ with more experienced talent tending to move on and up elsewhere. This has long been the case, but what’s new is that since 2015 there has been a massive increase in demand for content. It’s sometimes called ‘the Netflix effect’.  Suddenly the shortage of experienced skilled workers has been exposed as never before.

In the research we publish this week, Christa van Raalte and I have examined in depth the way in which a problem of attrition within the television industry came to be framed as a problem of recruitment. We explore how and why this came about, despite the implausibility of the idea that getting more young people to come and work in the film and television industries (however vast their numbers) could compensate for the attrition of experienced workers – an idea that has taken root and informed industry policy. Our aim is to help refocus the discussion on the reasons why people are leaving the industry, and the practical measures that need to be taken to nurture careers beyond entry-level.  We also highlight the dangers inherent in policy research where there is a gravitational pull for evidence-based policy to be overridden by policy-based evidence.

Richard Wallis and Christa van Raalte, C., 2022. Britain’s Got Talent? A Critique of the “Talent Pipeline” Crisis in the UK’s Film and Television Industries. Media Industries, 9(1).

Video abstract: Britain’s Got Talent? A Critique of the “Talent Pipeline” Crisis in the UK’s Film and Television Industries.