Research collaboration between Bournemouth University and Hydreco Hydraulics Ltd, our local hydraulic equipment supplier company based in Poole, has resulted in the design and development of a potential next generation hydraulic valve and control systems.  This would be used in a wide range of applications including targeting the Earth’s movement and constructing different types of heavy machinery. 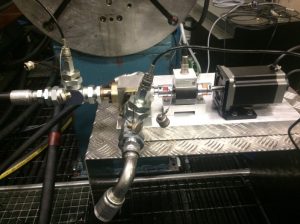 Hydreco Hydraulics is sponsoring and supporting two PhD projects from BU’s Department of Design and Engineering, in the Faculty of Science and Technology. One project involves the design and provision of the mechanical parts, while the other project involves the provision of the control systems.  The company has just started testing the first prototype valve and its control system algorithm.  The aims of the planned tests are to study the performance of the valve, compare it to the simulation predictions, and to identify its mechanical characteristics needed to fine tune the control algorithms.

The important concept used in the new hydraulic valve is the relatively novel idea of electronically controlled independent metering.  However, BU researchers are developing a more advanced version that promises to be more controllable and has much higher resolution using improved independent micro-metering control algorithm.

The first prototype of this next generation hydraulic valves, that was investigated and developed by engineering research scientists and research students at BU in collaboration with engineers from the our industrial partner and collaborators, is currently being tested on site at Hydreco hydraulics PLC.  Key mechanical characteristics such as damping, friction, leakages, and metering control can now be investigated, quantified or improved towards developing the final commercial product.  This investigation can lead to further development of the controller algorithm as well as performing the necessary design modification needed to create valve clusters and a more detailed design needed to better condition the flow prior to entering in to metering zone.  The gap between simulation and experimental performance of the pump can be better understood and factored in to the controller algorithm design in order to improve the efficiency and resolution of positional control of the valve spool.  This valve clustering and control system is now the subject of an on-going investigation.  The valve’s mechanical characteristics used in simulation are being analysed and updated as a result of these tests.

A typical hydraulic actuator, whether linear (hydraulic cylinder) or rotary (hydraulic motor), used in the target market machines/product(e.g. excavators or loaders) requires four of these valve elements per actuators when adopting our independent metering control strategy.  This, as stated above, requires a new design in order to cluster four valves into one mechanical unit per actuator.  As a result Mr Philip Godfrey, from Hydreco Hyradualics Ltd., and Professor Siamak Noroozi, from Bournemouth University, have created two final year undergraduate projects where two existing Mechanical Engineering students will be working on this new design as their final year project.  These students will perform a full hydraulic flow simulation, a full structural integrity analysis under hydro static load  in order to check the Hydro-Elastic characteristics and the feasibility of the clustering idea. 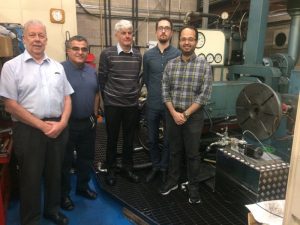 Mr Philip Godfrey and Professor Siamak Noroozi are currently investigating possible routes to the market for this new design.  It is a perfect example of Fusion in action where the link between Research, Education and Professional Practice is much greater than that on paper.  This project will not only change a company’s market position but also improve the economy and quality of life by reducing the energy consumption rates of these machines.