Sam Gyimah, the self-styled “Minister for Students” has been campaigning this week on student mental health.

You can read the government press release here.  “The plans include, As part of a new package of measures announced by Sam Gyimah on student mental health:

The Charter is being developed by Student Minds, who have covered it on their website here:

The Minister was on Radio 4 and the BBC story is here.  The story from Thursday is in The Guardian:

The BBC have the link to this week’s Office for National Statistics report – interestingly this showed that the proportion of student suicides is lower than in the general population for the same age group – but of course suicides are, as the Minister says, only part of the problem:

And on Friday, Nicola Barden from the University of Winchester has written for Wonkhe on the role of parents in supporting students:

Race equality has also been in the HE headlines.  There was an article in the THE about the “onerous” red tape requirements of the Race Equality Charter.

Wonkhe have had a series of articles this week on the issue.

Jess Moody of Advance HE writes about definitions and ownership:

Amatey Doku, the VP (HE) of the NUS, writes on the Black attainment gap:

And she looks at data before concluding:

David Morris of the University of Greenwich writes about admissions:

The discussion, anecdotes and arguments about free speech at universities continue – there is no real agreement about whether there is an issue or not.  What seems clear is that even if there is no actual free speech problem on university campuses, enough people think there is, and there is enough confusion, it seems, about what the rules are and whose responsibility it is to (a)} ensure free speech and (b) stop illegal hate speech or radicalisation to mean that something needs to be done.  Student Unions think they need safe space policies to stop hate speech (or protect snowflakes from potentially offensive views, depending on your perspective).  Universities have to implement Prevent.  Many commentators forget that universities don’t control Students’ Unions.  And the Minister and others keep talking about being “nearly” censored, about self-censorship (I decided not to go because they wanted to see my speech in advance) etc. etc.

And then we have a survey by YouGov.

However, the reporting of this story seems to demonstrate our opening point – that this debate all depends on your perspective.  The Telegraph use the same data to say:

Conclusion: at least we are all free to say what we believe about all of this.  More serious conclusion: the debate seems really to be really about this (from the Telegraph article):

So is this really about the perception that universities are monocultures (left-wing, remain voting ones)?  And therefore not really about safe spaces or free speech at all?.  It might be argued that this is more about the government shaking up an academic establishment which it believes is home to a lot of people who disagree with its views, and who have a dangerously high level of influence on impressionable students.  That may be true, of course.

And what will be impact of all this be?  There may be some clearer guidance.  But generally, those who believe in snowflakes will become further entrenched in their views as this goes on, and the reputation of the sector will continue to be diminished in the minds of those people and also others who only catch the headlines.

And it all sits very oddly besides the focus on mental health – which is one of the reasons behind safe spaces.  Politics can get a person into some very sticky paradoxical situations, it seems.

The Quality Assurance Agency has published a report on whether social media reviews can identify poor courses in higher education.

Wonkhe also have an article on this topic by Alex Griffiths

This comes as The Minister promotes his app development competition

Wonkhe have an article by Sue Attewell from JISC:

Since the publication of the Sector Deal in December, the Government has:

The government have issued their response to the Industrial Strategy: Intellectual Property Call for Views: Proposals:

I joined BU as a lecturer in the Faculty of Media and Communication on 1 September 2014, three months after being awarded my PhD in Media and Cultural Studies from the University of Salford.

So, as the anniversary of my appointment approaches, I consider it timely to reflect on my first year as a full-time academic. I hope that my experience will be of interest to others starting new academic roles this year, at a similar stage in their careers.

To put my experience in context, while technically an early career researcher, I’m no spring chicken! I was a very mature PhD student (even though no-one ever guesses my real age) and joined BU with baggage in tow!

The eclectic baggage I brought with me was six years’ experience as a lecturer in higher education on a part-time basis combined with a variety of other roles including journalist, research assistant, blogger, PhD student, social entrepreneur and Chief Executive of Black British Academics.

I arrived at BU with drive, motivation and ambition intact, after four years of intense doctoral study, with my carefully prepared 5-year research plan, diligently completed after receiving my PhD award, which accompanied me to my interview at BU in June 2014.

By my own observations, the first five years post PhD is make-or-break time. With aspirations to become a professor one day, performing the yearly regime of international conferences, journal articles, books, book chapters and funding bids are necessary tasks.

My primary area of research in media and communication is centred on racial constructions and representations in media and popular culture and how race shapes and influences engagement with and use of digital technologies.  My PhD thesis is a study on the social, cultural and counterhegemonic practices of Black British bloggers. 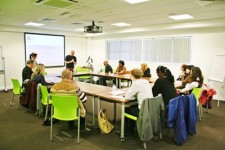 A the Media and Politics Group conference

Year 1 of my 5-year research plan included developing publications from my PhD thesis. In November 2013 I had presented a paper from the chapter: Alternative Voices, Alternative Spaces, Counterhegemonic Discourse in the Blogosphere at BU for the Media and Politics Group annual conference. It won the James Thomas Memorial Prize, and is the first chapter in a new book being published with Palgrave Macmillan in September, edited by four faculty colleagues, called Media, Margins and Civic Agency.

I presented another chapter of my thesis at the Cyberspace conference in the Czech Republic in November 2014, which I recently submitted for review at Information, Communication and Society: Blogging While Black, British and Female: A Critical Study on Discursive Activism.

A third chapter: Challenging the Whiteness of Britishness: Co-Creating British Social History in the Blogosphere, was presented at the ICCMTD conference in Dubai in May, and has been accepted for publication in the Online Journal of Media and Communication Technologies for a special issue in September.

My PhD thesis now exhausted publication-wise, I am currently focusing on three strands of research: race and ethnicity in media and communication, pedagogies of social justice and cultural democracy and race equality and cultural democracy. These research interests are broadly linked to three key dimensions of my role as an academic: 1) research (extending knowledge within my discipline) 2) education (teaching), and 3)professional practice.

Cultural democracy, a recurring theme in my research, is a conceptual framework developed in the US more than a decade ago, surprisingly unfamiliar and underexplored on this side of the Atlantic. However, I plan to change that by advancing understanding through research based on its application in practice. After setting up the Cultural Democracy Network in May, shortly after being awarded a small grant from the Grants Academy to develop partnerships with UK-based institutions, I was invited to deliver a guest lecture on cultural democracy to 14 journalists at Research Fortnight’s London offices. 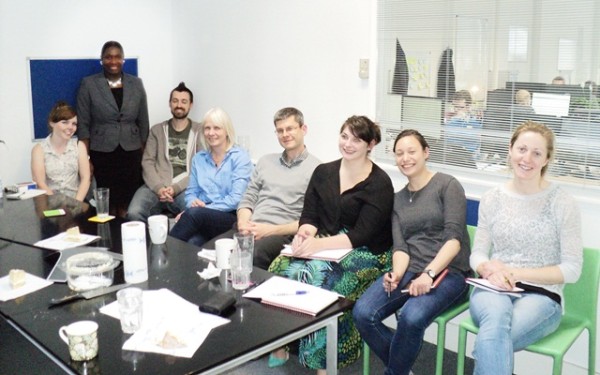 Two of my current research projects represent research papers based on consultancy projects completed this past year. The first is a journal article I am co-authoring with Prof Kevin Hylton called Culturally Democratic Voices: Enhancing Race Equality Through Minority Staff Experiences, which we plan to submit to Race, Ethnicity and Education.

The second is a co-authored paper with Aisha Richards called Social Justice Pedagogy and Cultural Democracy: Promoting Inclusion and Equality in Further and Higher Education. It has just been accepted for presentation at the IAFOR International Conference on Education taking place in Hawaii in January, and we hope it will be selected for publication in the Journal of Education.

I have a book chapter coming out in September being published by Verlag Springer called Race, Racism and Resistance In British Academia, which I presented at the Surviving in a White Institution symposium at Leeds University in May, organised by the Critical Race and Ethnicities Network.

Finally, I am co-editor of a book project with Dr Shirley Tate, an Associate Professor in sociology at Leeds University, which is a collection of autoethnographies called Hear Us: Women Academics of Colour: Surviving and Thriving in British Academia, which we plan to publish next Autumn. It is a project I developed for the Black Sister Network at Black British Academics.

It has been a busy and productive year as an early career researcher, and in terms of my plans for the year ahead, this will be focused on the completion of work in progress, developing a funding bid and turning my attention to new areas of research.

One of these areas is advertising, which will inform my teaching on the BA Advertising degree. I plan to examine issues around constructions and representations of race and gender in TV advertising, examining audience perceptions. The other new area of research which builds on my doctoral study is engagement with digital technologies among Black elders.

In terms of the 5-year research plan I started out with, I discarded it within the first three months! I prefer to work with a yearly plan as I have found that in practice, the research culture and environment is too fluid, dynamic and constantly changing to plan specific publications so far in advance.

However, it is still a useful exercise post PhD to prompt thinking about the areas of research to focus on and the types of research projects to undertake. I have a target for publications and funding bids I aim to complete by 2019 – just before REF2020, so forward planning helps to ensure I stay on track!