HSC was well represented at the BU 6th Annual Postgraduate Conference 2014 with talks under the themes Lifelong Health and Wellbeing and Ageing, Society and Dementia by:

Ashley Mitchell: “Can we fix it?!: Understanding the impact of children’s hospices on parental relationships of life-limited and life-threatened children and young people”.

Also winning a prize for her photo, Sheetal poster, photo and oral presentations on “Pregnant and dirty: A qualitative study of childbirth practice, beliefs and myths in Nepal”. The paper is currently under review by eBU. eBU editor Andrew Harding, PGR, HSC was present and encouraged conference attendees to submit to eBU, as their abstracts will be published in eBU.

Also present was first year Clare Farrance part of the organising committee with Ashley and a chair. And a theme Leader: Professor Edwin van Teijlingen, Professor of Reproductive Health Research who spoke of student engagement with their profile pages, blogging and publishing endeavours.

Highlights included a keynote presentation by Professor Kevin Warwick, Professor of Cybernetics, from the University of Reading who twice has had implants which permitted manipulation as part of robot learning and appears in the 2013 edition of the Guinness World Records Book for the first direct electronic communication between two nervous systems with his wife Irena. His work centers on artificial intelligence, biomedical engineering and control systems.

Definitely a conference with something for everyone and a opportunity to engage with other schools.

Other presentations from HSC included:

Jib Acharya: “The Raute: An Ethnic and Nomadic Group (the hunters and gatherers) estimated from 900 years ago and few remaining only in South Asia”

Jib Acharya: “A Comparative study on Nutritional Problems in Preschool aged children of the Kaski District of Nepal”

Thank you to Vanora Hundley and Jen Lemmon for their feedback. 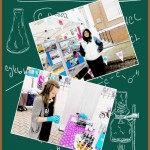 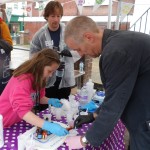 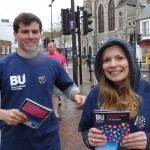 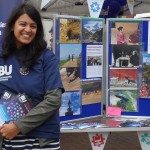 A few brave souls from HSC spent the May 18-19th weekend advertising Bournemouth University Festival of Learning Poole High Street. Bracing the sun and…Then the rain…All in the name of research and take part in the BU event and help hand out flyers and booklets. All this to engage with the public, including talking about research in Nepal, the day felt a bit like Waiting for the Monsoon in Poole! Using photos to make the passer-byes guess why a sickle is used during childbirth. The day made for a good dry run for our events that will take place during the 3-14 June 2013 BU’s Festival of Learning; with a 100 events to choose from mastering social media, see if you are a super-recogniser or join in the debate about renewable energy sources. Also some of the ‘touch’ questions on culture and health in low-income countries help with the reflective part of the thesis. Teaching, engagement and research if done hand- in-hand; help ideas get ordered and formulate answers to those questions you hadn’t previously thought about. Finally, thanks goes to RKEO, M&C and HSC’s Dr. Jen Leamon for helping me format my FoL event on Nepal!

Some of what HSC is up to in June: (c) Sheetale “Ishwori and women in a health promotion group laughing when asked if men would help in the housework; part of addressing women’s status @GTNHP”

BU Professor Edwin van Teijlingen is involved in organisation of the first National Health Promotion conference in Nepal.  The conference is held in Kathmandu over the Easter weekend (March 30th-April 1st).  This is a unique collaboration between Bournemouth University, the Government of Nepal, international organisations such as the World Health Organization, USAID, the Nepalese media, and several universities and colleges; and will highlight the importance of health promotion at all levels in Nepal.

One of the opening plenary will be given by Prof. van Teijlingen, we will outline health promotion from a global perspective. A total of 75 papers will be presented at the conference, including one by HSC BU PhD student Ms. Sheetal Sharma. She will also present findings from the long-term research project that aimed to improve the uptake of maternity services in rural Nepal.  Her PhD research is supervised by HSC’s Prof. Vanora Hundley, Dr. Catherine Angell & Prof. van Teijlingen as well as Dr. Padam Simkhada from The University of Sheffield and Visiting Faculty at HSC. As part of the conference Prof. van Teijlingen and Dr. Simkhada will also run a skills-building workshop which offers training on writing up of findings health promotion research for academic journals.

There will be 250 participants from seven different countries including the USA, Canada, UK, India, Nigeria, the Netherlands and Nepal. This is the first ever conference of its kind to held in Nepal in the field of health promotion.

Prof. van Teijlingen said: “Nepal has a double burden of diseases.  It experiences both the kind of infectious diseases associated with being a low-income country, and a growing burden of the kind of diseases commonly associated with lifestyles in high-income countries. Therefore, is it is encouraging to see that so many different organisations have signed up to the principles of health promotion.”

Ms. Sharma commented: “Nepal is an exciting country to conduct research in, with the diverse castes and motivated rural community volunteers; also among South Asian countries, its speed of development is considerable: the Maternal Mortality rate was halved despite a decade long civil war, Abortion is legal since 2002, same sex marriage since 2008. It is important to disseminate findings to relevant stakeholders.”

Dr. Simkhada and Prof. van Teijlingen are both Visiting Professor at two Nepalese universities. They have more than sixty of research articles publish in international journals on health-related issues in Nepal.  Sheetal Sharma was funded by BU to travel to Nepal and attend the conference.  Prof. van Teijlingen was interviewed for national television in Nepal regarding the Public Health conference.

The Health Promotion conference has its own web site see:  http://hpconference.org.np/

Prof. van Teijlingen has been conducting research in Nepal for nearly a decade.  Some of the work he is evaluating is supported by Green Tara UK, a Buddhist organization based in London. Roosters crowing, cows mooing, bleating goats, birds chirping, mobile phones ringing, children screaming, laughing and running around while women, breastfeeding, talk over one another excitedly in the sun as they need to leave us soon to drop the children off to school and/or head to the field to cultivate the season’s crop this spring it is wheat, last summer, rice. Women do this work as most of their husbands are away in the capital, Kathmandu or in the Arab Gulf. This is the reality of conducting focus groups in rural Nepal.

Although we, as researchers, spend considerable time to perfect the ideal ‘tool’ of the interview schedule and imagine the transcription clear and the background; a researcher must be prepared for every eventuality. Noise, din and interruptions: Today a dog nibbled on a nearby goat and a few men kept creeping to listen in why was this videshi (foreigner) recording conversations and making notes. The women shooed them away as today was a discussion on contraception; also that the discussion of the focus groups should be in ‘controlled environment’, safe, quiet; and in Nepal where women are not the main decision-maker for their reproductive health, it should mean a lieu women should be able to discuss freely these issues. In this Green Tara’s (www.greentaratrust.com) intervention area, which my PhD, supervised at HSC BU by Catherine Angell, Vanora Hundley, Edwin van Teijlingen and University of Sheffield’s Padam Simkhada, aims to evaluate both quantitatively and qualitatively, shows one the decision-making outcomes improved: increased the use of contraception in the Pharping area from 4.3% (2008) to 24.6% (2012) after 5 years of health promotion conducted by two auxiliary nurse-midwives.
40 minutes later recording (with 2 digital recorders) and once the demographic data and recording is double-checked and any last questions answered we set off walking 2 hours downhill visiting a tea-shop on the way for a cup of chai. Sheetal Sharma, HSC presented at the Science in Society conference (SiS) at Berkeley University in November 2012 where she received a Graduate Scholar Award http://science-society.com/the-conference/graduate-scholar-award

As a PhD student presenting it’s an opportunity to practice for the inevitable viva and a chance to reflect on your work, as there’s always a question you do not expect. For instance, I had a few questions on cultural aspects of my PhD mixed-methods evaluation. That helped me prepare for my transfer viva, where I was asked on the cultural context of the health promotion intervention, specifically in a country context, run by Green Tara Nepal: http://www.greentaratrust.com/ The plenary was the Presidential Commission for the Study of Bioethical Issues http://www.bioethics.gov/cms/node/778 on ethics and morality of science.

Conferences can be competitive, in the sense, you need to be accepted. Secondly you also can compete for a ‘free space’ and in this instance you were able to compete to be a chair. At SiS, graduate students were invited to, through a very formal application process, to be chair of session. Although it means you won’t attend certain talks, the trade-off is worth is as one is forced to think of questions or how to manage, and be critical and aware of several issues of research.

Being ‘forced’ to be critical led to my planning more what aspects I want to present to the audience. This conference was concerned with the science of health, its epistemology and helped me think of how to discuss the development of theory. As in a PhD viva one might need to answer ‘new knowledge to the field’ how the theory or models proposed are better than competing theories.

I was also lucky to visit Howard University, where I spend time researching cultural ‘appropriateness’ of health programmes, specifically should postnatal care be done again at 40 days. For my PhD evaluation of the Green Tara Nepal that the cultural sensitive aspect led to its increase in health services uptake. I encourage those interested to visit their work as they are ranked school in the top 20% of social work programmes. The World Bank and USAID frequently have invitations to talks, the ones I attended highlighted the focus of women in development, what role programmes can play to develop rural areas; as it is women in Nepal who ‘stay’ in the villages to farm and care for the family as men migrate abroad or to the capital city Kathmandu.

This experience helped me begin the reflection of what my evaluation means, whether in a policy context or the epistemological context; on my return I spoke to my supervisory team. Prof. Edwin van Teijlingen, Prof. Vanora Hundley, Dr. Catherine Angell and my external supervisor Dr. Padam Simkhada (University of Sheffield) who encouraged me to on this basis strengthen my writing for my discussion on what the research done has meant.