An animated film on Copyrightuser.org titled The Adventure of the Girl with the Light Blue Hair won an AHRC Research in Film Award on 12 November 2015 at an Awards Ceremony hosted at the British Film Institute, Southbank London. 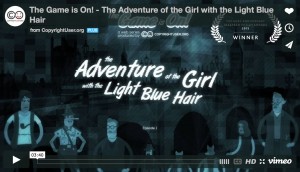 Copyrightuser.org is an online resource, which makes copyright law accessible to creators, teachers, students and members of the public. The project began with Bournemouth University’s Fusion Investment Fund in 2012 after which, the project has been successfully funded by RCUK/AHRC since 2013.

It is a collaborative project carried out by the Centre for Intellectual Property Policy and Management (CIPPM) Bournemouth University and CREATe, University of Glasgow.

The animated film was short-listed for the AHRC 10th Anniversary Research in Film Award within the category Award for Innovation in Film – Best Film in the Year and beat another four contenders to win the award.

The Adventure of the Girl with the Light Blue Hair is the first episode of The Game is On!, web series and is produced by Mr. Bartolomeo Meletti (CREATe, University of Glasgow) and Professor Ronan Deazley (Queens University Belfast). The film draws inspiration from Sherlock Holmes and other well-known copyright and public domain works and provides a springboard for exploring various copyright concepts.

It forms part of a suite of online learning materials for students and teachers in the UK while educating the wider public about what can and cannot be done with copyright works. To achieve this aim, researchers working on Copyrightuser.org produced both video and textual material.

The animated film is enhanced by 12 ‘Case Files’ authored by Ms. Hayleigh Bosher and Dr. Dinusha Mendis (CIPPM, Bournemouth University), which draws on the various elements of the film to explore key principles and ideas underpinning copyright law, creativity, and the limits of lawful appropriation and reuse.

The AHRC Research in Film Awards is designed to recognise the creative and innovative work being undertaken at the interface between research and film. All the winners and full versions of the films can be seen here.