I attended Susanne and Curie’s ‘Facilitating with Lego’ workshop in early June and found it really insightful. There are lots of ways it can be used. It’s great for team building events but could also be used for personal development.  The workshop gave some really good hints and tips of using Lego in group settings but also on an individual basis; along with ideas of probing questions to get people to open up and share their thoughts and feelings about a particular subject or even themselves in a relaxed, informal and fun environment.

In the session we used Lego to build a model that represented our personal strengths. It was really interesting to hear everybody’s explanations in the group and look at their weird and wonderful creations.  Some included tall towers to illustrate, not a person in power as you might imagine but a person working in a role that requires them to see the bigger picture, having an overview.  Other people’s models included propellers which were linked to ‘leading the way’, also extended ‘bendy’ arms showing the strength of flexibility.  There were also several little pink ‘creative’ hats to express how some roles require some creativity… and many little green flags but I can’t recall any ’strengths’ from these pieces, I think we all just agreed they were mostly for decoration!  Whilst we didn’t all have identical pieces in front of us they were very similar, although I was quite jealous of the person with the Superhero Lego person which had its own cape! 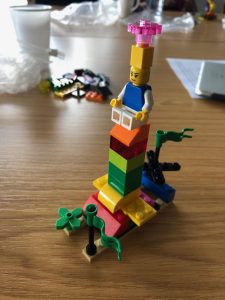 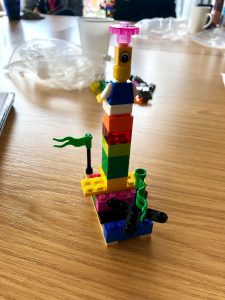 This workshop was a great pre curser to BUCRU’s upcoming Festival of Learning interactive session ‘Demystifying research: helping us make a difference’ and really helped with inspiration, which is the reason I signed up to it.

Our Festival of Learning event was comprised of several interactive sections looking at ways in which members of the public can get involved in clinical research. The Lego was used to demonstrate how complex the research design stage of a project can be.

The audience were split into 2 teams and asked to examine our ready-made ‘medical device’.

(We had built our own ‘device’ prior to them entering the room).  Their task was to copy the device exactly to the best of their ability within a timeframe.  However some bricks/pieces weren’t quite the same and they had to do some improvisation! 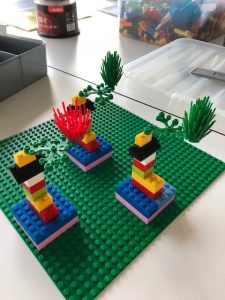 Afterwards we discussed how successful they felt they were, what problems they may have encountered, what strategies they implemented (if any) and if they would do anything differently in the future.  They reported that having the correct resources was essential; that having the model closer would’ve also made life easier, instructions would also have improved the situation… but we didn’t want to make life too easy for them!  All of this illustrated how important it is for someone else to come along, see what you’ve done, replicate it and get the same results that you got.

The clearer we can be and the more input we can get from the public, the better – it is an essential part of designing a study, also referred to as PPI (Patient and Public Involvement).

We also drew some comparisons with a real life research project team. How each person has something to contribute: statistician, research nurse, patient etc. And how there are often many bumps in the road to a successful research project and sometimes you need to take everything apart and ‘build’ from scratch again.

Don’t forget BU Clinical Research Unit (BUCRU) are based on the 5th floor of Royal London House also incorporating your local branch of the NIHR Research Design Service. Feel free to pop in and see us, call us on 61939 or send us an email.