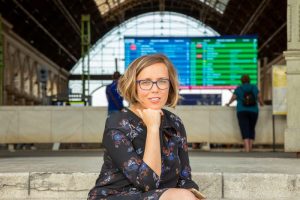 The 8th edition of BU’s annual research magazine – the Bournemouth Research Chronicle – has now been published.  This year’s edition focuses on the work of our Early Career Researchers (ECRs). Read on to find out more about research being undertaken in the Faculty of Management.

​In 2018, according to UNICEF, European countries recorded the arrival of 602,920 new asylum seekers, a figure which includes 20,325 unaccompanied child refugees. The successful integration of refugee children poses a number of policy and practical challenges for both the child and host country. Research carried out at Bournemouth University suggests that providing children with media literacy education can help them learn to navigate their new media-centric environments and make decisions which protect their wellbeing.

While many refugee children have good IT skills, they often lack the skills needed to make critical choices and informed decisions about their wellbeing. Media literacy education can go some way to combat this. It can also help to provide them with the skills that will help them to find employment later in life, as well as protecting them from risks, such as identity theft or radicalisation.

In 2015, at the start of Europe’s migrant crisis, Dr Annamaria Neag was finishing her PhD research into media literacy education. Budapest’s Keleti Railway Station had become a de facto refugee camp, and among the chaos and squalor of the crowds Dr Neag noticed the importance of smart phones to people in this desperate situation.

“Their phones were their guide through Europe, their connection to home and their tool for building new relationships and a new life,” explains Dr Neag. “This was what sparked my idea to combine my research into media literacy with refugee studies.”

To bring this idea to fruition, Dr Neag teamed up with Bournemouth University’s Dr Richard Berger, to pursue funding for her research idea. Using the assistance of BU’s Research Development & Support team, Dr Neag and Dr Berger submitted a successful proposal for the European Union’s Horizon 2020 Research and Innovation programme funding. As a result of this funding, Dr Neag was appointed as a Marie-Curie Fellow at Bournemouth University’s Centre of Excellence in Media Practice (CEMP), where she began the research that had been inspired by her observations at Keleti Railway Station two years’ previously.

Fieldwork has been carried out in the Netherlands, Sweden and Italy – the three countries with the highest number of refugee children at the time of grant application. Research consisted of informal semi-structured interviews with unaccompanied asylum seeking children, refugee mentors, participant observation, and digital ethnography (the study of online communities and cultures).

Her research has found that access to smart phones has great benefits for unaccompanied asylum seeking children who are using their mobiles to check their bank balances, order online goods, or communicate using language translating tools or social media. However, research also shows the associated risks.

Though social media offers a route to meet new people, usage may also restrict someone to a particular community, thus creating an echo chamber of ideas. Additionally, the unintended consequences of exposure to phone addiction, fake news and online community pressures can expose vulnerable children to higher risks.

Dr Neag found that unaccompanied asylum seeking children were using social media applications, such as Facebook, Snapchat or Instagram, which were consistent with young people in their new host countries. However, Dr Neag discovered that these children were also downloading simplified versions of the same applications which worked in their home countries.

“Applications such as ‘imo’ or ‘Facebook Lite’ can be used with in areas with poor internet connections, which is often the case for their relatives living in their home countries,” says Dr Neag, “It was very interesting to see that some children, who were illiterate, were using these apps to communicate by using functions such as voice messages.

“My research also showed that there were similarities in the ways in which young Europeans and unaccompanied asylum seeking children use social media. It showed that there was a shared desire to present a beautified version of their lives on social media. For example, selfies were very popular with refugee children, who often enjoyed sharing photos of themselves in front of landmarks such as the Milan Cathedral.”

Dr Neag believes that educating the mentors and guardians of unaccompanied asylum seeking children may be the most effective way to improve media literacy skills among this large and hugely diverse group. Her findings are now being collated into an app called Mentor+Media which will offer help to refugee mentors and guardians about media literacy. The app development team consists of Dr Neag, Dr Berger and Kyle Goslan, a BU demonstrator in digital media design. NGO experts are also helping to inform the app’s content.

“The purpose of the app is to communicate the importance of being critical of various forms of media,” explains Dr Neag. “This knowledge can then be passed on to unaccompanied asylum seeking children on an individual basis – in a way that suits their needs.”