Co-creation for Screened and Heard; 5 films made in lockdown

Screened and Heard, headed up by Annie East with Dr Sam Iwowo, is a collection of five short films produced by women in lockdown who set themselves a challenge during the pandemic to tell a story, learn new skills and explore new ideas. Provoked initially by a newspaper article about women’s research dropping during lockdown whilst men’s increased, this group response was not only about the final films but about the process and support given to enable these women, who each had different caring responsibilities, the opportunity to have a voice and complete a project under the complex conditions that the pandemic presented. Annie East and Dr Samantha Iwowo plan to use the films as a springboard to further research areas. Below is a Q&A with the editor, alumnus Owen Trett BA Television Production Class of 2020. 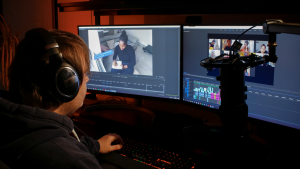 Why did you want to get involved with Screened and Heard?

Screened and Heard was a great opportunity to take part in after graduating from Bournemouth University. I believe that taking part in a project that focused on showcasing the voices of women filmmakers during the lockdown of 2020 was extremely beneficial to the industry.

What involvement did you have with each film?

I was then in control of the detailed edit for most of the films. It was a great way of improving my editing skills and working with a variety of different formats and visions.  My graduate project was recorded entirely through Skype and influenced by the 2018 Aneesh Chaganty film “Searching”, so I applied these skills from my graduate film to the edit of Screened and Heard.

A year on what do you think about the films?

It’s been interesting to see the direction that the film and TV industry has headed in going into 2021. I feel that all early lockdown content, like “Staged” (BBC) for example, has a very grounded aesthetic compared to pre-lockdown content. Seeing content like this, of actors at home recording pieces to camera, as having an authenticity to it.

I feel that the films showcased in Screened and Heard have a similar vibe, this sort of authentic look to them is hard to replicate outside of the context of Covid. “Working from Home” for example, dealing with themes of lockdown relationships and home-schooling, I feel that we will take a lot of these grounded concepts and continue to use them throughout the future of TV / film storytelling.

What was it like working on an project based on a true story about bereavement during Covid 2020? (In Zoom We Trust)

I feel privileged to be able to work on a project that dealt with such a raw and personal topic. I think that, because the content dealt with quite a sensitive subject, there was a lot of pressure to make sure that it was edited correctly, in a manner that was respectful.

Samantha (Iwowo) really has an amazing directorial vision, and allowed me to use creative techniques that I hadn’t used in this format before. I was lucky to be able to work with her on this project, and I’m glad that she had a positive response to the edit.

How has being involved with Screened and Heard helped you as you graduated and went to look for work in the UK film and TV industry?

Trying to find work during a pandemic was not the easiest process in the world. However, working on the Screened and Heard projects really helped boost my portfolio. it showed that as an industry worker, I had the ability to overcome limitations and adapt to complicated situations.

In early 2021 I was offered a job working from home as a Junior Video Editor for the video games company Sumo Digital.

I loved my time at BU, I met some of the most amazing and talented students from both the BATV and BA Film courses. The staff were some of the most supportive tutors that I have ever had the pleasure of being taught by. A lot of practitioners within the media industry do argue that university isn’t needed for a media career, and I would like to respectfully disagree. Those three years at BU allowed me to figure out who I was, who I wanted to be, and created a network of friends and colleagues that I will continue to use throughout my career. Although my time at BU was cut short by the pandemic, I would not have traded in those years for anything else, and if you gave me the chance to do it all again, I would do it in a heartbeat.