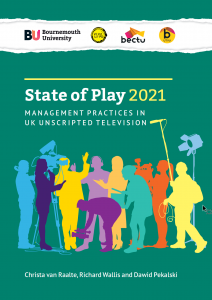 This week sees the publication of the Faculty of Media & Communication’s report State of Play 2021: Management Practices in UK Unscripted Television. Described by Marcus Ryder MBE as one of the most comprehensive industry assessments in years, the report is the culmination of eight months of qualitative data analysis from a survey of people working in the unscripted sector of the UK’s TV industry. A preliminary report, based on only the quantitative findings, was published in January. This week’s full report – a document of some 100-pages – gives context, colour and detail to the worrying statistics. The picture it paints is one of a troubled industry urgently in need of reform.

“The State of Play report details the underlying problems facing freelancers in the TV industry, which give rise to shocking rates of bullying and harassment and a continuing lack of diversity in the industry.”

Whilst in many ways, UK television has been a great national success story, this success has been at the expense of those who work in the industry. The report describes experiences that would not be tolerated in any other business. The casualisation of the workforce has devolved employer risk, ultimately, to individual freelancers who have little or no protection for their own livelihoods or wellbeing. Work is characterised by last minute job bookings and last-minute cancellations; extended hours without breaks or compensation; discrimination; nepotism; sexual harassment; and workplace bullying beside the prevailing precarity that makes it almost impossible for them to challenge any of these conditions. The report, which makes six major recommendations with implications for both government policy and structural change within the industry, will feature in a panel discussion at next week’s Edinburgh Television Festival.

The full report can be downloaded from here: