Climate change, species extinction, flooding – humanity was facing all these threats to survival thousands of years ago. 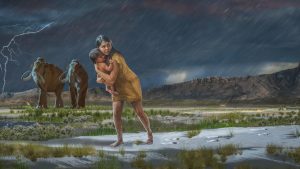 Join our next online public lecture to discover the powerful messages from the past being revealed by BU’s archaeology and palaeontology researchers – and what they might tell us about how to deal with the crises of the 21st century.

Learning from the past: how humans have adapted to crisis will take place on Thursday 12 May and will run from 7pm to 8.30pm.

Principal Academic Dr Sally Reynolds will talk about her work exploring fossil footprints in White Sands National Park and what they can tell us about human migration and the hunting of megafauna, such as giant sloth.

Lecturer in Archaeological & Palaeoenvironmental Modelling Dr Philip Riris will discuss how ancient humans adapted to changes in their climate and environment.

There will also be the opportunity for discussion and questions.

This is the fourth event in our online public lecture series, which is showcasing BU research and expertise as part of the #ourBUstory campaign. Future events will explore listening to seldom heard voices, and supporting the regional economy.

Writing for The Conversation, Professor Matthew Bennett and Dr Sally Reynolds discuss the potential discovery of an early human species…

A new species of early human? Why we should be cautious about new fossil footprint findings

A collection of fossil footprints at Laetoli in Northern Tanzania, preserved in volcanic ash and dated to 3.66 million years ago, are still yielding surprises almost 45 years after their discovery.

Based on a re-analysis of fossil footprints from one of Laetoli’s sites, the authors of a new study published in the journal Nature say they’ve discovered evidence of a previously unknown early human species at this spot. However, there are reasons to be cautious about this conclusion.

Before we delve into these new findings, let’s orientate ourselves. Laetoli, an area well-known for paleontological excavations, has a number of distinct sites, each denoted by letters of the alphabet. British paleoanthropolgist Mary Leakey and her colleagues first reported fossil footprints in 1978 at Site G, the main track site at Laetoli.

In 2016, a team led by Fidelis Masao, an archaeologist in Tanzania, uncovered additional tracks close to Site G, at Site S. The footprints from Sites G and S are usually assigned to the well-known ancestral human (hominin) species Australopithecus afarensis, of which the skeleton “Lucy” is the best-known example.

Less well-known is the fact that in 1976, two years before Leakey’s famous discovery, a set of five footprints were found at Site A. Importantly, all these sites occur on the same ash surface, so we know they date from the same time period.

But the five footprints from Site A were largely forgotten, eclipsed by Leakey’s later discovery. This was understandable because the footprints at Site A had poor morphological shape, or definition, and there were fewer of them (there are more than 30 individual footprints at Site G).

In 1987, American paleoanthropologist Russell Tuttle suggested that these footprints may have been made by a species of bear, or by a different hominin from those of Site G. He also cautioned that the diversity in the footprints’ form as compared to those at Site G might simply reflect the changing properties of the ash layer over which the hominin walked.

Seeking to find out who these footprints belonged to, a team of international researchers re-excavated the tracks from Site A in 2019. Their findings are the focus of the new paper in Nature.

The researchers used various methods including photography and 3D scanning to inspect the Site A footprints. They compared the width and length with footprints from black bears, chimpanzees and humans, as well as the tracks from Sites G and S. They also explored the bear hypothesis by examining video footage of modern black bears which, on rare occasions, walk upright.

One particular feature they draw attention to is that the Site A trackway cross-steps, almost as if one was attempting to toe a line as part of sobriety test. Based on this and their other findings, the authors suggest that the tracks at Site A were made by a different hominin than those at sites G and S. They argue that two hominin species walked the Laetoli landscape 3.66 million years ago.

The broader evolutionary context at this time suggests what the authors are proposing would be possible. There was more than one species of hominin on the African landscape during this period, and we’ve seen anatomical variation in the foot within some Australopithecus species. That said, it’s quite a significant leap to identify a second species based on a handful of poorly defined tracks.

Variation in trackways is the key issue here. Imagine going for a walk down a beach or sandy path. The footprints you make will vary from one step to the next. This reflects natural variability in human gait, as well as subtle differences in the characteristics of the ground you’re walking on.

Footfall and the resulting footprints are more variable than once thought and some have argued that even individuals of the same species may have highly unique gaits.

In this context it is rather surprising that the authors of this paper make inferences not just about one individual, but a whole species.

One way to strengthen their conclusions would be to use modern “whole foot” methods to statistically compare the best footprint at Site A with those at Sites S and G. This could be an approach for future research.

Certainly more evidence is needed to determine whether these footprints justify this excitement, and do indeed belong to another early human species.