In 2018 BU researchers Dr. Jenny Hall and Prof. Vanora Hundley in the Centre for Midwifery, Maternal & Perinal Health (CMMPH) published a paper on disabled women and maternity care.  This scientific paper was co-authored with Ms. Jillian Ireland, Professional Midwifery Advocate in University Hospitals Dorset NHS Foundation Trust and BU Visiting Faculty, and Dr. Bethan Collins at the University of Liverpool (and former BU staff member).  Their paper ‘Dignity and respect during pregnancy and childbirth: a survey of the experience of disabled women’ appeared in the Open Access journal BMC Pregnancy & Childbirth and was commissioned by the charity Birthrights.   The study shows that disabled women are generally not receiving the individualised care and support they that they need to make choices about their maternity care.   At the time of publication this BU paper was picked up by various media, including in South Africa.

The study resulted in change in St Mary’s Maternity Hospital in Poole (as part of maternity care provision by University Hospitals Dorset NHS Foundation Trust).  One of the innovations at Poole Maternity Hospital was  supporting a woman to give birth in hospital with her assistance dog by her side to help ease her anxiety. 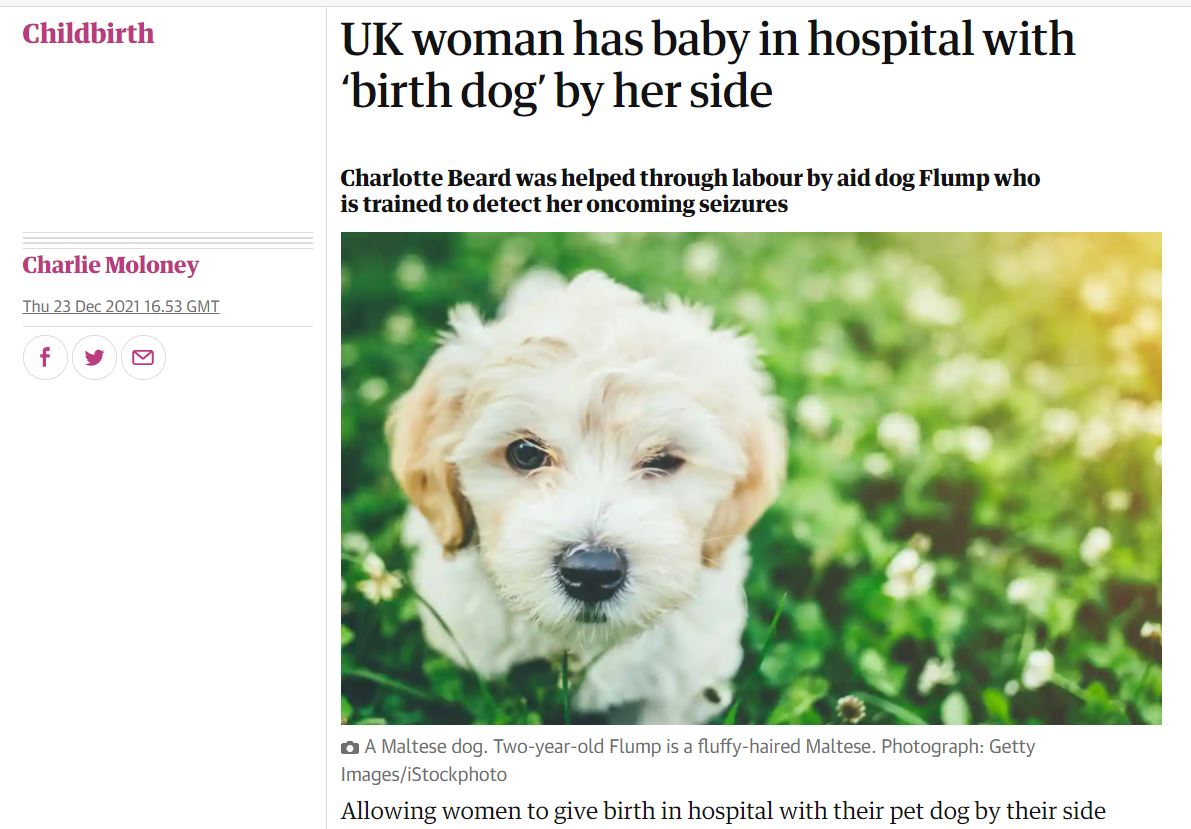 This story was picked up by several newspapers including the local Bournemouth Echo under the heading ‘Dog to accompany Poole dog handler as she gives birth‘, and by several national newspapers last week when the The Guardian published ‘UK woman has baby in hospital with ‘birth dog’ by her side‘, The Times printed ‘Baby safely delivered, with a little help from woman’s best friend‘, whilst the online news website Big World Tale used the headline: ‘Woman, 24, gives birth in hospital with a DOG as ‘medical aid”.

Universities are always on the look out for impact generated by its research.  This seems a clear example of joint research between BU and University Hospitals Dorset NHS Foundation Trust staff resulting in innovations in practice.

Congratulations to all involved!

The long awaited (and very long) consultation on the role and functions of the Office for Students was published this week. In fact there are several separate consultations (Wonkhe have helpfully grouped them all on one web page):

The consultations are open until 22nd December and BU will be reviewing them and preparing responses – please let policy@bournemouth.ac.uk know if you would like to be involved.

There is a huge amount of detail and a lot of areas for discussion here, but interestingly the Minister and the press chose to focus on freedom of speech yesterday. The Times published an interview with Jo Johnson discussing the proposal that measures to protect freedom of speech should be a condition of OfS registration. The Guardian notes proposed powers for the OfS to fine or suspend the registration of universities that fail to protect the freedom of speech on campus, including student unions that ‘no platform’ controversial speakers. There has been a lot of commentary on this – not least that students’ unions are independent organisations. It is really interesting to note that in the summary of the consultation prepared for students by the Department for Education, freedom of speech is not mentioned.

The relevant bit of the consultation starts on page 32 –

There has of course been something of a media/social media storm, with rage from both ends of the political spectrum about those with different views allegedly seeking to stifle or prevent free speech, big disagreements on the role of trigger warnings, safe spaces and “no platforming”, and a number of voices pointing out that universities are already subject to legal obligations on both free speech and the Prevent duty and this is all a bit over-played.

But apart from this issue, the consultation has much broader scope. It sets out the broad objectives for the OfS:

The OfS will seek to mitigate the risk that each of these four objectives is not met and:

The many other areas covered in detail include

We will look at some areas in more detail in the following weeks.

The impact of universities

Meanwhile, Universities UK (UUK) published a report on the Economic Impact of Universities in 2014-15. Some highlights:

Student Loans and Value for Money

Meanwhile the Economic Affairs Select Committee is examining if students get value for money (HE, FE and technical education) through oral evidence sessions. Follow it here

50% of students are First in Family – This week the Telegraph drew on UCAS data to report that half of students who started a degree last year were first in family to attend HE. However, the article is disparaging as many of these students attended ‘low’ or ‘mid-ranking’ universities and few studied the ‘top’ subjects (listed as medicine, maths and science). The article went on to raise the current headline grabbing debate over fees and value for money and stated: “critics said last night that the figures showed that too many students were attending low-performing universities which charge “outrageous” fees but fail to improve social mobility.”

Les Ebdon (Director, OFFA) stated: “Excellent progress has been made in widening access to higher education for the most disadvantaged young people. But for too long, this progress has only been incremental. We now need to see transformational change.

“Adopting a genuine whole institution approach – where access is a key priority at every level – is the biggest thing a university or college could do to make change happen. This research offers a vital opportunity to make the further, faster progress we badly need to see.

Q – Stephen Gethins (SNP): With reference to the Government’s policy paper, Collaboration on Science and Innovation: A Future Partnership Paper, published on 6 September 2017, whether it is her policy to extend visa entitlement to the spouses and dependents of EU academics who can work in the UK after the UK has left the EU.

Q – Stephen Gethins (SNP): With reference to the Government’s policy paper, Collaboration on Science and Innovation: Future Partnership Paper, published on 6 September 2017, what representations she has received from universities and national academies on the potential effect of changes to freedom of movement on the UK’s ability to attract and retain high quality researchers.

A: Brandon Lewis (Con): The Government recognises the valuable contribution migrants make to our society and we welcome those with the skills and expertise to make our country better still. But we must manage the process properly so that our immigration system serves the national interest.

We have been clear that after the UK leaves the EU, free movement will end, but migration between the UK and the EU will continue and we are considering a number of options as to how this might work. We will be setting out initial proposals for our future immigration arrangements later in the year.

The Government recognises that it is important that we understand the impacts on the different sectors of the economy and the labour market and want to ensure that decisions on the long-term system are based on evidence. On July 2017, we commissioned the independent Migration Advisory Committee (MAC) to advise on the economic and social impacts of the UK’s exit from the European Union and also on how the UK’s immigration system should be aligned with a modern industrial strategy… The Government will carefully consider any recommendations made to it by the MAC before finalising the details of the future immigration system for EU nationals.

The Government also regularly engages with sectoral bodies – including those in the scientific and academic sectors ¬- to ensure our immigration routes work effectively to enable businesses to access the talent they need. Their views do, and will continue to, inform our decisions on any changes to the system.

The Policy team compiles details of the key HE and niche research consultations and select committee inquiries on the consultation tracker. BU responses to HE consultations are managed by Sarah and Jane.

Let us know you’re interested! We invite colleagues across BU to provide response input, however, if there is a consultation in your area of expertise don’t wait for an invite – contact us on policy@bournemouth.ac.uk – we’d love to hear from you so we can access all the pockets of expertise across BU. Take a look at the consultation tracker to find out if there is a current inquiry related to your role.

To view the responses BU has submitted to recent consultations and inquiries across all topics click here.

Teaching excellence: The University Alliance has published Technical and professional excellence: Perspective on learning and teaching.

TEF Gold: HEPI have released Going for Gold: Lessons from the TEF provider submissions. The report breaks down the influential aspects of the provider submissions which the author suggests may have swayed the panel’s final award decisions. While the report is based on opinion it offers suggestions to providers and Government on how to improve the qualitative aspect of the TEF submission. Spoiler alert: BU features frequently within the document.

Alternative Providers: The National Audit Office has published their Follow-up on alternative HE providers. The report notes several area of progress:

However, early data implies graduates from alternative provider’s progress to further study or employment at a lower rate and lower entry salary than graduates from mainstream HE institutions.