The general effects of lockdown on healthy individuals range from a general annoyance to a major limiting factor in life, especially in lockdown affects someone livelihood and/or mental health. These effects have been well documented in the media. At a societal level these effects are more mixed, first and foremost, there is positive outcome in terms of a reduced spread of the infectious disease COVID-19. Further positive effects include a reduction in air pollution, water pollution levels (in Venice), traffic jams, but also fewer break-ins (as more people are at home for more of the time). Whilst negative effects include not only economic decline, but also a lack of opportunity to travel for work or leisure, children missing education and people avoiding health care professionals for screening and treatment of diseases other then COVID-19. We have also learnt that lockdown affects different groups in society differently, some quite unexpectedly. For example, AbilityNet highlighted that “For students living with physical impairments and long-term health conditions, the benefits of studying from home and avoiding the exhausting experience of accessing face-to-face learning has left them with more energy to apply to their studies” [1].   Even before the first lockdown universities in the UK had been pro-active in their response to the pandemic [2]. One of the practical responses was to move to webinars, online teaching, marking and meetings. Before March most university academics don’t much about Zoom, Teams, Jitsi Meet or Google Meet, and today most academics will have used most of these platforms (and several others) for research meetings, webinars and conferences. 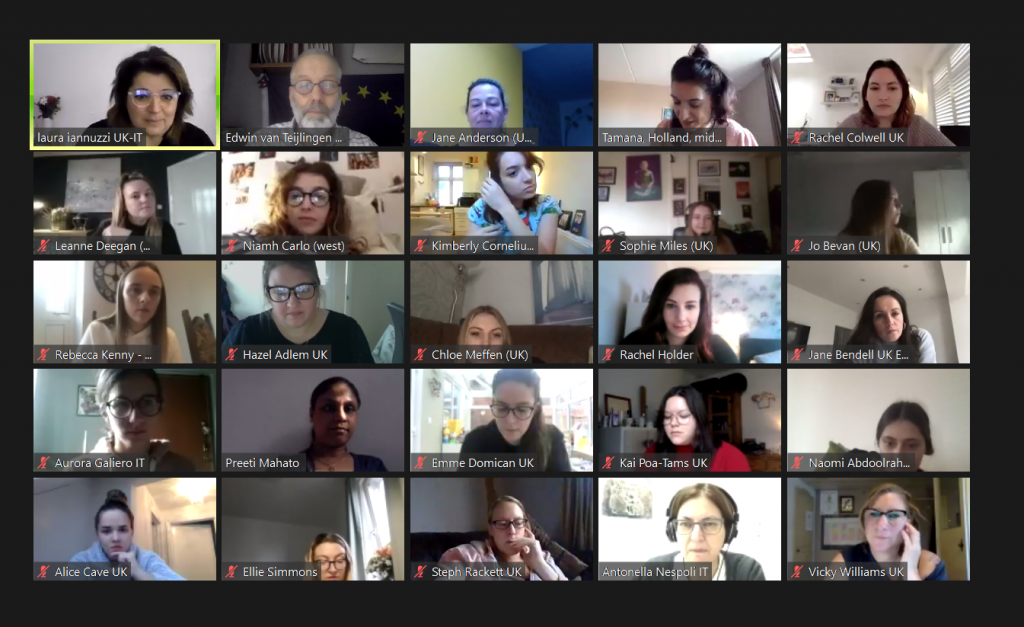 With lockdown this all has changed, like my BU colleagues I teach every week using Zoom, meet colleagues online through a range of platforms, meet students for individual tutorials through Skype or Teams. Although having the occasional limitation, there is a great opportunity as it removed the need for staff and students to be in the same room. One example of a BU education innovation was last week’s International Student Midwives’ Networking Day held on November 18th. With the restrictions of lockdown on midwifery students the BU Midwifery Team led by Dr. Laura Iannuzzi and Dr. Juliet Wood used the opportunities provided by Zoom to bring together midwifery students from across the globe. Using their long-established research links [3-16], BU academics manage to bring together student midwives from Italy, Nepal and the Netherlands to discuss midwifery and maternity issues with fellow midwifery students at BU. The day was nicely broken into two with a lunchtime event called ‘Zoom the midwife’, which as the third of its kind. In this ‘Zoom the midwife’ webinar BU’s Dr Rachel Arnold and BU Visiting Faculty Margaret Walsh shared their experience of working in different cultures for projects in Afghanistan and Nepal respectively. 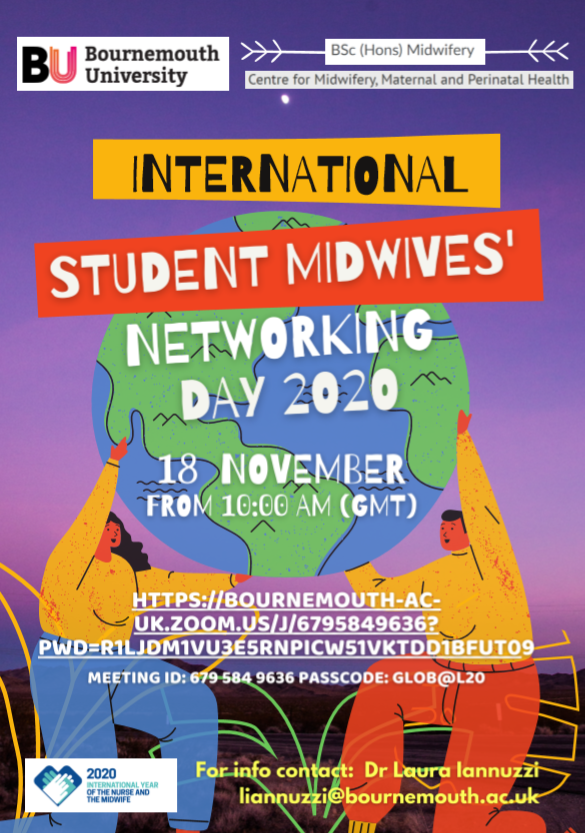 Our second example is a project to support midwifery education in Nepal. The Centre for Midwifery, Maternal & Perinatal Health (CMMPH) in collaboration with Dalarna University in Sweden and University Hospitals Dorset NHS Foundation Trust produced a draft Bridging Course for nursing lecturers in Nepal who are currently teaching midwifery and maternity care. This project is funded by GIZ (Gesellschaft für Internationale Zusammenarbeit). As part of this project BU offers academics at NAMS (National Academy of Medical Sciences) in Kathmandu support in their professional and pedagogic development.

Following the lockdown and seeing the success of online teaching of BU’s students earlier in 2020 we decided to try out online teaching with midwifery lecturers at NAMS.   Since many people in Nepal only have a one-day weekend (Saturday) Sunday is usually a working day and due to time difference early Sunday morning are ideal times for webinars. To date online sessions in Kathmandu have been delivered by Juliet Wood, Michelle Irving, Edwin van Teijlingen and CMMPH Visiting Faculty Jillian Ireland (Professional Midwifery Advocate in Poole). The sessions proved very popular with 30 to 40 people regularly attending online from Nepal.

With challenges to delivering face-to-face lectures and tutorials at universities, online teaching and webinars have opened a whole set of new opportunities to internationalise our education. 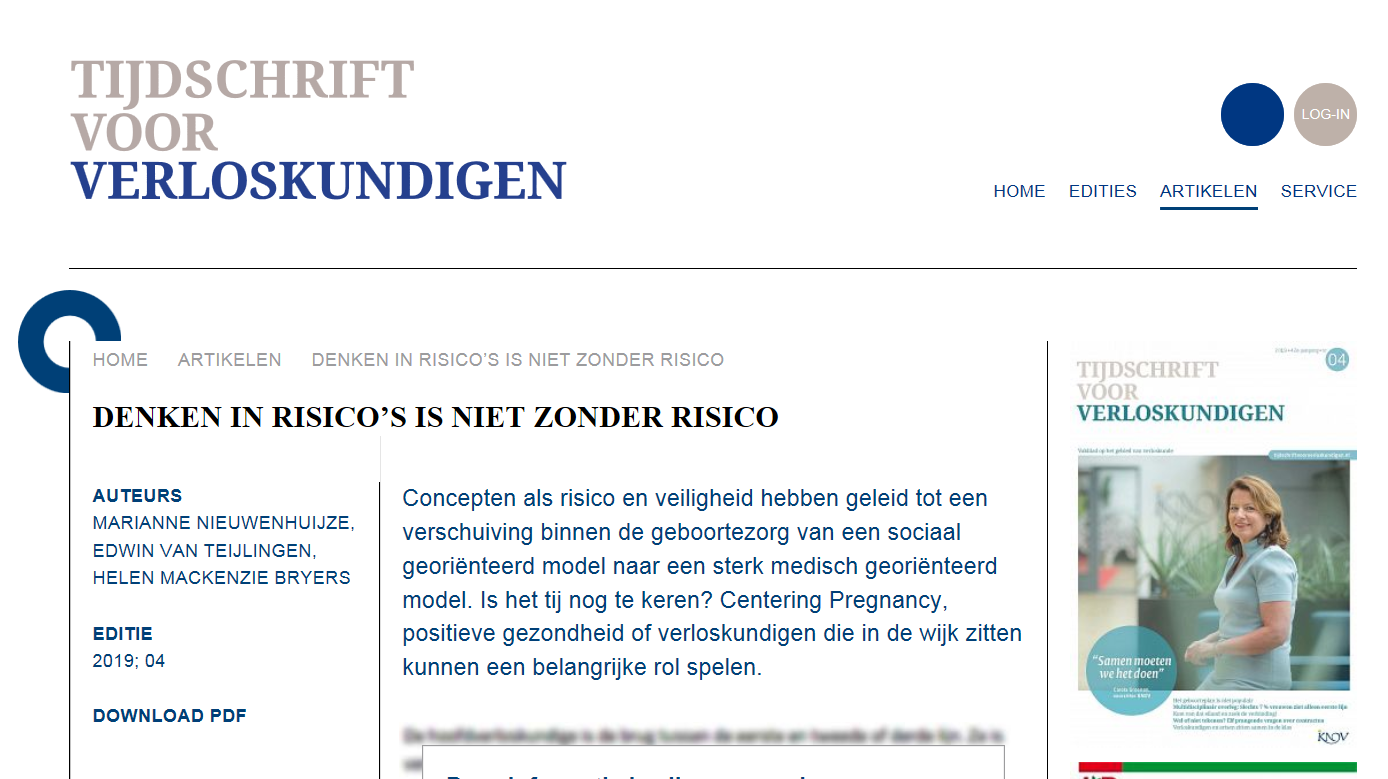 This autumn the Dutch journal for midwives Tijdschrift voor Verloskundigen published a paper on the risk associated with thinking in terms of risks [1].  Dr. Marianne J Nieuwenhuijze is the lead author of this paper written in Dutch.  Marianne is associated with the Research Centre Midwifery Science at the Academie Verloskunde Maastricht (the Netherlands). Her co-authors are BU Professor Edwin van Teijlingen in the Centre for Midwifery, Maternal & Perinatal Health (CMMPH) and Dr. Helen Bryers who is Honorary Public Health Specialist (Midwife) at NHS Highland. The paper builds on earlier work around the concept of the social/medical model in pregnancy and childbirth [2-7]. On Friday January 22nd 2016 FHSS Prof. Edwin van Teijlingen delivered a keynote address at the Annual Research Conference of the Dutch Midwifery Schools.  The Dutch name for the event is ‘conferentie kennispoort’, in English ‘conference knowledge portal’ OR in a slightly different translation ‘conference knowledge gate’.  The presentation aimed to get midwives, maternity care researchers and midwifery students and others in the audience to think differently about the world in which they work / practise.  Prof. Edwin van Teijlingen used notions of a social versus a medical model in his talk.  These are based on a number of sociology and midwifery publications of this concept over the past decade.[1-4] Sociologists recognise two different approaches or philosophies as first a social model and, secondly, a medical model of childbirth. The social model stresses that childbirth is a physiological event that takes place in most women’s lives. The medical model highlights that childbirth is potentially pathological (or risky). In the latter view every pregnant woman is potentially at risk, hence she should deliver her baby in an obstetric hospital with its high-technology screening equipment supervised by obstetricians, the experts when something goes seriously wrong in childbirth. In other words, pregnancy and childbirth are only safe in retrospect.

Professor Edwin van Teijlingen (CMMPH) has been invited to present a key note speech at the Kennispoort Verloskunde conference in Utrecht, the Netherlands in January 2016.  He will be speaking about ‘Dealing with risk in maternity care: the social versus medical model’.  The presentation is based on a number of publications around the sociological topic of the medical/social model of childbirth. [1-3]

One of the ways sociologists analyse health and health care is in terms of a ‘medical’ versus a ‘social’ model, or in this field, a midwifery model. As pregnancy and birth are biological and physiological events which are very much embedded in a social and cultural setting,  these are good examples to highlight the use and misuse of the medical and social model.  Modern Western society has a slightly paradoxical view of pregnancy. On the one hand, the average woman in childbirth is not ill because pregnancy is not an illness. On the other hand, pregnant women are deemed to need a lot of health care throughout pregnancy and childbirth. Making the distinction between a medical and a social model of a social phenomenon is not exclusive to midwifery. Over the past decades researchers have pointed to the existence of a medical and social model in alcohol misuse, obesity, sex, eating disorders, infertility treatment, to name but a few phenomena.