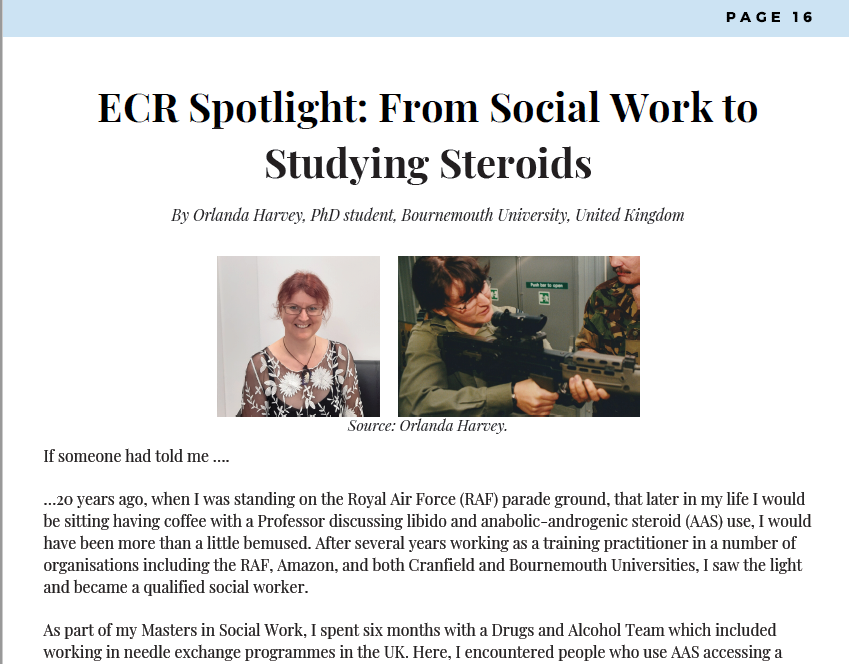 PhD student Orlanda Harvey featured in this month’s edition of HED Matters as Early Career Researcher (ECR) with an article on ‘ECR Spotlight: From Social Work to Studying Steroids’ [1].  HED Matters is an online magazine about the use of legal and illegal substances to enhance the human condition published biannually by the HED network. It brings together recent advances in drug research and experiences from both drug users and practitioners. This December 2019 issue focuses on sexual human enhancers.  Orlanda’s PhD research project addresses men’s experiences of recreational Anabolic Androgenic Steroid (AAS) use. 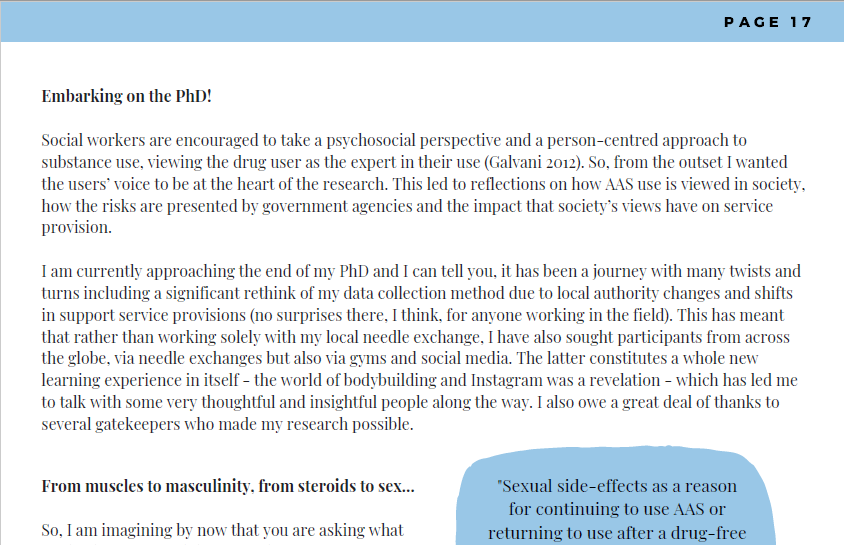 Earlier this year she also published a peer-reviewed paper form her research : “Support for people who use Anabolic Androgenic Steroids: A Systematic Scoping Review into what they want and what they access” in the Open Access journal BMC Public Health [2].  Since there is a paucity of research on support for people using Anabolic Androgenic Steroids (AAS), this latter article synthesised the available evidence.  Orlanda’s  PhD I the Faculty of Health & Social Sciences is being supervised by Dr Margarete Parrish, Dr Steven Trenoweth and Prof Edwin van Teijlingen.

This session will provide an introduction to digital virtual consumption, exploring the emergence of digital consumption objects and the opportunities and issues they present for consumers and for marketers.

Dr. Mike Molesworth is Principal Teaching Fellow at the University of Southampton. Principal Teaching Fellow. He has been lecturing since 1996, for most of that time focussing on online consumer behaviour and emerging consumer cultures. He was a Teaching Fellow in the Centre of Excellence in Media Practice at the Faculty of Media and Communication at Bournemouth University, where amongst other things, he was involved with innovations in online course delivery. More recently he helped set up the Creative Enterprise Bureau, a unique staff/student collaborative consultancy at Bournemouth University, working for clients such as ITV, Channel 4, Toyota and Samsung. With colleagues he has won several best paper awards in journals and at conferences, including my work on digital consumption with Dr Janice Denegri-Knott in Consumption, Markets and Culture, and with Becca Watkins at the international Consumer Culture Theory Conference. He has also won a ‘most cited’ award in Teaching in Higher Education, for his work on the marketisation of Higher Education

Dr Rebecca Watkins is a Lecturer in Marketing at Cardiff University. She holds a PhD in Marketing from the University of Southampton, and a BA (Hons) in Advertising and Marketing Communications from Bournemouth University. Rebecca’s research uses qualitative methods to explore the impact of digital media upon consumer culture, in particular the ways in which notions of owning and possessing are transformed in the context of digital objects. Her work has been published in the Journal of Marketing Management, the Journal of Consumer Culture & Research in Consumer Behaviour, whilst her work in human-computer interaction, in collaboration with the Human Experience and Design research group at Microsoft Research, has been presented at the world’s leading HCI conference.

After the height of the credit crunch, the blame game began, and focus fell firmly on bankers, and male bankers in particular, as being responsible for the crash. Variously dubbed the ‘Man-cession’ or the ‘He-Cession’ by media and political commentators, accusations that an excessively ‘masculine economy’ contributed to the crunch grew in the weeks and months following the economic downturn. Contemporary fiction was quick to respond to the global economic crisis as a source of inspiration for post-millennial narrative. Through this new genre of ‘Crunch Lit’, fiction continued its historical commitment to demystifying the financial world. Examining two case study examples of the new genre – Faulks’ A Week in December (2009) and Lanchester’s Capital (2012) – the paper will interrogate how and why fiction represents the twenty-first century impact of financialisation and its penetration of language, fashion and financial culture to question dominant narratives of the male banker as a new cultural villain for the post-millennial period.

Dr Katy Shaw is Principal Lecturer in Contemporary Literature at Leeds Beckett University. She is also editor of the internationally peer reviewed C21 Literature: journal of 21st-century writings. Her research interests include contemporary writings, working class literatures, regeneration and the languages of comedy. She has published extensively on working class women’s writings, the contemporary novel and twenty-first century literature. Her monograph Crunch Lit examines fictional responses to the global credit crunch.
About the series
This new seminar series showcases current research across different disciplines and approaches within the Faculty of Media and Communication at BU.The research seminars include invited speakers in the fields of journalism, politics, narrative studies, media, communication and marketing studies. The aim is to celebrate the diversity of research across departments in the faculty and also generate dialogue and discussion between those areas of research.