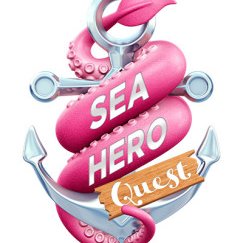 I am absolutely delighted to be part of the amazing Sea Hero Quest team. Sea Hero Quest is a game for mobile phones in which users solve navigation tasks. With more than 4 million contributors/players it is one of the largest citizen science projects ever. We  used Sea Hero Quest to analyse navigation performance of several hundred thousand participants. In this Nature paper – which came out today – we showed that people who grew up in rural areas have better spatial navigation skills that those raised in cities.

Follow the links below for more information about the paper and Sea Hero Quest:

People who grow up in gridlike cities like New York seem to struggle to navigate as easily as those who come from rural areas or intricate cities, researchers reported. The findings one day may lead to better tests for early dementia. https://t.co/Eqg5idfCdu pic.twitter.com/sB3nS8drZz 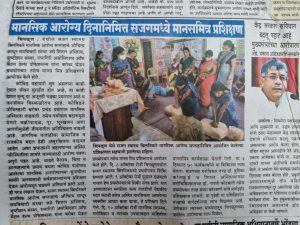 Chiplun, a city in the Ratnagiri district in the state of Maharashtra. This is the hub for our collaboration and a key to providing more mental health support and well-being in the rural area within the region. This week during the Mental Health Awareness day in India – we tailored a camp that addressed some of the core issues the community face.

Severe flooding is a key issue in this region, we trained over 70 Mind Buddies (or Manas Mitra – in Hindi) integrated first-aid training and mental health and well-being aspects. We hope to create support for these people and provide them with more skills training and build the capacity of community volunteers across the region. 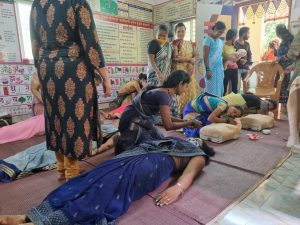 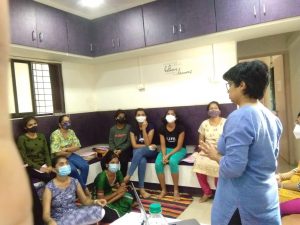 Congratulations to Dr. Shanti Shanker in BU’s Department of Psychology and Dr. Pramod Regmi in the Department of Nursing Science on their paper ‘The Interdisciplinary Team Not the Interdisciplinarist: Reflections on Interdisciplinary Research’ which was accepted over the weekend by the journal Europasian Journal of Medical Sciences.  This interesting paper is co-authored with two BU Visiting Faculty, Ms. Jillian Ireland, Professional Midwifery Advocate in Poole Maternity Hospital (University Hospitals Dorset NHS Foundation Trust) and Prof. Padam Simkhada based at the University of Huddersfield.  Co-author Dr. Sharada Wasti is also based the University of Huddersfield.

With interdisciplinary research growing in popularity, researchers, lecturers, journal editors and funders to consider how this is going to work in reality.   This paper argues that interdisciplinary working is with in the team, not ‘in a person’.  Multidisciplinary teams provide unique opportunities for researchers from different disciplines (and hence different ways of working and thinking) to collaborate with one another.  We need to be careful not to try to create interdisciplinarists, or at least, not too many.  We need people who are strong in their discipline and open-minded/flexible/reflective enough to see the value of other people’s disciplines.

The Departments of Psychology (SciTech), Midwifery and Health Sciences (HSS) from Bournemouth University and SSLA part of Symbiosis International (Deemed University) were successful in getting the United Kingdon India Education Research Initiative (UKIERI)

The Study in India Programme has been designed in collaboration with BU’s project partner university Symbiosis International in India, where this will be hosted.  This exchange will offer a program of interactive lectures, workshops, research methods seminars, clinical experience observations, and relevant field visits. 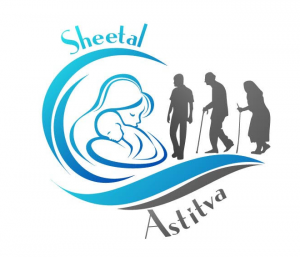 Students will also contribute to research with Sheetal Astitva, which is a GCRF funded initiative aimed to improve mental health in rural India and Nepal. The lead researchers for this initiative are Prof. Edwin van-Teijlingen and Dr. Shanti Shanker. Last year BU signed a Memorandum of Agreement (MoA) with  Manmohan Memorial Institute of Health Sciences (MMIHS) in Kathmandu, Nepal.  This week Dr. Bibha Simkhada, Lecturer in Nursing, Dr. Shanti Shanker, Lecturer (Academic) in Psychology, and Prof. Edwin van Teijlingen in the Centre for Midwifery, Maternal & Perinatal Health (CMMPH) delivered one-day workshop on qualitative and mixed-methods research approaches.  The workshop was very well attended by MSc students, not just from MMIHS, but also those from several other colleges and universities. MMIHS is part of BU’s latest bids for ERASMUS Higher Education Student & Staff Mobility between Programme and Partner Countries (Key Action 107) – International Credit Mobility.  Bournemouth University’s strategic plan known as BU2015 has as one of its pillars our desire to “enrich society by having a significant impact on challenges world-wide“. Through Fusion BU aims to (a) have a positive impact world-wide on the challenges facing society; (b) ensure staff, students and graduates enrich society as active citizens in their communities; and (c) strengthen our shared impact through worldwide partnerships.  Expanding and developing the existing BU-MMIHS partnership is a excellent stepping stone for the ERASMUS application. A new multidisciplinary project in South Asia, run between two of Bournemouth University’s Faculties, has recently been funded.  The cross-faculty project “Scoping Study to understand the maternal health, ageing and wellness in rural India to develop a grass-root centre addressing these issues” has Dr Shanti Shanker (Psychology) as its principal investigator in collaboration with Prof Edwin van Teijlingen (Human Sciences & Public Health).   These BU lead researchers have been working in India and Nepal for more than a decade.

This project was recently awarded £76k from the HEFCE GCRF (Higher Education Funding Council for England, Global Challenge Research Funds) Call, at Bournemouth University.  The project will be running from 2017 to 2021 between Maharashtra, India, Nepal and the UK.  This important research initiative  aligns closely with Bournemouth University’s strategic plan around South Asia through Connect India.  Connect India is BU’s hub of practice which focuses on the world’s most populated areas and a global region which is developing rapidly in many ways. Thanks to funding from the Ageing and Dementia Research Centre (ADRC) and the BU Psychology Department, I recently had the privilege to attend and present at the 32nd International Conference of Alzheimer’s Disease International (ADI) in Kyoto, Japan. The conference is the largest in the dementia field and attracts interest from people all over the world. This includes academics, health and social care practitioners, medical professionals as well as people living with dementia and their care partners. During the conference I spoke about my PhD research that concerns the social inclusion of older men with dementia. I emphasised the importance of understanding men living with this condition as more than just a homogenous, androgynous population, and instead as individuals who maintain (or seek to) their multiple masculinities throughout their experiences of dementia. As such, only through using ecopsychosocial initiatives that cater for these gendered experiences of dementia can we hope to bring about true social inclusion for this hard-to-reach population.

Having presented at the ADI conference in 2013, when I was just starting out on my PhD journey, this opportunity made for a fitting conclusion to what has been an enjoyable(ish) and intellectually rewarding four years of study. I was surprised and heartened to witness that over these past four years, the global understanding of dementia has begun to shift. Unlike in 2013, this most recent conference sought to re-position dementia as a disability and was focussed on the Human Rights and (Social) Citizenship of people living with the condition. It placed more emphasis on the societal changes (rather than the individual) that must be undertaken to enable the social inclusion of people with dementia within communities that are both physically and conceptually ‘dementia-friendly.’ It also highlighted the important role of inclusive research approaches that value the voices of people with dementia as ‘experts by experience’ and position them as ‘active social agents’ rather than passive recipients of care.

With a cure for dementia still a distant realisation, it is essential that these academic messages are successfully translated into ‘on-the-ground’ practice; thereby ensuring the well-being of those living with the condition through the language used to speak about them and the support offered to them. As I continue my employment at BU, post-PhD, these will be my guiding principles as I seek to undertake applied research that promotes these important messages and work alongside people with dementia as co-collaborators to bring about this much needed social change.