Congratulations to Dr. Rachel Arnold on the publication of her fourth PhD paper.  Today the Journal of Asian Midwives informed us that the paper ‘Hidden Relationships: Perspectives on Leadership and Management in Afghan Maternity Services – An Ethnographic Exploration‘ has been published today [1].  Earlier papers have been published in BJOG, Social Science & Medicine as well as BMC Pregnancy & Childbirth [2-4].  The paper discusses the improvement of the quality of healthcare, particularly in low-income countries, which often focuses on the performance of healthcare providers and the availability, acceptability, and uptake of services. The role that health service leaders play in facilitating effective care has received less attention in the literature. This ethnographic study explored the perspectives of Afghan maternity care providers, managers and other stakeholders on leadership and the provision of quality maternity care. 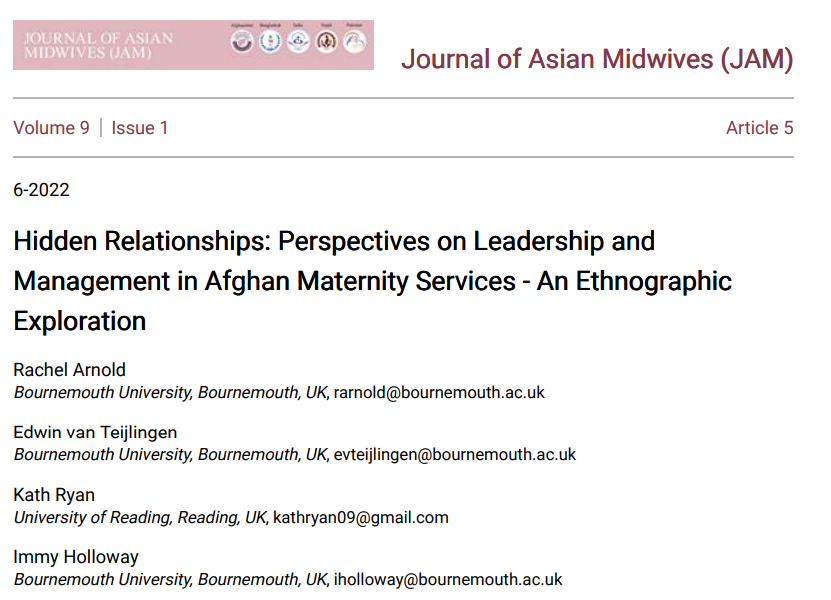 The results of this study involves 1. Healthcare providers who described their managers as both autocratic and weak. They explained that their managers failed to enforce standards or listen to their concerns. 2. Managers who felt powerless to improve
care because the government did not support their initiatives to reform the working environment or discipline staff members who were flouting the rules. BU professor Edwin van Teijlingen from the Centre for Midwifery, Maternal & Perianal Health (CMMPH) had the honour of being invited to speak at a workshop ran yesterday by the Sheffield Institute for International Development.  The workshop ‘Nepal: Reconstruction, Resilience and Development’ was organised by the University of Sheffield.

Prof. Edwin van Teijlingen spoke about endemic corruption in Nepal and opportunities that are offered by disasters such as earthquakes for more corruption.  He pointed out that there is little research on corruption in Nepal, despite its low ranking on the international Corruption Perceptions Index. The presentation can be viewed here: Nepal earthquake corruption 2017 . He pointed out that disasters are confusing events with often loads of money and relief aid arriving under chaotic conditions.  Immediate emergency aid needs to be distributed to unknown people (‘those affected’), in difficult to access areas, under often chaotic socio-political conditions.

He also reminded the audience that corruption (and corrupt behaviour) are not limited to low-income countries.  He highlighted the Ariana Grande case in Manchester (UK) where thousands falsely claimed to have been at the original attacked concert when applying for a ticket for the Manchester One Love concert. The Directorate-General for Home Affairs invites proposals for the provision of technical assistance and support for establishing and coordinating a network of local research correspondents on corruption. The tenderer will coordinate the collection and processing of up-to-date, objective and reliable relevant information within the network and the analyses regarding the state of play of anti-corruption policies in EU member states. Funding is worth approximately €4 million over 48 months. For more info see their website.