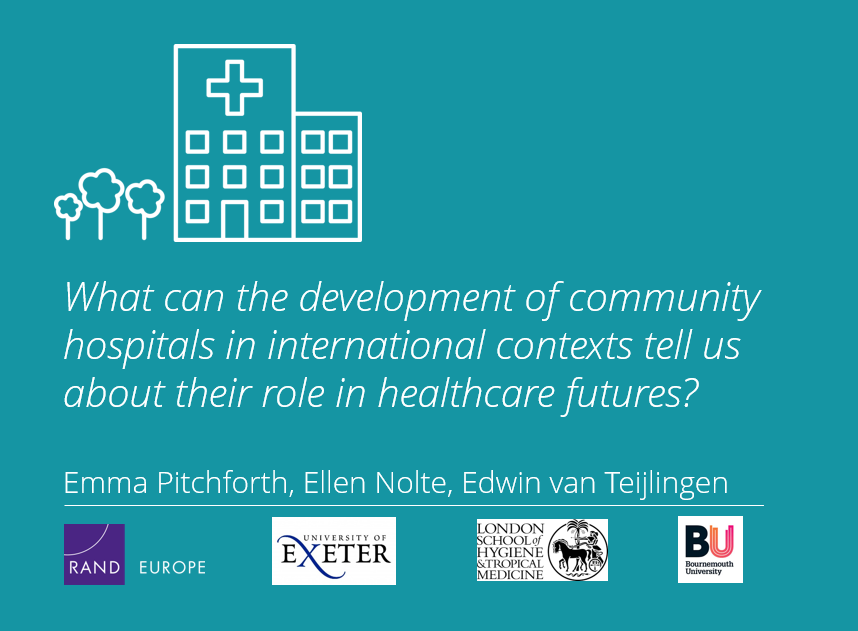 BU Visiting Faculty Dr. Emma Pitchforth (Senior Lecturer in Primary Care, University of Exeter) spoke this week at International insights: What can the development of community hospitals in international contexts tell us about their role in healthcare futures?, the first of three UK Community Hospital online seminars.  Emma presented our NIHR study on Community Hospitals [1-3].

The notion of a Community Hospital in the UK is evolving from the traditional model of a local hospital staffed by general practitioners and nurses and serving mainly rural populations. Along with the diversification of models, there is a renewed policy interest in community hospitals and their potential to deliver integrated care. However, there is a need to better understand the role of different models of community hospitals within the wider health economy and an opportunity to learn from experiences of other countries to inform this potential. 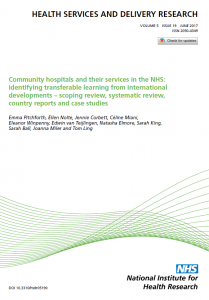 There will be two further webinars at lunch time on the 12th and 19th November.  You can register using the following link: https://bham-ac-uk.zoom.us/webinar/register/WN_dX8LwdHxQX2-Mf8nlt8nwg .

Congratulations to Dr. Rachel Arnold in the Centre for Midwifery, Maternal & Perinatal Health who had her first paper accepted since she started working at BU two months ago. Her paper ‘Villains or victims? An ethnography of Afghan maternity staff and the challenge of high quality respectful care’ is co-authored with her former PhD supervisors Professor Kath Ryan (BU Visiting Faculy), Professor Emerita Immy Holloway and CMMPH’s Professor Edwin van Teijlingen [1].  The paper is Open Access funded by Bournemouth University’s Open Access Fund which will help promote the visibility of the paper before REF 2021.

I was tempted to head this blog ‘Dr. Arnold only two months at BU and first paper published’, but I decide this would perhaps send the wrong message to other new BU staff.  Rachel completed her PhD in CMMPH and this is paper is the third publication from her thesis.  The other academic publications by Dr. Arnold on Afghanistan have been in BJOG and Social Science & Medicine [2-3].

This paper focuses on the perspectives of Afghan healthcare providers on their roles, experiences, values and motivations, and the impact this has on the quality of care for perinatal women and their newborn babies.  To understand their perspectives , the researchers undertook a six-week observation – including interviews and focus groups – to analyse the culture of a maternity hospital in Kabul, Afghanistan.

This research study offers multiple insights into Afghan healthcare provider behaviour and reveals complex interrelated issues that affect care in this setting.  It is one of few international studies that explore care from the perspective of healthcare providers in their cultural and social environment.  It reveals that understanding the context of healthcare is crucial to understanding behaviour and the underlying problems to quality of care.

Our report concluded that community hospitals could play a more active role in meeting the challenges facing the NHS, in particular in larger hospitals. The notion of a Community Hospital in the UK is evolving from the traditional model of a local hospital staffed by general practitioners and nurses and serving mainly rural populations. Along with the diversification of models, there is a renewed policy interest in Community Hospitals and their potential to improve integrated care. However, there is a need to better understand the role of different models of Community Hospitals within the wider health economy and an opportunity to learn from experiences of other countries to inform this potential.

The Health Services Journal published a commentary this week on Community Hospitals [1].  This online article is written by Dr. Emma Pitchforth who is based at RAND Europe in Cambridge (& BU Visiting Faculty), Prof. Edwin van Teijlingen (Faculty of Health & Social Sciences) and Dr. Ellen Nolte based at the European Observatory on Health Systems and Policies. The authors highlight the recently completed NIHR study on Community Hospitals [2].  The notion of a Community Hospital in the UK is evolving from the traditional model of a local hospital staffed by general practitioners and nurses and serving mainly rural populations. Along with the diversification of models, there is a renewed policy interest in community hospitals and their potential to deliver integrated care. However, there is a need to better understand the role of different models of community hospitals within the wider health economy and an opportunity to learn from experiences of other countries to inform this potential.

Last year the research team had already published a scoping review article from the NIHR study [3].

Prisoners eat better than hospital patients in Britain. Our research found that prisoners consume around three times more calories than patients and their diet is more in line with government nutritional recommendations.

Eating more isn’t always healthier, but when you consider that malnutrition is a big problem in hospitals, it can be. We found that the average male hospital patient consumes just 1,184 calories a day – even though the NHS recommends 2,500. Male prisoners, however, consume an average of 3,042 calories. The situation is similar for women. Female patients consume on average 1,134 calories (the recommended amount is 1,940). But female prisoners consume 3,007 calories, on average.

Malnourished patients have a weakened immune system, delayed wound healing and muscle wasting. There are also psychological effects from malnutrition including apathy and depression leading to loss of morale and the will to recover. Studies have also shown that inadequate nutrition can lengthen patients’ hospital stays by 50% (an average of six days) and triple mortality rates.

Hospitals face a number of difficulties in providing high-quality food. Dishes are prepared on a tight budget. They are cooked at a central hospital kitchen and often have to travel a considerable distance to the wards. But prison food is also prepared on a tight budget and often has to travel considerable distances from the kitchen to the prison wing.

During our four-year study, we visited four prisons for men and two for women. In each, we carefully noted how food was prepared, delivered to the prison wing and served to the prisoners. We analysed the menu and interviewed prisoners and catering staff. We conducted four hospital studies with a similar method of data collection, which helped us to assess and compare the dietary intakes of hospital patients and prisoners. Through this we were able to identify the main differences in catering.

In hospitals, kitchen staff prepare the meals and hand them to porters who complete the delivery when they have time, between doing other tasks. Once the food reaches the ward, the responsibility for serving the food is handed to nurses. The various teams have to cooperate to ensure that food is delivered while it’s still fresh. However, providing food is not the main priority of a hospital. We noted tension between catering staff, who cared about food quality, and medical staff, who didn’t consider it a priority.

We found that the food prepared by hospital and prison kitchens – although not fine dining – has a similar nutritional quality and is presented in a similar manner. (Typical fare might include meat and two veg, a pudding or yogurt, and a piece of fruit.) In prison, food was transported quickly and food quality was maintained up to the point of service to the prisoners. The food arrived hot, comparatively fresh and could be consumed immediately without distractions. By contrast, hospital food was delayed between kitchen and patient.

In the hospitals that we studied, getting food from the kitchen to the patient was a fragmented and badly coordinated process. Meals were often delayed and disrupted by medical ward rounds, tests and treatments.

The result of these delays? Food was left for too long in warming trolleys prior to being served. Hot food cools down and cold food warms up to the temperature of the ward. Food dries out and discolours. Meat curls and gravy congeals. Compared with prisons, the temperature, texture and appearance of food were all worse in hospitals by the time the food was served. Nutrients may also have diminished and the food became less palatable. Differences that are likely to account, at least in part, for the marked difference in intake between prisoners and patients.

But this is not inevitable. Delays could be reduced. Hospitals could adopt a more coordinated approach and have a dedicated team responsible for the preparation, delivery to the ward and service to the patient. The team responsible for catering would not have the conflicting priorities that clinical teams have. Although a few hospitals do have a dedicated catering team that delivers food directly to the patient, this is the exception, not the rule.

In many hospitals, nutrition is often an afterthought. Priority is given to medical tests and treatments and often ignores the role that food plays in improving the patient’s health. One governor told us that if meals were delayed or missed in prison there would be a riot.

This is a reminder that the BUDI Open Public meeting is tomorrow (14 May) there are still a few spaces available.

To book your free place please go to eventbrite http://www.eventbrite.co.uk/e/budi-open-meeting-dementia-friendly-care-environments-tickets-9876528964