Congratulations to Dr. Luisa Cescutti-Butler and Prof. Sue Way in the Centre for Midwifery, Maternal & Perinatal Health (CMMPH) on the publication of their latest research article.  This new paper called ‘The experience of student midwives being taught newborn infant physical examination (NIPE) as an extracurricular activity at a university in the UK: A descriptive survey study’ has been accepted by Nurse Education in Practice [1].  The paper went online pre-publication earlier this week. 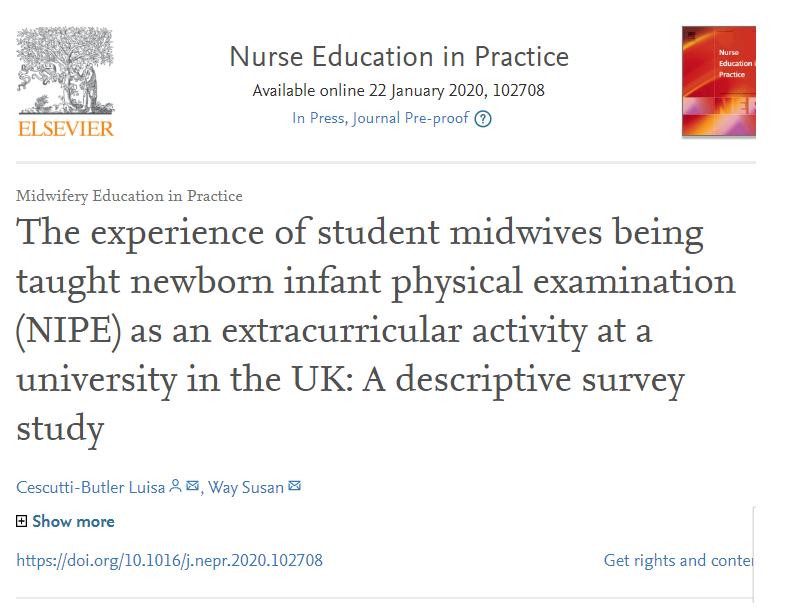 It’s our last update until the New Year – we give you the Queen’s speech (not that one, the one at the State opening) and the OfS annual review, to get you ready for what will be coming in the New Year. At the time of writing MPs are expected to pass the second reading of the EU Withdrawal Agreement Bill, paving the way for the more detailed third reading stage in January.

Happy Christmas and a happy new year to all our readers, and thank you for your patience in what has been a very interesting year!

You can read the Queen’s Speech here along with the PM’s introduction and briefing notes about all the legislation etc. The Executive Summary in this briefing document sets out the legislative programme clearly.

This Queen’s Speech will deliver Brexit on 31 January and allow the Government to deliver on people’s priorities and unleash the country’s potential. The Government’s first priority is to deliver Brexit on 31 January and to negotiate an ambitious free trade agreement with the EU that benefits the whole country This Queen’s Speech sets out how we will seize the opportunities created by Brexit:

You will remember that “The Home Secretary has commissioned the Migration Advisory Committee (the MAC) to consider points-based systems, including the Australian immigration system and other international comparators. The MAC is due to report in January 2020.”

And this from the more detailed briefing:

Our new single system will allocate points on a range of criteria in three broad categories and it will be focused on skills and talents, not nationality:

Although it isn’t mentioned in the briefing, this was the October 2019 briefing on graduate employment rights

The Speech sets out a number of proposals to invest in and support our public services:

This is from the more detailed briefing on education

The Speech sets out a variety of measures to support workers and families:

The Speech reaffirms our commitment to strengthening the criminal justice system, ensuring it keeps people safe:

The Speech sets out how we will improve our infrastructure and level up opportunity across the country:

To build on our world-leading excellence in science and deliver solutions to some of the world’s greatest challenges we are:

This Queen’s Speech deepens our commitment to safeguarding the natural environment for future generations:

The Government will continue to work to strengthen the bonds between the different parts of the UK and to safeguard its constitution and democratic processes:

The Speech confirms our determination to celebrate and support the work of our courageous armed forces and to retain and enhance the UK’s global status and reach as we leave the EU:

We have mentioned the government’s promises on research funding above. Wonkhe have done some analysis

The Office for Students have issued an annual review which defends their approach to date and sets out some continuing and  new frontiers for intervention in the sector. The headline lets you know what is coming: England’s universities world class, but pockets of poor provision letting students down.

Before we get stuck into the detail, there is some analysis of this and the OfS board papers from Wonkhe – Jim Dickinson on plans for student protection:

So back to the Review.  Nicola Dandridge says:

The blog summarises the areas of focus:

In the main document, there are some interesting points:

And the process has not been without challenges:

And what does the future hold:

From Wonkhe: The Home Office has published statistics on individuals referred to and supported through the Prevent programme for April 2018 to March 2019. Of 1,887 cases reported by the education sector (the largest single sector in terms of referrals), only 324 linked explicitly to Islamic extremism – 530 cases specified right wing extremism. David Kernohan asks if we should be thinking again.

Nursing bursaries are back

In an announcement trailed in the Conservative manifesto the government has confirmed the reintroduction of maintenance support for nursing (and other healthcare) under=graduates, with more details to follow in the New Year.

Students will receive at least £5,000 a year, with up to £3,000 further funding available for eligible students, including for:

This means that some students could be eligible for up to £8,000 per year, with everyone getting at least £5,000. The funding will be available from next year. Further details on who can access the support will be available in early 2020.

The funding will not have to be repaid by recipients. Students will also be able to continue to access funding for tuition and maintenance loans from the Student Loans Company.

What about the Youthquake?

The day of the election, twitter was full of pictures of long queues of students at University polling stations waiting to vote. Students were encouraged by the Labour party to vote tactically.  HEPI have a blog about the impact and David Kernohan of Wonkhe did some more intensive analysis.

UCAS issued more data about the 2019 admissions cycle. There were headlines about unconditional offers (they went up) with some faux outrage associated with it (the bit Ministerial assault on conditional unconditionals came too late for any institution to change its policy for 2019.

From the UCAS reports – main report