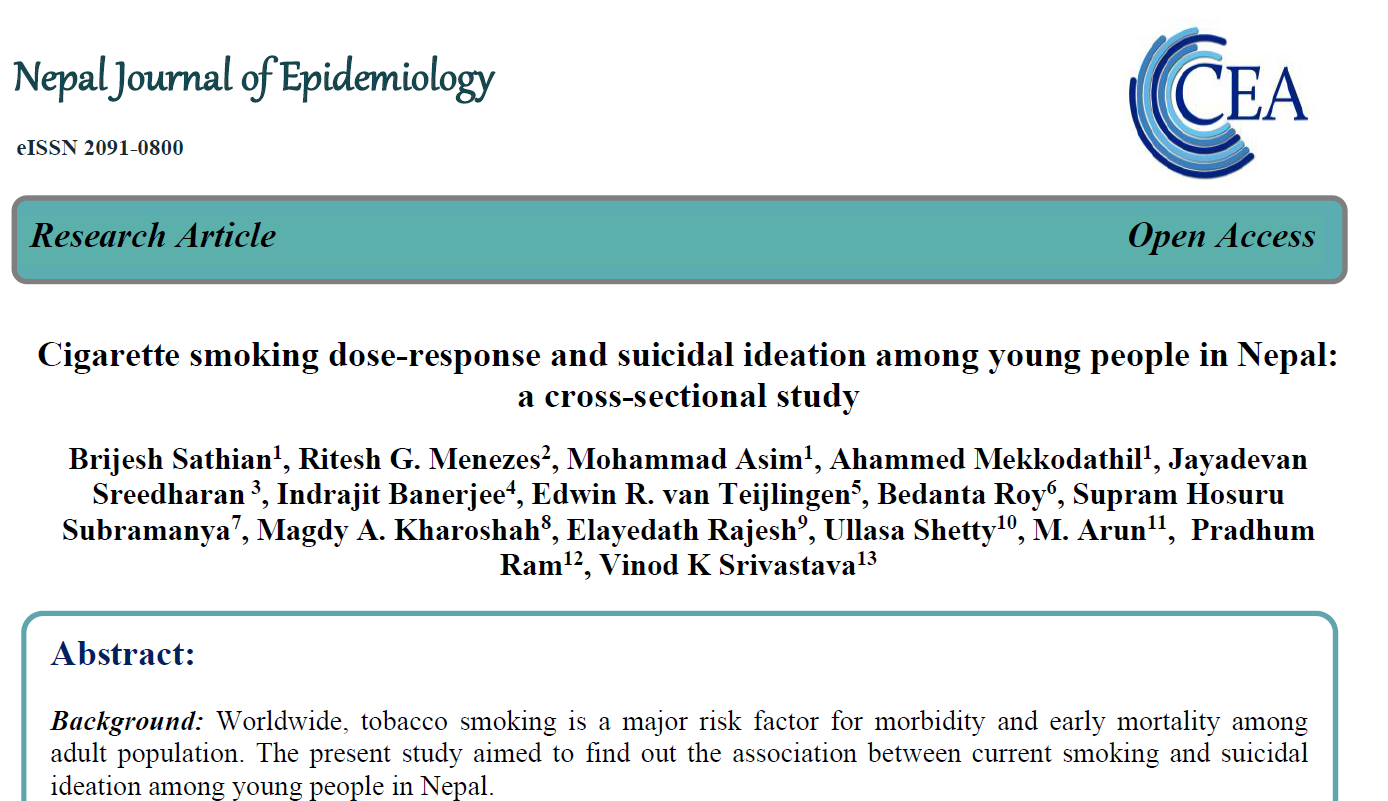 Published earlier this week in the Nepal Journal of Epidemiology a BU co-authored paper on ‘Cigarette smoking dose-response and suicidal ideation among young people in Nepal: a cross-sectional study’ [1].   The authors conducted a cross-sectional questionnaire-based survey with 452 young people in Nepal’s second largest city Pokhara.  The study matched participants by age and smoking status. The mean age was 21.6 years and 58.8% were males. The overall rate of suicidal ideation in our cohort was 8.9%. Smokers were slightly more likely to report suicidal ideation than non-smokers (aOR 1.12). The risk of developing suicidal ideation was 3.56 (95% CI 1.26-10.09) times more in individuals who smoked greater than 3.5 cigarettes per week (p=0.01). 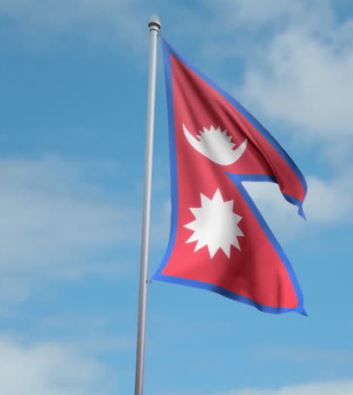 The paper concludes that the rate of suicidal ideation was slightly higher among smokers and a dose-response relationship  existed linked with the number of cigarettes smoked per week. Being aware of the link between smoking and
suicidal ideation may help health care professionals working with young people to address more effectively the issues of mental well-being and thoughts about suicide.  The Nepal Journal of Epidemiology is an Open Access journal hence this public health  paper is freely available to readers across the globe.

FMC Principal Academic, Dr. Ann Luce was invited, along with Prof. Debbie Holley, HSS, to share their respective  research during a series of seminars and workshops at the University of Salento, Italy.

As part of of the exchange is building capacity, Dr. Luce was invited to promote her new book and share  her significant body of work on suicide and its reporting in the media. Italian sociologists, Prof. Ferdinando Spina and Prof. Marta Vignola invited Dr. Luce to deliver a research symposium to Masters of Sociology students, so they could better understand the role of the media in suicide representations and framing for society at large.

While there, Dr. Luce was interviewed about her new “Responsible Suicide Reporting” model. The podcast is available in both English and Italian.

Dr. Luce was able to spend some time with the Director of the Department of History, Society and Human Studies, Professore Ordinario di Geografia Economico-Politica, Fabio Pollice, and presented him with her newly published book, “Ethical Reporting of Sensitive Topics”

Dr. Luce worked extensively with our host, Prof. Enrico Ciavolino, an expert psychometric statistician, who was able to offer advice to Dr. Luce about new methods of interrogating data from social media sites, in collaboration with Prof. Ferdinando Spina, an esteemed sociologist studying criminology and media.

The article “Why suicide rate among pregnant women in Nepal is rising” written by BU academics was published in The Conversation last year.  At the time this attracted Indian newspaper attention.  Clearly it is still a relevant issue as it attracted national coverage in a Nepali newspaper this week. Last week Sacha Gardener reported on this BU Research Blog on the publication of our most recent article ‘Why suicide rates among pregnant women in Nepal are rising’ in The Conversation.  Since then we have been informed that this piece was reproduced in two Indian independent online newspapers, last week in The Wire and today in Scroll.in (India’s leading independent source of news, analysis and culture).   Scroll.in used the heading ‘A project is training midwives in Nepal to stem rising suicides of pregnant women’, whilst The Wire used the title ‘Why Suicide Rates Among Pregnant Women in Nepal Are on the Rise’.  Suicide in pregnant women and soon after birth is an important issue in both Nepal and India.  Just for completeness the original article, written by BU’s Visiting Faculty Dr. Bibha Simkhada and Prof. Edwin van Teijlingen based in BU’s Centre for Midwifery, Maternal and Perinatal health (CMMPH), can be found here! Huge numbers of pregnant women and new mothers are taking their own lives in Nepal as they deal with extreme poverty, natural disasters, domestic violence and oppression. Research shows suicide represents 16% of all deaths in women of reproductive age. The rate is higher than previously recorded and there has been a considerable increase over the past few years. But a new project which trained midwives about mental health issues might hold the key to turning this around.

Suicide is primarily associated with unwanted pregnancy or the feeling of being trapped in poverty or situations of sexual and physical abuse. A study of 202 pregnant women (carried out between September and December 2014) found that 91% of them experienced some kind of physical, emotional or sexual abuse – mostly at the hands of their husbands and/or mother-in-laws.

The sad fact is that almost 40% of suicides in the world occur in South-East Asia. And one in three pregnant woman and new mothers are taking their own lives in low-income countries. In Nepal, 21% of the suicides among women aged 15-49 were in girls under 18 due to violence and being powerless in their families and communities.

In Nepal, making decisions about seeking maternity care is not in the hands of the pregnant woman but usually lies with her mother-in-law or husband. When young women marry they move in with their husbands’ family and their lives are ruled by their in-laws. These women often have little say in seeking health care during pregnancy, childbirth and the postnatal period.

In many poor families, husbands migrate for work leaving their young wives with family. Nepal has a real migrant workers economy with close to 50% of Nepalis relying on financial help from relatives abroad. Mental health problems can worsen for women who have been taken away from their own families. In other cases, young women face domestic violence due to their husbands’ drinking leading to mental health issues and suicide.

There is also a lack of understanding of pregnancy and childbirth-related mental health issues and husbands and mothers-in-law often fail to support these vulnerable young women. They in turn are reluctant to seek help due to the stigma associated with mental illness.

Cultural practices and social norms, like gender inequalities and early marriage, hinder women who have a lack of choice when it comes to their role as mothers. There is also a preference for sons rather than daughters, who are seen as an “economic burden” in many families. If a woman is expecting a daughter, especially for the second or third time, this can also trigger mental health issues.

Depression and anxiety are common and affect ten to 15 out of every 100 pregnant women in the country. Postnatal depression is often reported, but less attention is given to more common and less obvious mental health issues.

Recurrent earthquakes and floods exacerbate issues of depression and helplessness as women are forced to live in temporary shelters and have the burden of increased poverty.

For many rural Nepali women, the most qualified birth attendant they can expect to look after them is the Nepali Auxiliary Nurse Midwives (ANMs). But a study found that they received little or no formal training on perinatal mental health issues. Although there have been gradual improvements in health care for women during pregnancy, mental health support is leaving many women feeling that suicide is their only option.

As part of a Tropical Health and Education Trust project, funded by DFID, around 80 ANMs were trained on perinatal mental health issues. The project used UK-based volunteers in Nepal over two years.

The training helped raise awareness of mental health well-being and improved access to mental health care for pregnant women and new mothers. This is a vital first step towards improving community-based services for pregnant women in rural Nepal. But to offer hope to more young women there needs to be a significant increase in this type of training and awareness raising. Today, after months of delay, UK volunteers managed to deliver the first THET-funded training as part of the BU-led project ‘Mental Health Training for Community-based Maternity Providers in Nepal’.  The first serious delays occurred due to the devastating earthquake in April 2015 when we are just about to start our project.  Then more delays happened due to the political unrest in the country after the signing of the new Constitution of Nepal in September 2015.  Whilst there are still plenty of people living in make-shift shelters today in some of the more remote districts affected by the earthquake and there is still a serious shortage of petrol and cooking gas due to politically-driven blockages at the Indian-Nepali border, the situation is now safe enough to start bringing UK volunteers to Nepal. Today’s first training was delivered in Kathmandu to our friends and colleagues at MIDSON, the Midwifery Society of Nepal (the equivalent of the Royal College of Midwives in the UK).   Joining Prof. Edwin van Teijlingen to deliver the first training session to Nepali midwives is Dr. Bibha Simkhada from Liverpool John Moores University.  Bibha is a nurse in Wirral University Teaching Hospital NHS Foundation Trust as well as BU Visiting Faculty.  The audience at MIDSON was very helpful in giving feedback on the planned training in the southern district of Nawalparasi (starting Sunday 10th January).  The agreement is to run a one-day training session for ANMs (Auxiliary Nurse Midwives), and run this three day in a row for one-third of all the birthing centre staff from across the district.  This means that the government birthing centres can stay open with the other two-thirds on the staff on any one day.  Further detail on this BU-led THET project can be found in our recent academic article, which is available through Open Access: click here.

The latest BU research publication used a modelling approach to suicide in India [1].  The paper ‘Time Trend of the Suicide Incidence in India: a Statistical Modelling’ is now online and freely available as it was published in an Open Access journal.  The first author of this paper is BU Visiting Faculty Dr. Brijesh Sathian.  The modelling resulted in some useful predictions of future risk of suicide at a population level, see for example: 10.12691.ajphr-3-5A-17.fig_1