Congratulations to Prof. Sara Ashencaen Crabtree on the publication of her new Routledge research monograph, Women of Faith and the Quest for Spiritual Authenticity [1].    This new book is based on 59 interviews with women in Malaysia and the UK concerning their experiences, beliefs and practices across the faiths of Buddhism, Hinduism, Christianity, Islam, Judaism and diverse Pagan pathways. These accounts are often very personal and detailed in referring to both the micro (individual) and the macro (social) in terms of how faith and gender are negotiated in multicultural societies that struggle with the politics of diversity. 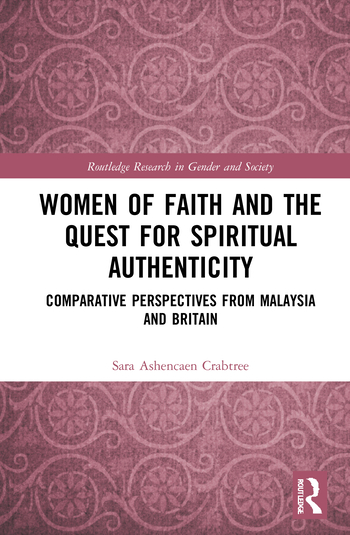 This is an ecumenical and entertaining ethnography where women’s narratives and life stories ground faith as embodied, personal, painful, vibrant, diverse, illuminating and shared. This book will of interest not only to academics and students of the sociology of religion, feminist and gender studies, politics, political science, ethnicity and Southeast Asian studies, but is equally accessible to the general reader broadly interested in faith and feminism.  Sara says that she road-tested some of these Sociology of Religion ideas in the classroom at Bournemouth University and she found that social science students really related to it in their discussions. 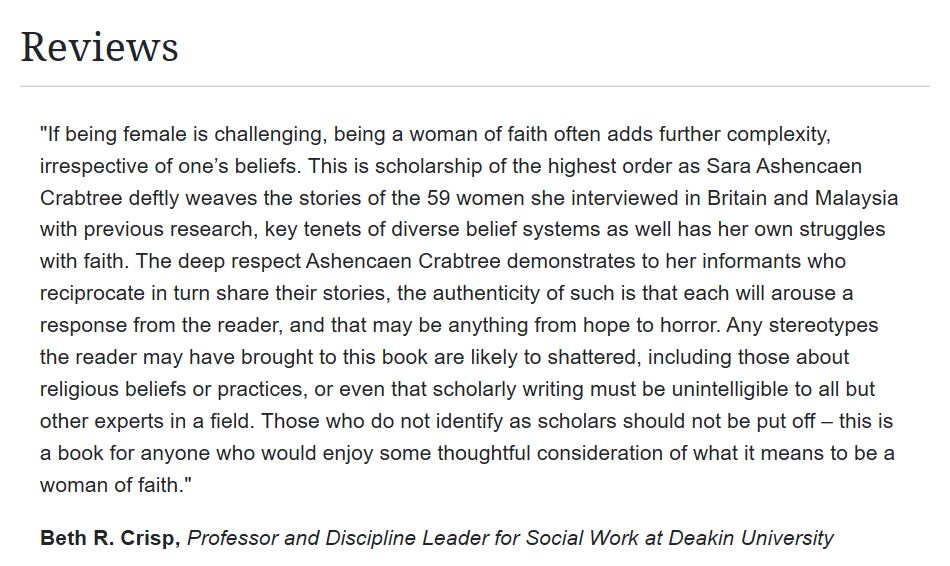 I have taken the liberty to reproduce one of the reviews written for the publisher’s website by Prof. Crisp from Deakin University in Australia.

Ashencaen Crabtree S (2021) Women of Faith and the Quest for Spiritual Authenticity: Comparative Perspectives from Malaysia and Britain, London: Routledge.

This week the Oxford Encyclopaedia published our contribution on religious organisations and health promotion [1].  The paper in question ‘Faith Communities and the Potential for Health Promotion’ is co-authored by scholars based in England, Scotland and Canada. This new publication is part of a growing number of publications at Bournemouth University on the contribution of faith communities to public health.

Faith communities often have multiple resources, existing networks and an infrastructure that can be applied to health promotion programmes for their own membership or as an outreach to the wider community. Health programmes in a faith community in high-income countries may include targeted initiatives, ranging from walking groups or weight checks, health events, or health assessments, to diabetes self-management. These activities can be organised by charities and NHS organisation and held at local churches, synagogues or mosques which is referred to as faith-placed health promotion.  If the health promotion is part of the ministry of the religious organisation it is referred to as faith-based health promotion. On top of this encyclopaedia entry, the Open Access journal African Health Sciences [Impact Factor 0.66] accepted our paper in the same field a few weeks ago.  This  paper ‘Influence of faith-based organisations on HIV prevention strategies in Africa: a systematic review’ formed part of the first author’s M.Sc. in Public Health [2]. Our previous papers reported on a study of faith-based and faith-placed health promotion in and around Dundee [3-4].

Get some of these interesting presentations in your diary now ‘Enhancing social life through global social research’:The social sciences at BU.  For details click here!

The ESRC website lists its Festival events for 2015 and amongst the interetsing events is a record number of BU events! The full list can be found on the ESRC webpages, click here!

This event aims to engage participants who attended a previous one-day ESRC Festival of Science event which took place in 2012 entitled, “Pathways to Impact: ageing, diversity, connectivity and community”.

Children will have the chance to take part in a creative mapping exercise using coastal artefacts and pictures to create their own sensory and emotional maps of the topic, starting with the question of ‘how does it make me feel to be here?’

Older people are increasingly at risk of falling victim to financial scams that target vulnerable people, including mass marketing fraud via post, telephone or email and doorstep fraud.

This event will give practitioners, agencies and members of the public, the opportunity to come together to learn more about the threats posed.

This event asked the question:

Creativity and dementia: making a connection

Bournemouth University Dementia Institute (BUDI) will bring dementia awareness to life through running creative activities including a performance from the BUDI Orchestra – made up of people affected by dementia and musicians – poetry and technology such as IPads and Nintendo Wii.

Copyright reform: the implications one year on

One year ago, in October 2014, the UK Government introduced major changes to the Copyright Law with the aim of promoting innovation and creativity. These included a range of exceptions and limitations benefiting users as well as educational and cultural institutions.

A group of researchers from Bournemouth University are researching the lived experience of students entering higher education from and in ‘non traditional’ contexts. By bringing together research, educational practice and students as research co-creators, a unique lens is created through which to observe the question.

Increasing fruit and vegetable intakes: Why? How? – Event 3

The 5-a-day campaign went global after a recommendation from the World Health Organisation that we should all be eating a least 400g of fruit and vegetables per day. Variations on this message are repeated in countries all across the world. But does the message cause more confusion than good?

The crisis of the Rohingya refugees fleeing Myanmar through perilous sea routes reminds us of our visit to Myanmar, as part of our Fusion Fund study leave last year, where we discussed the newly formed assistance centre in Penang, Malaysia, set up for such people, with our Southeast Asian colleagues. The city of Yangon, formerly Rangoon, in Myanmar is graced by the golden pagodas of the national religion, Buddhism, and is also where Christian churches of past colonial times and new ‘mega-churches’, and mosques stand within easy reach and visibility of one another. Seemingly, then, based on this rich and historical bricolage of spiritual phenomena, Myanmar is a jewel of multi-faith tolerance. Underneath this thin and brittle surface, however, boils a crucible of ethnic, religious and nationalist violence. Our ingrained Westernised hegemonic partiality, in which we are presented with images of Buddhism as symbolising peace, compassion and contemplation, in contrast with Islam as the font of world terror, is seriously challenged in the Myanmar context. We experienced religion here as a form of resistance in respect of the revivalist religiosity of Baptist Christian groups amongst the Chin tribes during our short visit, which was also a time of curfew and riot, although not one generated by these groups who found an outlet for their dissatisfaction in their ‘born again’ philosophies and the construction of a sense of belonging through ‘otherness’. At that time the curfew was ordered in parts of the country because of the increasing discord and physical violence between nationalist Buddhist groups, including (bizarrely to some maybe) Buddhist monks, and the minority Islamic peoples, the Rohingya, who, although officially robbed of citizenship status and therefore stateless, also claim autochthonous status in Myanmar.

Indigeneity, itself, is a much-contested concept, more so when we consider theories of human evolution or when we excavate the historical migratory patterns employed by human groups. Indigeneity offers a powerful discourse that has been applied by all sides of the political spectrum: the oppressed and disenfranchised, and also those who seek, by means of violent ethno-nationalism, to protect their state borders, or to impose a particular ideology which is put forward as legitimisation owing to the prerogatives of precedence.

The Buddhist majority exert the forces of ethno-nationalism as a means of purifying modern Myanmar from this Islamic group, a use of state religion to justify oppression and to forge a single state religion. What we witnessed last year in Myanmar and what is happening to the Rohingya currently represents an uglier face of our working analytical concept of ‘religion as resistance’, creating the overt challenge of supremacist politics.

We have seen some of the worst of humanity in dealing with the crisis of the Rohingya fleeing from Myanmar. With Thailand policing its physical borders more rigorously, the people have turned to people smugglers, traffickers and to the seas, in particular the dangerous waters of the Bay of Bengal and the Andaman Sea. We have witnessed Thailand, Malaysia and Indonesia’s attempt to remove the ‘problem’ from their national boundaries but also then adopting a more humanitarian response under international pressure, and we have witnessed the shock of individuals when the full horror of trafficking and death is revealed. Yet we have not seen the international community mobilise in support of the Rohingya people perhaps for some immediate reasons. Firstly, the Rohingya are Muslim, and a stereotype of contemporary terrorism as located in faith ideologies prevails. These prejudices may be strengthened further by Western applaud of the economic, rather than political, raising, of the formerly impenetrable bamboo curtain of Myanmar. Finally, Western eyes may view the state religion in Myanmar through lenses of prior assumption of Buddhism as fundamentally and prima facie incompatible with aggressive oppression of others.

The plight of the Rohingya echoes, to varying degrees, that of many other displaced or disenfranchised indigenous peoples: dislocation, diminishment of economic, political and religious rights, and the precariousness of marginal existence.  To exploit terms that the sociologist, Max Weber, coined, the United Nations Declaration of the Rights of Indigenous Peoples (UNDRIP) offers the rational-legal authority to battle their cause. However, there is also a need to call upon traditional authority to reinforce beleaguered identities and it is here that we see the contemporary development of religious resistance. This has its positive aspects in creating a sense of belonging, of purpose, of transcendence but it may also have a downside in creating active resistance not to oppression but to the rejected Other – and together forms another important plank in our exploration and theorisation. Our continuing work with the experiences and voices of indigenous peoples throughout Southeast Asia, MENA and now Central America will further develop this deeply intriguing concept of religion as resistance.