This beautiful image was created as the first part of the ‘Imagining the potential’ of change for rural life in Dorset resulting from a successful bid as a pilot area from central Government. 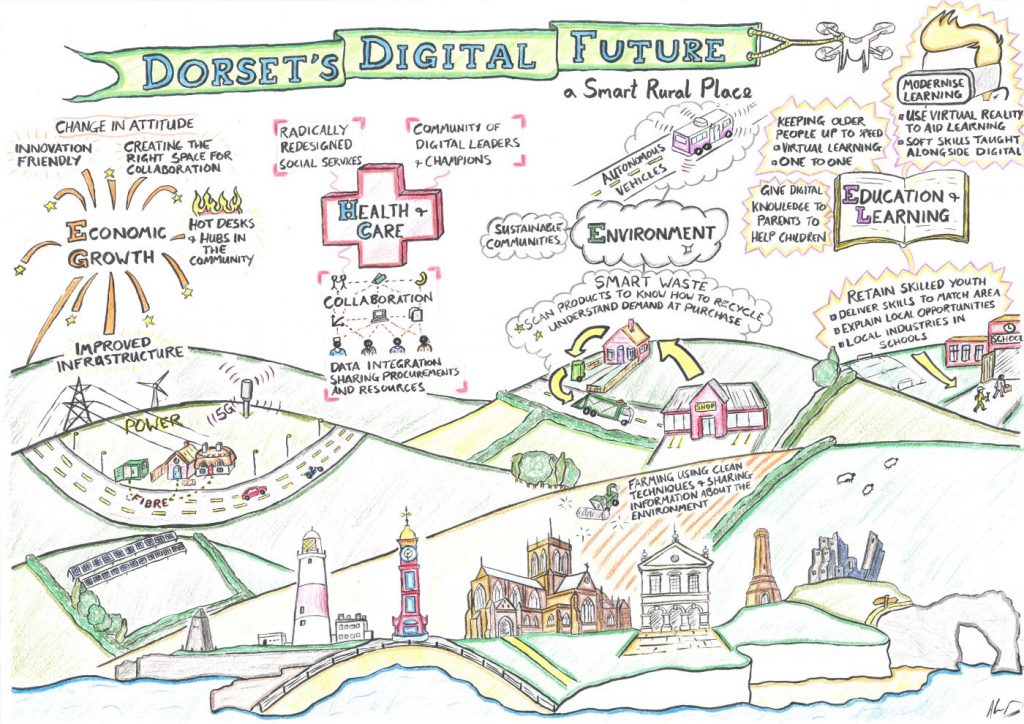 Visualisation of the transformative effect of 5G 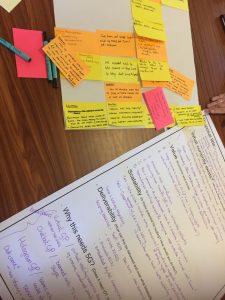 The project team heading the work have invited the public and experts to work together to scope out potential user cases along the four themes identified in the SMART Rural Dorset work. Professor Debbie Holley attended to represent HSS at the event exploring 5G in health, facilitated by Colin Wood and the Rural Connected Communities team at Dorset Council. At the event, there was an ideas generation exercise, followed by team working to map out user case scenarios showing the improvement and benefit 5G would offer rural Dorest in terms of enahncing access to health care.

More information, including a series of videos explaining what 5G is about are available on the project website

Congratulations to Bournemouth University’s Professor Colin Pritchard, Honorary Doctor of Science Anne Silk and their Southampton colleague Lars Hansen who recently published the paper ‘Are rises in Electro-Magnetic Field in the human environment, interacting with multiple environmental pollutions, the tripping point for increases in neurological deaths in the Western World?’  This paper in Medical Hypotheses (published by Elsevier) is a worrying analysis of the effects of (recent) technological progress on our health.  If this paper does not make you worry , at least remember one message: “No mobile phones in trouser pockets or under your pillow as you’re being bathed in 450Mhz.” Pritchard, C., Silk, A., Hansen, L. (2019) Are rises in Electro-Magnetic Field in the human environment, interacting with multiple environmental pollutions, the tripping point for increases in neurological deaths in the Western World? Medical Hypotheses 127: 76-83.

In December 2018 BBC World Service has broadcasted its new documentary titled “When you tire of tech”. The documentary is presented by Ana Matronic who explored dangers associated with tech addiction and what is done currently to minimise our over-reliance on tech.

The documentary features the interview with Dr Elvira Bolat, who comments on intimate relationships tech users have with their devices and social media. This interview is underpinned by various studies Dr Bolat has carried out to understand the usage of mobile tech and social media by consumers and businesses. It is also reflecting on the latest research discoveries around social media influencing and the dark side of relationships between social media leaders and followers – work co-authored with Dr Parisa Gilani and BA (Hons) Business Studies with Marketing graduate, Cladia Wilkin.

Do listen to the podcast and tune in to discover what Dr Bolat has said [12:35].

Summit on BME Leadership in HE

This event was hosted by AdvanceHE, the new agency that was formed recently to include the Leadership Foundation for Higher Education, the Higher Education Academy and the Equality Challenge Unit.

Wonkhe have pointed out that:

Baroness Valerie Amos spoke at this event on 16th May and also wrote in the Guardian. about leadership.

Also in the Guardian on Wednesday was an article by Shakira Martin, President of the NUS, who spoke at the same event.

UK research and Innovation have published its Strategic Prospectus which create a research and innovation system that is fit for the future and equipped to tackle the environmental, social and economic challenges of the 21st Century. As the press release outlines, the prospectus is the start of this process and over the next 12 months UKRI and its councils will continue to engage with their communities, the wider public, and undertake research, to further develop individual strategic delivery plans. Please see the following links for more information:

UKRI will work with its partners to push the frontiers of human knowledge, deliver economic prosperity, and create social and cultural impact. It describes four underpinning areas key to delivering this:

Over the coming months, UKRI will be conducting research and consultation to further develop its approach to working with others and to answer a series of big questions. These include how to grow the economy across different regions of the UK whilst continuing to expand our existing world-leading excellence; how to reduce the gap in productivity and the best approaches to developing talent across the diverse population of the UK, providing the skills needs of the future.

Vision: • We will push the frontiers of human knowledge and understanding. • We will deliver economic impact • We will create social and cultural impact by supporting society to become enriched, healthier, more resilient and sustainable.

From Dods, referring to an article in Politico: May intervenes to speed up new UK immigration plan.  The Government have purportedly brought forward plans to publish the Immigration White Paper before the summer recess. This new timetable, if accurate, means the White Paper will be published before the long-awaited Migration Advisory Committee’s report into the economics of immigration, due to be published in September. Formerly, Home Office officials had said this report would inform Government immigration policy, justifying the long delay in publishing the White Paper.

More definitely, the Commons Science and Technology Select Committee have announced a new inquiry into “an immigration system that works for science and innovation”.

The Committee will draw on the submissions to its previous Brexit inquiry and the sector’s submissions to the MAC to construct its proposals for the immigration system, but further input to this process is welcome on the following points:

The deadline for submissions is Wednesday 6 June 2018 – please contact policy@bournemouth.ac.uk if you would like to submit evidence to this inquiry.

The Secretary of State for Education has written to the Chair of the Education Committee about the HE review:

I presented this week on engaging with policy makers, part of a regular series of workshops that we run at BU for academic and professional support staff.  Read my blog here.

And while we’re talking about the “what”…did you know that government departments publish their areas of research interest?  This is a guide to where research funds might go, and is useful if you are thinking about policy impact. The collection is here, and four new ones were added on Thursday:

The DCMS one says “It is designed to encourage researchers and academics to explore those topics that could be of benefit to DCMS and our sectors and act as a starting point for future collaboration.”

The government have published the annual report from the Bioscience and health technology sector database for 2017 – there are some interesting graphics and context for the strategic investment areas:

There is scope for an argument about focus on place for the industrial strategy here – the detailed maps in the main report  highlight the weakness in the South West but opportunity for Bournemouth given our location almost in the South East and close to London.

And out on Monday, this report from the National Centre for Universities and Business:

Between January and April 2017 final year undergraduates on first degree courses were invited to answer the survey about their intentions after graduation. Overall, nearly 83,000 final year students from 268 UK higher education providers that take part in the National Student Survey (NSS) responded to the Intentions After Graduation Survey. This analysis focuses on almost 70,000 students at 238 English providers.

While the students’ most frequent intention within six months from graduation is to ‘look for a job’ (around 50 per cent of respondents each year), there is a clear upward trend in the percentage of students who intend to undertake postgraduate (PG) study. Among 2016-17 respondents, more than one student out of five selected ‘further study’ as their intention after graduation.

For all students, the intention to continue studying becomes greater further in the future (i.e. more than six months after graduation). Of students who are certain or likely to study at PG level in the future, 55 per cent intend to look for a job or have already been offered a job when surveyed.

The Office for Students is recruiting for its committees – provider risk, quality assessment and risk and audit.

Care leavers will be boosted by a new £1,000 bursary payment if they choose to do an apprenticeship from August 2018, the Government announced on 17 May

Are you working with an SME on a digital health project?  Innovate UK have announced funding opportunities related to Digital Health. Feasibility projects funding is between £50-£75k for a one year project.  Industrial research and developmental project have funds available for £500k-£1m for projects lasting up to three years and work with at least one other partner.  All projects must start by February 1st 2018.  Projects must have the potential to achieve at least one of the following:

Please note, all projects must be led by a UK business.  For further details, please go here.

Following our Industrial Strategy update last week, as expected Sir John Bell has published his report for the government on Life Sciences and the Industrial Strategy. There are 7 main recommendations under 4 themes, which are summarised below.

Health Advanced Research Programme (HARP) proposal – with the goal to create 2-3 entirely new industries over the next 10 years.

Growth and infrastructure – the goal is to create four UK companies valued at >£20 billion market cap in the next ten years.

NHS collaboration – the Accelerated Access Review should be adopted with national routes to market streamlined and clarified, including for digital products. There are two stated goals:

The recommended actions are

We will be holding a CHIRP meeting on Thursday 30th October at 1pm in P403 for anyone who may be currently conducting (or interested in conducting) research studies related to digital health.

The aims of these CHIRP meetings are to meet regularly as a group with common interests so that we can stay updated about current research/current technologies etc., potentially find areas of common interest for collaboration and generally bounce ideas around one another. We are currently working on pulling together a BU CHIRP/Digital Health research webpage and aim to share our first version with colleagues at the meeting as well as update current/planned projects and past/upcoming events of interest.

Please contact Sarah on swilliams@bournemouth.ac.uk if you would like to join our CHIRP group or would like to come along and find out more at our meeting on the 30th.