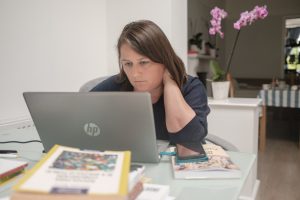 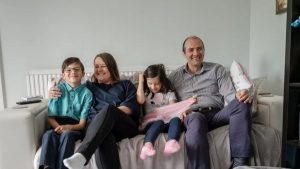 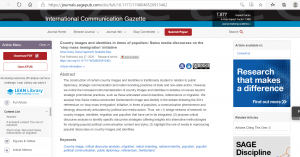 Dr Elvira Bolat, Dr Parisa Gilani, Samreen Ashraf and Dr Nasiru Taura from the Faculty of Management will be hosting an event entitled ‘Influencers for Good as part of the ESRC Festival of Social Science on the 8th November 6-8pm at South Coast Roast, Bournemouth. We’ll be drawing upon our research to discuss responsibility, how to understand your own behaviour and identity, and the power dynamics between influencers and followers. Importantly – we’ll be discussing how influencers can make the world a better place. The event is free to attend but registration is required via

We hope to see you there!

Faculty of Media and Communication

A Conflict, Rule of Law and Society

To what extent can theories or models that have been developed by literary and film theorists inform legal knowledge? Can any such literary and film models offer any serious insights to legal epistemology or are such ‘borrowings’ likely to remain at best rather superficial? The purpose of this contribution is to suggest that there are a number of theories – or at least models – that can prove quite fruitful for lawyers. Three, in particular, will be examined: namely personification theory, representation theory and reception theory. Personification theory is concerned with the notion of persona in cinema, theatre and literature and reflects, in particular, on the relevance of identity in films like Vertigo (1958) and Phoenix (2014). Persona, of course, is both a literary and a legal concept and so there is, however tenuous, a direct conceptual connection. Representation theory (see Bacon extract overleaf) has already had some impact on law – it can be seen as an aspect of fiction theory (see Vaihinger) – and this impact might be revived with the publication of a recent work by Professor Mathieu. Reception theory (see Dzialo overleaf) is more closely associated with hermeneutics which of course as a scheme of intelligibility has attracted much attention from jurists. Nevertheless the categories of text developed by Stagier have, perhaps, a particular reference for the jurist: what is the relationship between legal texts and their readers and does this relationship vary according to the nature of the text in question? One further point will be developed with respect to these theories or models mentioned. Perhaps labelling them as ‘theories’ or ‘methods’ is unhelpful; a more fruitful label might be one mentioned by Bouriau in his examination of Vaihinger’s ‘as if’ (comme si) fiction theory. It is not so much a theory; it is more of an ‘epistemological attitude’ (attitude épistémique).

Geoffrey Samuel Born in 1947 in England, Geoffrey Samuel is currently a Professor of Law at the University of Kent and a Professor affilié at the École de droit, Sciences Po, Paris. He received his legal education at the University of Cambridge and holds doctoral degrees from the Universities of Cambridge, Maastricht and Nancy 2 (honoris causa). He has also held many visiting posts in France, Belgium and Switzerland and is still a visiting professor in Rome (Tor Vergata), Fribourg and Aix-en-Provence. Geoffrey Samuel is the author of many books on contract, tort, remedies, legal reasoning and legal epistemology, the most recent being An Introduction to Comparative Law Theory and Method (Hart, 2014) and A Short Introduction to Judging and to Legal Reasoning (Edward Elgar, 2016). His areas of specialisation are the law of obligations, comparative law and legal reasoning.

All are welcome and we look forward to seeing you there!

Centre for the Study of Journalism, Culture and Community (JRG and NRG)

Conflict, Rule of Law and Society

Centre for Film and Television Last week Ben Hicks and Shanti Shanker from BUDI and the Psychology Department hosted a series of Graffiti workshops for people with dementia and their care partners. The workshops were led by an experienced Graffiti Artist from Graff Inc. who worked with the participants to develop an individual ‘tag’ and piece of street art that represented their sense of identity.

The label of ‘dementia’ has the power to evoke fear and stigma and this can detrimentally impact on the identity of people living with the condition and those supporting them. The Graffiti workshops provided an empowering opportunity for people to express and reclaim a sense of ‘self’ as well as challenge negative preconceptions of Graffiti, such as who uses it and for what purpose. It shows that people with dementia still have a sense of identity that they can still identify with. The workshops were enjoyed by all those who attended.

The final pieces of street art that were created will be displayed at the Subway between ASDA and the Handelsbanken Building, below A35 (or St Paul’s Road), Bournemouth from 5th October. Please go and check them out! It appears that blasting aliens to smithereens, rescuing the princess for the 256th time or pretending you’re Lara Croft  may not be so bad after all. New research led by scientists at the University of Essex  in cooperation with colleagues in Germany and the United States, looked at why people find video games fun.

The study investigated the idea that many people enjoy playing videogames because it gives them the chance to ‘try on’ characteristics which they would like to have as their ideal self. ‘A game can be more fun when you get the chance to act and be like your ideal self,’ explains Dr Andy Przybylski, who led the study. ‘The attraction to playing videogames and what makes them fun is that it gives people the chance to think about a role they would ideally like to take and then get a chance to play that role.’ The research found that giving players the chance to adopt a new identity during a game and acting through that new identity – be it a different gender, hero, villain – made them feel better about themselves and less negative. In fact, the enjoyment element of the videogames seemed to be greater when there was the least overlap between someone’s actual self and their ideal self. The study involved hundreds of casual game players in the laboratory and studied nearly a thousand dedicated gamers who played everything from ‘The Sims’ and ‘Call of Duty’ to ‘World of Warcraft’. Players were asked how they felt after playing in relation to the attributes or characteristics of the persona they would ideally like to be.