Congratulations to BU’s interdisciplinary nutrition-behavioural sciences team that published the recent review “Barriers and Facilitators Associated with the Adoption of and Adherence to a Mediterranean Style Diet in Adults: A Systematic Review of Published Observational and Qualitative Studies” [1] in the journal Nutrients. 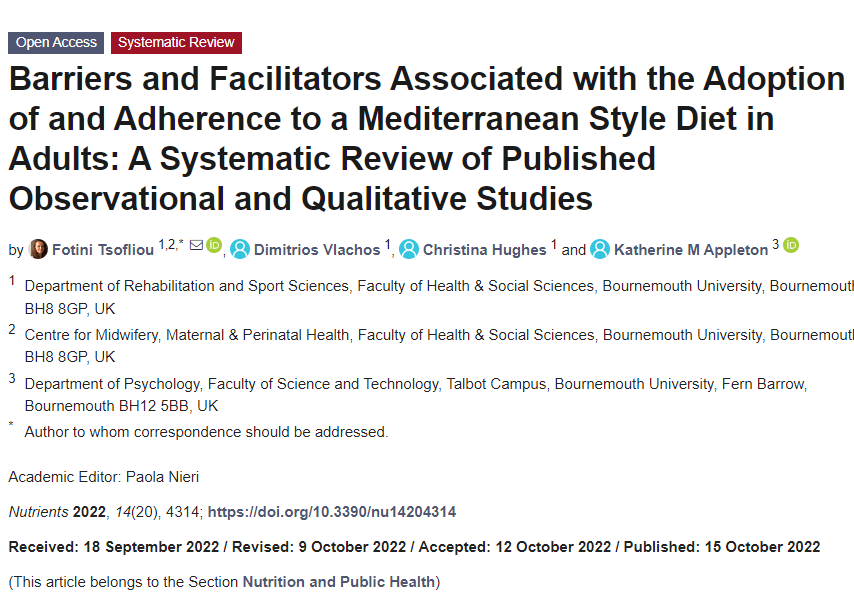 This review which is Open Access includes all studies investigating barriers or facilitators to adopting or adhering to a Mediterranean style diet in adults aged 18 years old and over.  The paper identified  financial, cognitive, socio-cultural, motivational, lifestyle, accessibility & availability, sensory and hedonic and demographic factors. Similar barriers and facilitators are often reported in relation to healthy eating or the consumption of specific healthy foods, with a few exceptions. These exceptions detailed concerns with specific components of the MedDiet; considerations due to culture and traditions, and concerns over a cooler climate. Suggestions for overcoming these barriers and facilitators specific to adoption and adherence to the Mediterranean diet are offered.

My name is Lars Marstaller and I joined BU as Senior Lecturer for “Technology for Behaviour Change” on the Academic Targeted Research Scheme in July 2020. The aim of my project is to develop a smartphone biofeedback app. 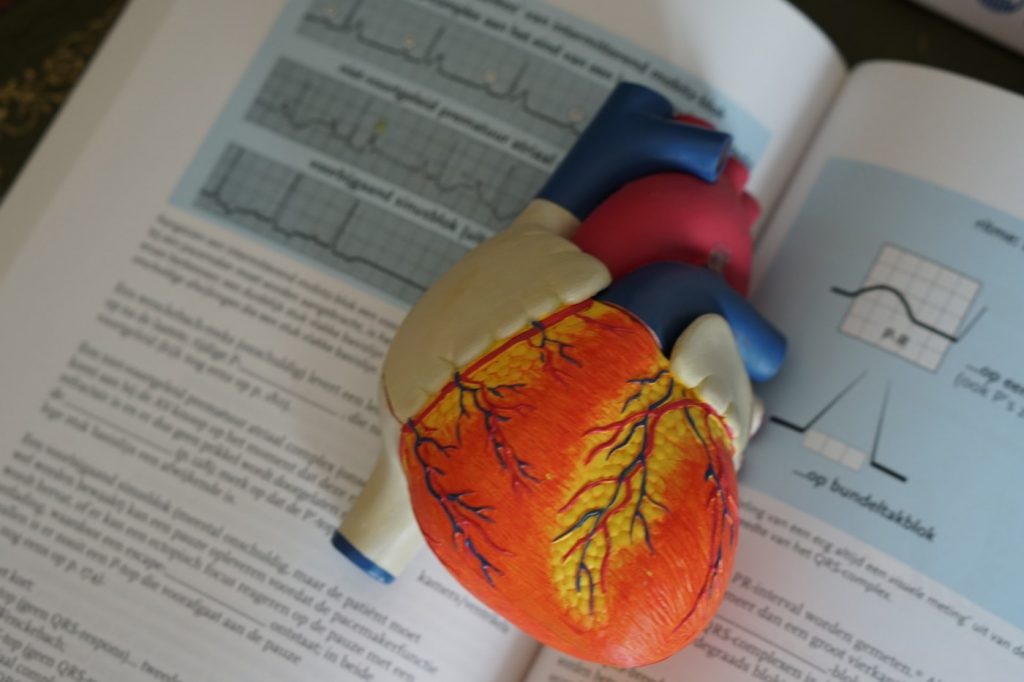 Biofeedback refers to technology that makes biological signals perceptually available that are otherwise hard or even impossible to perceive. Examples of such biological signals are heartbeats or brain waves. By making these biological signals available, the technology creates a feedback loop to the nervous system. The simplest model of such a feedback loop is the thermostat. The thermostat receives feedback by measuring the temperature in a room and then adjusts the heating up or down. This loop is then repeated until a pre-specified goal state is achieved and the room is nice and cozy. A similar loop is created through biofeedback. The important difference, however, is that biofeedback makes the user aware of the feedback signal. This way, the user can consciously try to modulate the signal towards an intentional goal state. 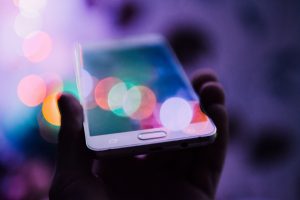 In my research project, I focus on feedback from heartbeats. The smartphone biofeedback app will allow users to listen to their heartbeats on their own or as part of a mindfulness exercise. In addition, the app will allow users to engage in biofeedback training. In this training, users learn to regulate their breathing to maximise their heart rate variability, i.e., to repeatedly speed up and slow down their heartbeats. By manipulating their heart rate variability, users thereby activate cardiovascular homeostatic reflexes in the autonomic nervous system associated with rest and recovery.

Why a smartphone biofeedback app? 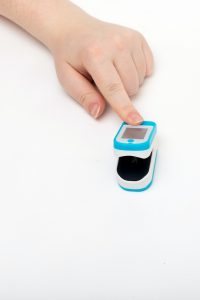 Empirical evidence increasingly suggests that biofeedback has positive effects on a number of psychological conditions, such as anxiety, stress and depression. However, in order to use biofeedback, one needs to spend money on a device. Even though biofeedback devices are becoming increasingly affordable and biofeedback technology is getting integrated into more and more devices, such as smartwatches, the cost of a biofeedback device is likely to affect the adoption of the technology by less affluent parts of the population and in developing countries.

Yet, large parts of the population already possess a computing device with multiple sensors and cameras, i.e. a smartphone. In the UK, around 80 percent of the general population own a smartphone. This means that if my project succeeds, a large part of the population will for the first time have access to sophisticated biofeedback technology by downloading an app from an app store onto their phone. 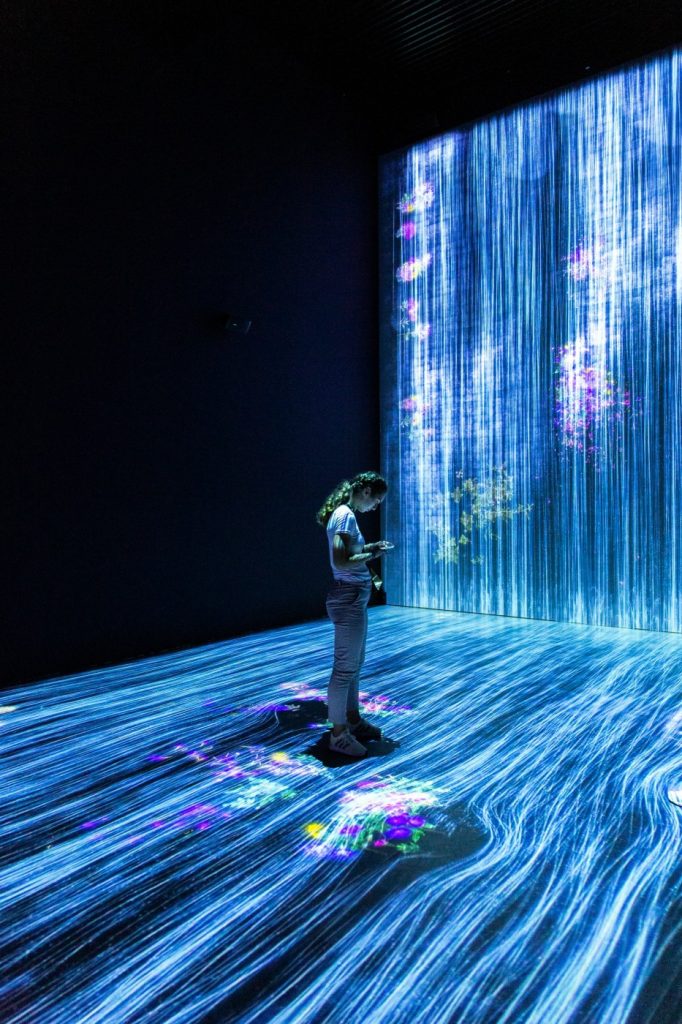 In order to leverage the technological capabilities of smartphones for biofeedback, I am using state-of-the-art machine learning technology. The problem is how to detect heartbeats in noisy sensor data. My solution is to use convolutional neural networks, a technology that is used in many applications to recognize faces, license number plates, or species of mushroom. This approach requires large amounts of data for training of the neural network.

In the first phase, I am working on creating a dataset for machine learning. The next steps include neural network design and training as well as experimental validation, where my heartbeat detection technology will be compared against the gold standard of electrocardiography. Finally, I will focus on developing the biofeedback app and measuring its efficacy to reduce stress.

If you’re interested in my work and would like to know more or collaborate on large-scale heart rate data projects, please get in touch.

The Science and Technology Committee heard suggestions for areas of inquiry that could be undertaken by the committee. Below are the ideas that were pitched to the Committee for further investigation.  END_OF_DOCUMENT_TOKEN_TO_BE_REPLACED

For those of you interested in health education, applied psychology or physical activity promotion, read on.

Last week I attended the annual Intervention Mapping course at Maastricht University, which provides a framework for decision-making when planning, conducting and evaluating complex interventions. As a physiologist and early career researcher the course introduced me to using a theory-led, systematic approach when devising multidisciplinary interventions. From my perspective, what to consider when planning an exercise/physical activity programme to improve mobility (and holistically quality of life) for frail older adults living in care home residences. Intervention Mapping comprises the following steps:

It should be noted that this framework relates mainly to collaborative healthcare projects, involving multidisciplinary team-working with individuals that may include: behavioural scientists, physiologists, Allied health professionals, care home staff and council officials.

As a ‘cog in a wheel’ (i.e. physiologist working within healthcare teams), personally Intervention Mapping has influenced my methodological perspective and will inform my long-term research, but will have little impact in the short-term for laboratory-based studies. For the behavioural scientist or applied psychologist interested in health promotion, the course would be a great benefit. For everyone else considering healthcare projects incorporating behaviour change I wholeheartedly recommend. Plus, Maastricht is a cultural and gastronomical delight.

If you would like further information on the course and framework, let me know. Department of Sport and Physical Activity