Dr. Pramod Regmi, Senior Lecturer in International Health and Interim Global Engagement Lead in the Department of Nursing Sciences, was invited last weekend to speak at the Third Global Nepali Health Conference, London.  He taught on ‘How to write a scientific paper’ with Dr. Om Kurmi from Coventry University and Dr. Bibha Simkhada from the University of Huddersfield (and Visiting Faculty at BU’s Faculty of Health & Social Sciences). 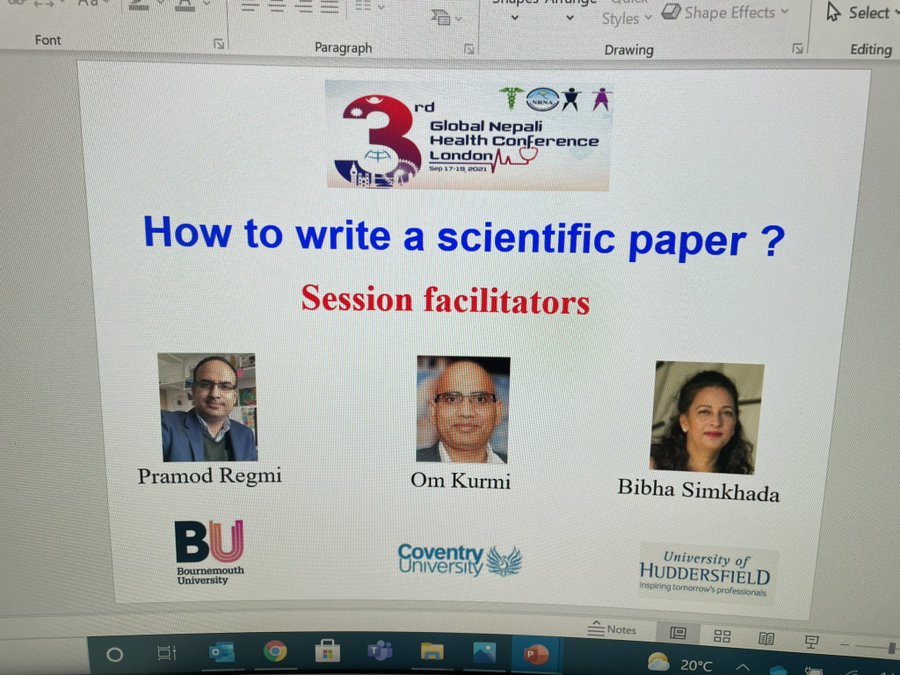 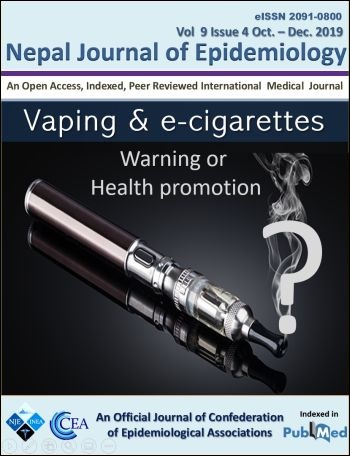 The Nepal Journal of Epidemiology published its final edition of 2019 today, on the final day of the year.  This issue included an editorial co-authored by BU academics and BU Visiting Faculty.  The editorial ‘Vaping and e-cigarettes: A public health warning or a health promotion tool?’ [1] addresses the topical public health question of what to make of vaping.  On the one hand, vaping is generally regarded as less harmful than smoking tobacco, but on the other hand, it can be a gateway drug to cigarettes and the process of vaping a range of chemicals it in itself not harmless. 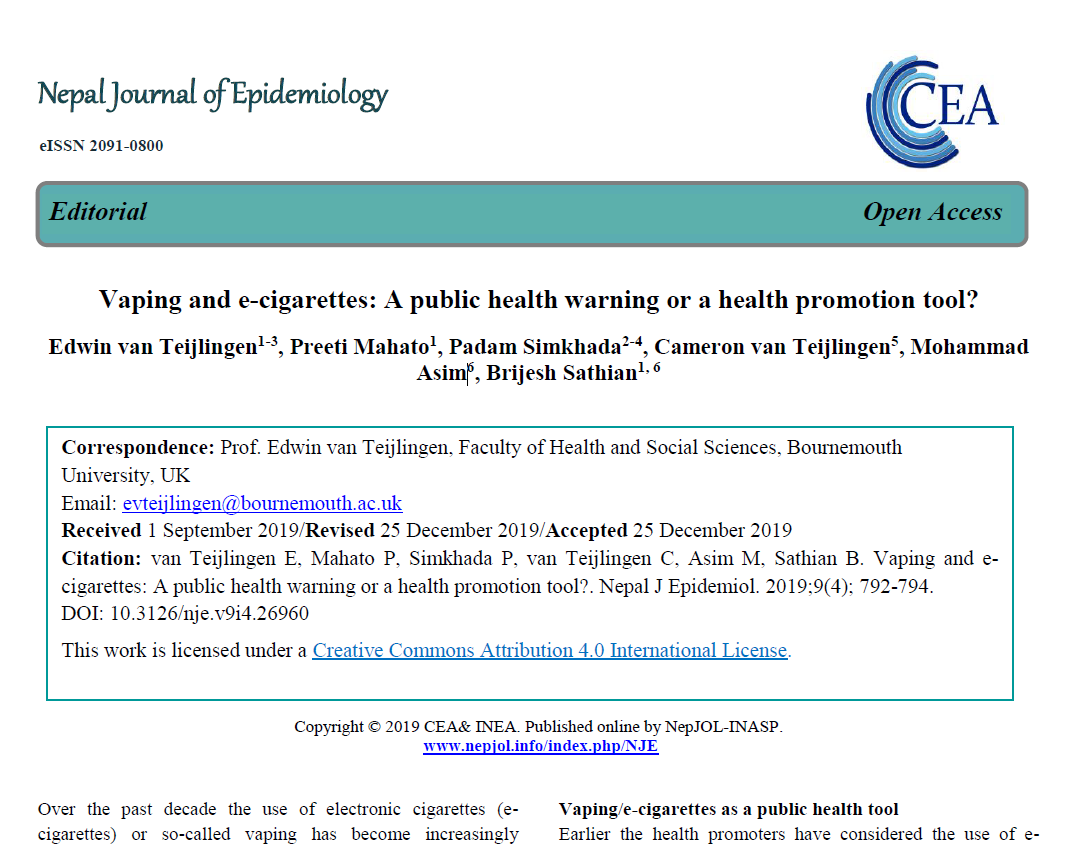 The month saw the publication of the latest collaborative paper between FHSS academics, BU Visiting Faculty and NHS clinicians.  Our paper ‘Design errors in vital sign charts used in consultant-led maternity units in the United Kingdom’ [1] is available for a free download from Elsevier until August 28, 2019. Till then no sign up, registration or fees are required, click here.

The authors, as part of the Modified Obstetric Warning Score (MObs) Research Group, lead by BU Visiting Faculty Richard Isaac, argue that obstetric observation charts in the UK contain poor design features. These charts have common errors such as an inappropriate use of colour, poor alignment and axes labelling.  Consequently, these design errors render charts difficult to use and could compromise patient safety. The article calls for an evidence-based, standardised obstetric observation chart, which should integrate ‘human factors’ and user experience. Congratulations to two members of Bournemouth University’s Visiting Faculty Minesh Khashu and Jillian Ireland on the publication of their paper ‘Fathers in neonatal units: Improving infant health by supporting the baby-father bond and mother-father co-parenting ‘ which has been accepted this week by the Journal of Neonatal Nursing. [1]  Prof. Minesh Khashu is the lead Consultant Neonatologist and Jillian Ireland is Professional Midwifery Advocate and both are based at Poole Hospital NHS Foundation Trust.

This is second paper in this field by these BU Visiting Faculty members after the 2016 publication of a literature review. [2] In the final week of 2016 the journal Health Prospect published our editorial on the importance of introducing nursing CPD in Nepal [1].  This editorial is based on a collaborative study between BU, Liverpool John Moores University (LJUM), Manmohan Memorial Institute of Health Sciences (MMIHS) in Nepal, Nepal Nursing Council (NNC), and the Nursing Association of Nepal (NAN).  The BU part of the study is led by Dr. Catherine Angell based in the Centre for Midwifery, Maternal & Perinatal Health (CMMPH) and funded by a small grant from BU’s Centre for the Excellence in Learning.  Two of our co-authors from LJMU Dr. Bibha Simkhada and Prof. Padam Simkhada are also Visiting Faculty at BU.  The project is a true FUSION project as the Research, will inform Education (in the form of CPD) which will in turn improve Practice (of the many thousands of nurses in Nepal).

Health Prospect is an Open Access  journal and therefore freely available for any one to read online. On Friday the third cohort of UK volunteers will leave Heathrow as our education project ‘Mental Health Training for Community-based Maternity Providers in Nepal’ [1].  Mental health issues are a seriously underfunded and understudied area in Nepal, and not just in the field of maternity care. [2]   Our project is a collaboration between the Centre for Midwifery, Maternal & Perinatal Health (CMMPH), Tribhuvan University (Nepal’s oldest university) and Liverpool John Moores University (LJMU). The project receives funding from DFID, and is managed through THET and supported locally in Nepal by a charity Green Tara Nepal. Previous Bournemouth University Research Blogs (see here! and here! ) and blogs by one the earlier UK volunteers retired health visitor Ish Fawcett (click here!) have outlined details of our project.  Bournemouth University has a great history of developing and delivering innovative education projects with the support of its Centre for Excellence in Learning (CEL).

The April issue of the Journal of Neonatal Nursing will publish the latest article written by a combination of Faculty of Health & Social Sciences staff and Visiting Faculty.  The paper ‘Experiences of fathers with babies admitted to neonatal care units: A review of the literature’ offers a systematic narrative review on issues affecting fathers, whose babies are admitted to neonatal units. [1] The authors include Visiting Faculty Poole Hospital NHS Foundation Trust midwife Jillian Ireland and Prof. Minesh Khashu (consultant neonatologist) and FHSS staff Jaqui Hewitt-Taylor, Luisa Cescutti-Butler, and Edwin van Teijlingen.  Twenty-seven papers in this interesting review highlighted four key themes: (1) stress & anxiety; (2) information (or lack thereof); (3) gender roles and (4) emotions.  This paper adds to the growing literature (and understanding) of the role and place of men in maternity care generally and for fathers of babies in neonatal care in particular.