Thanks to a Charity Impact grant from BU we were able to catalogue the sounds we collected from the rainforests in Indonesia, with charities FKL (Lueser Conservation Forum) and SOCP (Sumatran Orangutan Conservation Program). Tom Davis developed autonomous acoustic recording devices for this project that we tested out in the forests during a 2-week trip in April/May 2019. AudioRecorder by Tom Davis in Forest

We only had 2.5 days of continuous recordings for 3 recorders but that was enough to boggle the mind. The grant supported 68 hours of Isobel Bramer’s time, who spent most of this time listening to the recordings. We had hoped to record far more but battery and time-stamp issues meant the recorders stopped recording after 2.5 days and some older files were overwritten because of a bug in our date setup (that hadn’t been there when we tested the systems in the UK!). Cataloguing these recordings, however, was still a daunting task and a warning for what’s to come now that we have 10 super-recorders and 7 of these initial prototypes set up out in the field for full 3 month sampling. Even now, we are confused about one recorder that repeatedly recorded what sounds like the heavy breathing of a sleeping mammal. The recorder was placed at the base of a tree, which with hindsight was of course the ideal location for a mammal’s burrow because the many vines and herbs under the dense tree kept the area dry. Listening to it in the Faculty of Science and Technology’s special ‘sound’ room, it actually also sounded like the vibration of insect wings (if these were very close to the microphone).

Another recording clearly registers a gun shot in the middle of the night. Unfortunately, hunting still occurs in this National Park despite it being illegal. Hearing it like this, though, made me think a lot about how these nightly activities may influence the behaviour of the animals we study most, primates and elephants. We were fast asleep, not far from the gun shot but didn’t know about it. If we’d have followed our siamang (small ape, Symphalangus syndactylus) group the next day, would we have found them in a different sleeping tree from where we left them the night before because of the nightly intrusion? Other, non-human intrusions can have similar effects that we would not always be aware of and recording sounds from the forest will hopefully provide us with some knowledge of the invisible forest life. 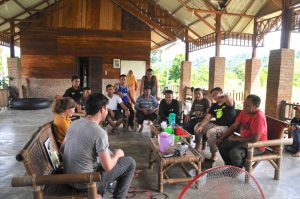 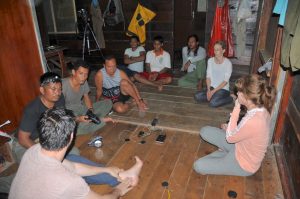 We are still working on a webpage that will allow everybody to listen to the more exiting as well as standard background sounds. For now, Isobel has run out of funded time to achieve this unfortunately.

This project is closely linked with so many other activities that LEAP is developing with partners in Indonesia and the UK that it is too much to review in one blog post. We are especially exited about the boost to our research that came from working with artist company Invisible Flock , and our science-art project Inaudible (https://invisibleflock.com/portfolio/inaudible/).

To learn more about LEAP, please visit our websites: https://www.bournemouth.ac.uk/research/projects/leap-conservation-exploration and https://go-leap.wixsite.com/home. Although I struggle to keep the news sections up to date.